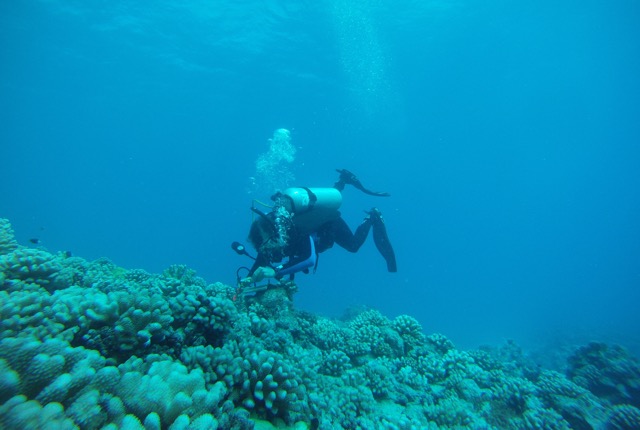 While the El Niño of 2016 devastated coral reefs along its path in the Pacific Ocean and Caribbean Sea, CSUN marine biologist Peter Edmunds found it left significantly less damage to the coral reefs in near the island of Moorea in French Polynesia. The results of his research were recently published in the online scientific journal PLoS One. Photo courtesy of Peter Edmunds.

California State University, Northridge marine biologist and coral reef expert Peter Edmunds has found a bit of hope among the coral reefs near the island of Moorea in French Polynesia.

Scientists were worried that the El Niño of 2016 would devastate coral reefs along its path in the Pacific Ocean and Caribbean Sea with its higher water temperatures. While that proved true for many reefs, including the Great Barrier Reef off Australia, Edmunds and a team of CSUN biology graduate and undergraduate students found that not only did Moorea’s reefs survive, but the effects of El Niño coincided with the recruitment of new corals to the reef.

“In the case of Moorea, coral recruitment in the El Niño year of 2o16 was basically the highest we’ve recorded in the past decade,” Edmunds said. “Part of the take-home message is that there are multiple voices in the scientific community, and many of those are describing the devastating effects of El Niño — but the key is we can’t paint the picture with a single color. While El Niño was very bad in many locations, Moorea tells a slightly different story.” Peter Edmunds heading out to do research on the coral reefs of French Polynesia near Tahiti. Photo courtesy of Robert Carpenter.

Edmunds has spent decades studying the reefs around Moorea, recording their health and the vibrancy of the reef’s life and surrounding ocean waters. That familiarity placed Edmunds in the perfect position to assess the impact of El Niño of 2016.

He headed a one-year National Science Foundation (NSF) RAPID-funded research project to see if the rising water temperatures would affect the growth rate and arrival of coral larvae to the reefs of Moorea. The results of his study, “Unusually high coral recruitment during the 2016 El Niño in Moorea, French Polynesia,” was published in Public Library of Science (PLoS) One, the international, open-access, online scientific journal.

Edmunds said his research team directed a lot of uts focus into why the coral reefs of Moorea appear to be resilient.

“We went into the El Niño year thinking, ‘Moorea has been pretty darn resilient when devastated by cyclones and coral-eating sea stars, but El Niño is going to be particularly bad in 2016,’” he said. “Coming so soon after the major cyclone in 2010, we feared the effects would be very bad.”

Edmunds’ knowledge of the area and its history provided a perfect opportunity to try to answer that question within the framework of the Moorea Coral Reef Long-term Ecological Research Site, which is shared with the University of California, Santa Barbara.

“This is exactly why long-term studies of coral reefs are so important,” he said. “The only way we know that these disturbances have these effects and can evaluate the magnitude of the effects is because we’ve got the history that we can go through and use to assess the changes.”

Edmunds said there are two possible reasons why Moorea’s reef colony survived El Niño as well as it did.

“Despite the forecast for very warm water in Moorea, the warming of the seawater was much more moderate than people had expected,” he said. “El Niño created a very clear signal. If you looked at 2016, it was very different from other years, but in Moorea it wasn’t sufficiently different to create high temperatures that were catastrophic for corals.”

Another critical factor lies in the area’s history, he said, pointing to the reef’s “remarkable” recovery from an infestation of crown of thorns sea stars and the cyclone in 2010. Covered in long, poisonous spines, the sea stars are a well-known and voracious predator of corals.

“It’s like [the reef] was riding a wave of coral recovery, and it had reached the peak of the wave when El Niño struck,” Edmunds said. “That wave of success allowed the corals to survive through El Niño.”

He drew the analogy to a relatively healthy person who comes down with a severe illness. A healthy person is better able to survive the illness because his body is better equipped to deal with the assault than someone who is not as healthy. The same applies to coral reefs, Edmunds said.

“In the reverse, in St. John in the U.S. Virgin Islands, I think the coral community there has taken a nose dive,” he said. “They were getting toward the bottom of trough and then, boom, they have been hit by two Category Five hurricanes. The responses to the disturbances in St. John are going to be very, very different.

“Whether they are on the crest or in the trough — whether they are healthy or they are debilitated —  has a huge impact on how the reefs are going to respond to these disturbances,” Edmunds said.

The next step, he said, is understanding “why Moorea and the reefs that surround it were doing well when El Niño came?”

Edmunds said the obvious answer may lie in the fact that there are not many people who live in the middle of the South Pacific in French Polynesia. But at this stage, that is only a hypothesis, one that he invites other scientists to explore.