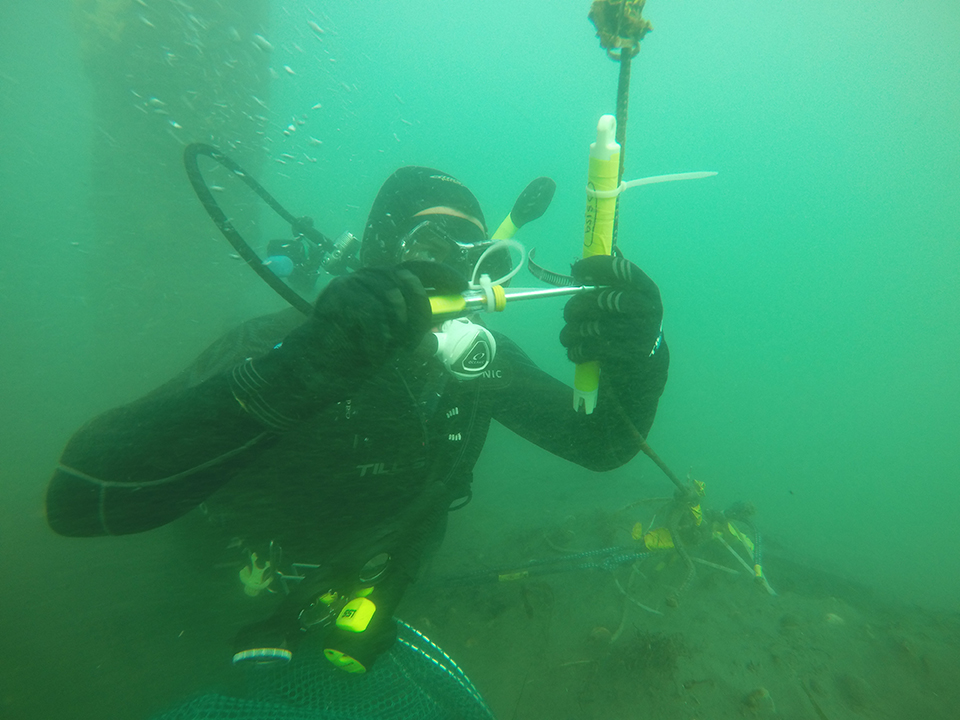 CSUN marine biologist Kerry Nickols will be maintaining the Southern California Coastal Ocean Observing System (SCCOOS) automated shore station on the Santa Monica Pier, as part of an effort to monitor the health of the ocean off the Southern California coast. The station is part of a network of similar stations across the state’s coast. The photo above is of a diver servicing submerged instrumentation at the Cal Poly Pier shore station. Photo by Ryan Walter, California Polytechnic University.

The nondescript building near the end of the boardwalk is easy to miss amidst the cacophony of brightly colored tourist attractions that line the Santa Monica Pier. In a tiny room next to the harbor office, you will find cables and electronics transmitting real time data from underwater below the pier as part of the Southern California Coastal Ocean Observing System (SCCOOS) automated shore station. 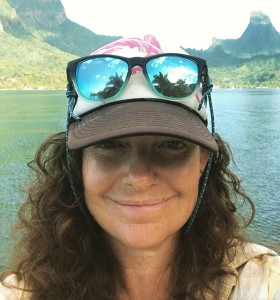 The Santa Monica Pier site is one of four such stations set up on piers along the Southern California coast to monitor the health of the region’s beaches, and it has just become the responsibility of California State University, Northridge marine biologist Kerry Nickols.

“It is a huge honor to be part of a system that is actually part of a bigger effort, a national network really, that is keeping an eye on the nation’s oceans and has allowed us to detect changes in our oceans related to climate change,” Nickols said. “The information we collect is used by policymakers to make informed decisions that affect our oceans and coastal communities, but it is also used by surfers and your average beach visitors, who want to know what is happening in the waters off our coasts.”

Nickols’ appointment as principal investigator for the Santa Monica Pier shore station is part of a more than $7 million grant the National Oceanic and Atmospheric Administration’s (NOAA) U.S. Integrated Ocean Observing Systems awarded SCCOOS and the Central and Northern California Ocean Observing System (CeNCOOS) to ensure continued monitoring of the health of the waters along California’s coast. The grant was part of $41 million NOAA awarded across the country to support ocean observation.

The California Ocean Observing Systems was established in 2004 as a consortium of scientists and stakeholders who recognized the need to provide real-time oceanographic observations and other data to diverse regional communities in California, from city managers, urban planners and other decision-makers to scientists and traditionally unrepresented and underserved communities.

The consortium set up automated shore stations on piers along the state’s coast to collect data from moored sensors placed underwater. The sensors provide real-time information on such things as temperature, salinity, chlorophyll and water level. The other SCCOOS automated shore stations are located at Stearns Wharf in Santa Barbara, Newport Pier in Newport Beach and Scripps Pier in La Jolla. Data collection at all four sites began in 2005 and can be found at the SCCOOS website.

“Surfers regularly visit the website to check on the health of the water, as do beachgoers,” Nichols said. “But, more importantly from my perspective, the historical data provides a great foundation of information that helps researchers and policy makers understand the health of the ocean off California’s coast and how it’s being impacted by climate change. The information collected gives us insight into what we can expect in the future as the climate continues to warm.”

Nickols will be enlisting students to help her maintain the shore station’s equipment and ensure the continuous collection of data. She also hopes to tap into their creativity in identifying what additional data they can collect with the sensors.

“The equipment is already in place, we just need to figure out what new information we want,” she said.

One of her goals for the Santa Monica Pier station is to make the public more aware of the important role it plays in monitoring the health of Southern California’s beaches.

“It’s located on one of the most popular piers in Southern California, yet few people know it’s there or what it does,” Nickols said.

She wondered if she could turn the dives her team makes at least once a month to clean the sensors into teaching moments for visitors to the pier.

“We actually have some pretty big fish hanging out under the pier when we’re scraping off things growing on the equipment,” she said. “All this stuff goes flying around in the water, and the fish are pretty happy with their free meal. Sometimes, when we look up, we can see people leaning over the pier’s railing, and they are surprised to see us. It seems like the perfect opportunity to teach them about what we’re doing and how they can help to keep our oceans healthy.”