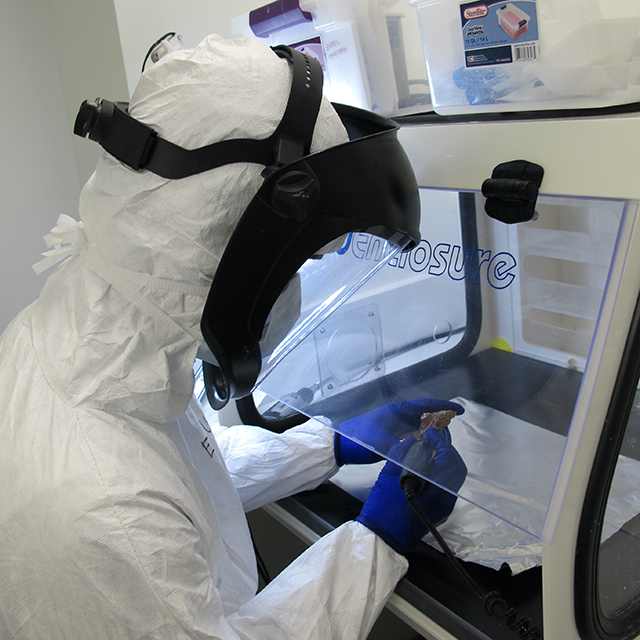 Assistant professor of biology Eduardo Amorim, pictured here taking a look at a bone fragment from an ancient human, has received a $1.7 million grant from the National Institutes of Health to study how ancient epidemics impacted the DNA of humans, which may provide insight into how these pathogens — bacteria and viruses — evolved, and how the human genome has changed in response. Photo courtesy of Eduardo Amorim.

Epidemics have afflicted human populations for centuries; whether the Black Death, caused by the bubonic plague, that spread through Europe in the 1350s and decimated entire towns and villages. Or the measles, smallpox, and other diseases Europeans brought with them to the Americas that devastated indigenous communities throughout the north and south continents.

Eduardo Amorim, an assistant professor of biology at California State University, Northridge, has received a $1.7 million grant from the National Institutes of Health to study how those ancient epidemics impacted the DNA of humans, which may provide insight into how these pathogens — bacteria and viruses — evolved, and how the human genome has changed in response.

“By examining the molecular and evolutionary basis for how pathogens interact with their human hosts, we may be able to improve our understanding of the dynamics of human infectious diseases and help identify ways to treat those diseases and inform public health policies to combat future epidemics,” Amorim said. “Using ancient DNA obtained from archaeological specimens, we can directly assess the signature of these interactions in the past, and identify pathogen and human genetic variation lost with time.” 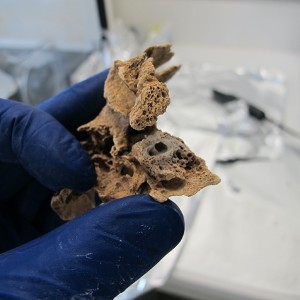 By examining the DNA in bone fragments and teeth from ancient humans, assistant professor of biology Eduardo Amorim hopes to understand how pathogens may have changed the genetic make-up of humans who survived ancient pandemics. Photo courtesy of Eduardo Amorim.

Amorim’s project centers on developing new resources — datasets and methods — for characterizing the interaction, at the genetic level, between the pathogens and the humans who contracted the disease, whether they died or survived, by studying the ancient DNA of those impacted by the epidemics hundreds of years ago. Amorim is partnering with UC Santa Cruz associate professor of anthropology Lars Fehren-Schmitz on the project.

Amorim said he will be enlisting CSUN students to assist him and Fehren-Schmitz as they extract DNA from the teeth and bone fragments of ancient humans and analyze it to see how pathogens may have changed the genetic make-up of humans who survived ancient pandemics.

“What we are looking for is genetic data,” Amorim said. “What are the genetic variants that are associated with immunity that persist in genes of humans living today? And how may those variants have contributed in helping some people resist epidemics from similar pathogens in later years? This will help us understand what are the biological mechanisms in humans that lead to either resistance or susceptibility to pathogen epidemics.”

Amorim noted that 2021 marks the 20th anniversary of publications the draft of the human genome sequence, known as the Human Genome Project, which revealed information about the number of genes, mutation rates and patterns of genomic variation in the human genome. The project empowered research into the genetic roots of human disease, impacted drug research and even challenged the idea of what was a gene.

“The field is still relatively new, and there is still a lot to be learned,” he said, pointing out that Human Genome Project broke down the make-up of humans of European descent.

“My real interest is to study the evolution of humans by understanding the biological mechanisms in humans that lead to either resistance or susceptibility to pathogen pandemics,” he said. “The field of genetic research needs to diversify if we are truly going to understand the genetic make-up of all humans.”

To that end, Amorim is working with Tábita Hünemeier, a professor of genetics and evolutionary biology at the University of São Paulo, Brazil, to gain an understanding of the genetic ancestry of indigenous people, as well as those of Asian and African descent.

“My colleagues in the field of human genetics, in general, have been studying European populations almost exclusively,” Amorim said. “It has only been in the past five, maybe 10 years, that we’ve begun to realize that we are contributing to the health disparity because our focus has been on European populations. We know the genetic architecture of many medically relevant traits in Europeans, such as how they metabolize drugs or respond to therapeutic treatment. But we don’t have the information for all populations.

“Some of us in the field of evolutionary biology, including me, want to study more diverse populations because we want to understand not only how humans in general react, respond to pandemic pathogens and how we overcome them, but how some populations may differ. There will be similarities, but there is the potential for differences. This information could help us understand, more broadly, how different humans adapt to pathogens.”