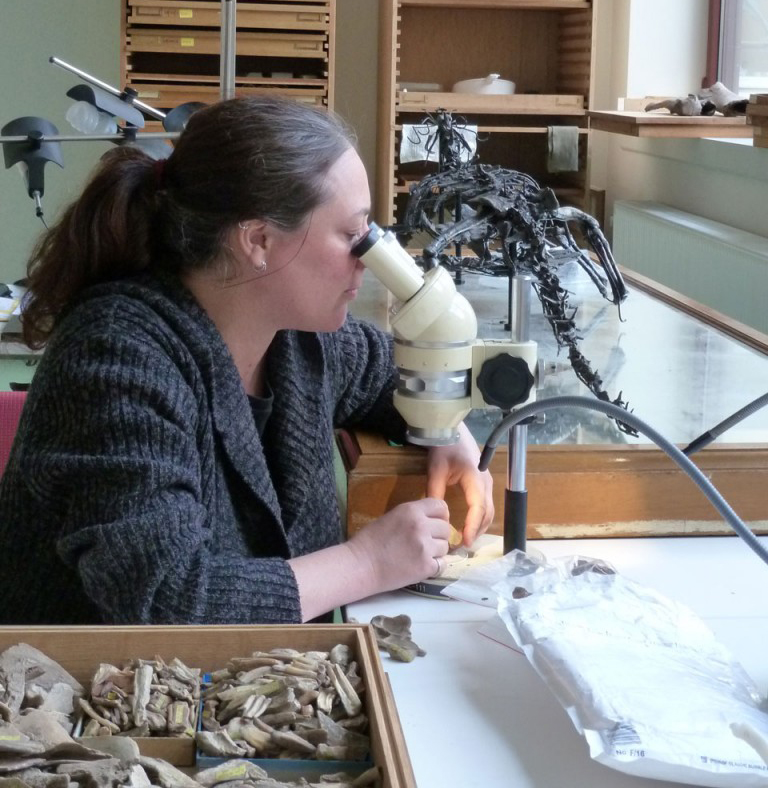 An international team of researchers that includes California State University, Northridge anthropologist Hélène Rougier has reconstructed the oral microbiomes of different primates, among the Neandertals and modern humans — including the oldest oral microbiome ever sequenced from a 100,000-year-old Neandertal. In the process, the team has found some unexpected clues about human evolution and health.

The researchers compared ancient dental calculus — commonly known as tooth tartar or plaque — and identified 10 core bacterial types maintained within the human lineage for more than 40 million years. The team also discovered some similarities between the oral microbiomes of Neandertals and those of early modern humans, including the starch digestion capability of some bacteria, which long has been believed to be human specific. This new finding suggests a dietary change that occurred in a common ancestor.

“It was surprising to see that both microbiomes — those of the Neandertals and those of early modern humans — were so similar,” Rougier said. “What was unexpected was finding some bacteria that are helpful in digesting starch. Typically, we assume that such bacteria would have been acquired with the development of agriculture, because that’s when early modern humans started eating more starches such a grains and cereals. Something we never really attributed to Neandertals doing. This tells us that they may have eaten more starch than we thought.”

The findings, “The evolution and changing ecology of the African hominid oral microbiome,” were recently published in the Proceedings of the National Academy of Sciences (PNAS).

Rougier is one of dozens of researchers from 41 institutions around the world working together for more than a decade to explore prehistoric life in Europe, hoping to gain perspective on what human life was like before recorded history. Their disciplines span the spectrum, from biological anthropology and archaeology to biochemistry and genetics. Rougier said the interdisciplinary approach provides an opportunity to bring new perspectives and raise questions that individually the researchers may not consider or be able to resolve.

Their latest study included fossilized dental plaque found on a sample Rougier extracted from fragmented bones discovered in a cave in Goyet, Belgium, in 1868. The bone fragments were not identified as Neandertal until Rougier did so more than a decade ago.

“They are just fragments that had been cannibalized,” she said. “They are so very small, yet we have been able to extract so much information from them.”

The fragments have been used to determine the Y chromosome sequences of Neandertals and ancient humans known as Denisovans; the diets of early modern humans and Neandertals, and offered insight into the history of Neandertals living in Eurasia 39,000 to 47,000 years ago.

In this instance, researchers were able to identify 10 groups of bacteria in the fossilized dental plaque that have been members of the primate oral microbiome for more than 40 million years, and that are still shared between humans and their closest primate relatives. Many of these bacteria are known to have important beneficial functions in the mouth and may help promote healthy gums and teeth. A significant number of the bacteria are so understudied that they don’t even have a species name.

While humans share many oral bacteria with other primates, the oral microbiomes of modern humans and Neandertals are very similar. However, there are differences, particularly at the level of bacterial strains. When the researchers took a closer look at these differences, they found that ancient humans living in Ice Age Europe shared some bacterial strains with Neandertals. Because the oral microbiome is typically acquired in early childhood from caregivers, this sharing may reflect earlier human-Neandertal pairings and child rearing.

Rougier said one of the biggest surprises was the discovery that a subgroup of bacteria, present in both modern humans and Neandertals, appears to have specially adapted to consume starch early in Homo sapiens.

This suggests, Rougier said, that starchy foods became important in the human diet long before the introduction of farming, even before the evolution of modern humans. Starchy foods, such as roots, tubers and seeds, are rich sources of energy. Previous studies have argued that a transition to eating starchy foods may have helped human ancestors grow the large brains that characterize the species.

Rougier said she has been astonished by all the information she and her colleagues have been able to glean from the Goyet bone fragments.

“I remember a colleague telling me, ‘Oh, why are you going to look through animal bones like this? Maybe you’ll find something, but if there was anything significant, someone would have found it already,’” she said. “When you look at the fragments, they don’t look like much.

“The reality is, if we had the complete, or near complete, remains of a Neandertal, the curator probably wouldn’t let you drill into the skull and bones to get samples,” Rougier continued. “But these fragments are already in pieces. We can extract samples without doing much damage, and actually had to in order to securely identify them as Neandertals. They’re so broken already because they were eaten.

“In a way, this has come full circle,” she added. “We have these bones because the Neandertal they belonged to was someone’s meal. Now his bones are telling us information, not only about his diet, but what the Neandertal diet shared with early modern humans and other primates.”