“Don’t let the statistics define you,” said Lawson, who is being recognized today by the CSU Board of Trustees as the Chancellor Emeritus Charles B. and Catherine Reed Scholar. “Whether it’s the color of your skin, your country of origin, being the first one in your family to go to college or your family’s circumstances, you can beat the statistics. You can be different.”

Lawson received the honor, named for the former CSU Chancellor and his wife, in recognition of his “superior academic performance, exemplary community service and significant personal accomplishments,” according to an announcement from the CSU Chancellor’s Office. As part of the honor, Lawson will receive a $10,000 scholarship. 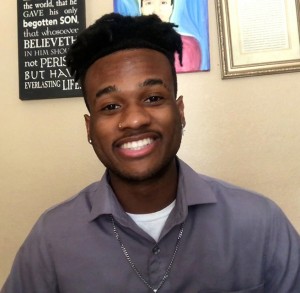 Lawson, 20, of Perris, said he was humbled at being named this year’s Reed Scholar.

“I know I was competing against a lot of brilliant scholars, not just from my campus but from across the CSU,” he said, adding that the honor is a testament to how hard he and his family have worked to turn the tragic death of his older brother, David Josiah Lawson, into something positive.

Lawson was only 17 when his older brother, David Josiah Lawson, a sophomore at Humboldt State University, was killed at an off-campus party in the mostly white town of Arcata in Northern California. The assailant has yet to be prosecuted.

Lawson, his mother and 16-year-old sister continue to lobby for justice on his brother’s behalf. They have turned the support they have received, including monetary support through the sale of t-shirts in memory of his brother, into a platform to feed and clothe those struggling financially in Humboldt County. In fact, Lawson said, a portion of his scholarship will be going to those efforts.

“We continue to fight for justice, and we have a lot of confidence that good will come of this and that the situation eventually will be resolved,” he said. “In the meantime, we are waiting patiently and doing our best to benefit the community.

“When people see us, they see our skin color and assume the worst stereotypes,” Lawson continued. “What we are trying to do is show them the nurturing, loving side that my brother was able to see every single day when he was home. We are not going to be hostile. We are doing peaceful protests, fixing up the county by proving food and clothing for people who are struggling.”

He also spends time speaking at Black Lives Matter events, sharing his story and talking with people, hoping to cross racial and cultural barriers and help people understand that the pain caused by injustice is universal and that there are peaceful ways of making positive change.

It’s that desire to build bridges and help people that led Lawson to psychology.

“I knew I was interested in psychology while I was in high school, before my brother passed,” he said. “I’ve always loved talking to people, and helping people feel ‘normal.’ That’s how I see psychology, helping people not feel isolated or feel like the issues they are going through are unique to them. I know a lot of people think, ‘Am I the only one going through this? Am I different from everybody else?’ And that starts to make you feel isolated from the rest of the world. It’s something I’ve personally gone through. With my brother’s passing, I got a new reason for why I picked psychology — to be able to guide, counsel and assist other families that have gone through similar situations.

“Sad things occur in life, and they happen to everyone,” he said. “They happen when you least expect and to people who, never in a million years, think it could happen to them. I feel like it’s my job to show them that it’s possible to still live your regular everyday life, still be the supportive, loving person you are, while you are working to overcome these situations.”

Lawson has plans of going to medical school and becoming a psychiatrist. To that end, he spends hours each day on his studies — despite a job at a nearby lake and working as an actor part time — determined to get the best grades he can.

“I don’t know if I want to work with families, just adults or just kids, because I feel like I can have a positive impact on all those age groups,” he said. “I’m still pretty young, so I have some time to think about it. I just know I want to use my experiences to make a difference in people’s lives.”