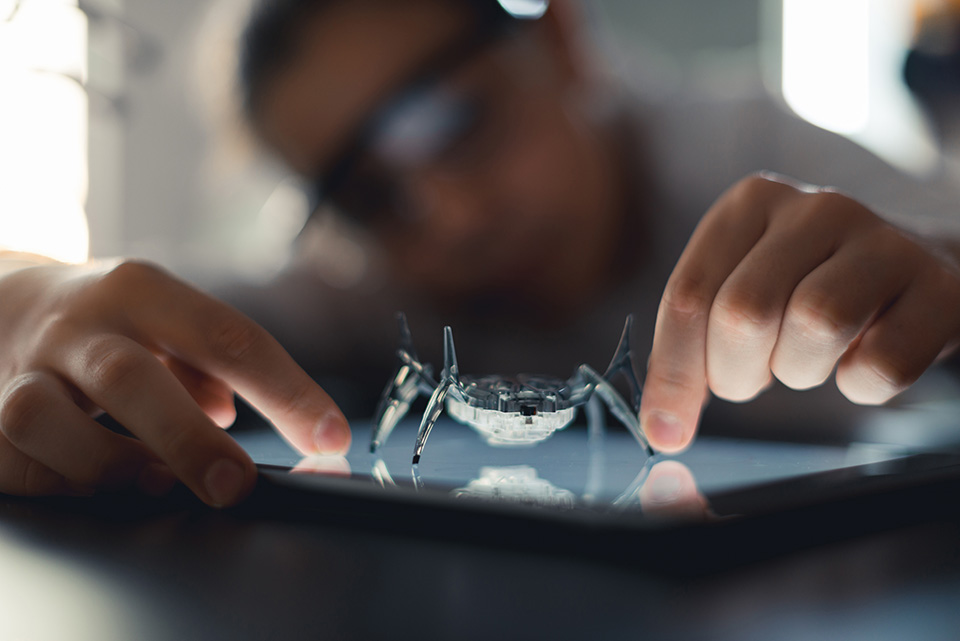 CSUN’s Nhut Ho has been awarded a $538,000 grant from the U.S. Department of Defense to develop swarms of fully autonomous robots capable of planetary exploration, and has terrestrial applications in such areas as search and rescue, mining and AI/Autonomy in extreme environments. Photo edit, Georgijevic, iStock.

California State University, Northridge mechanical engineering professor Nhut Ho, founding director of the NASA Autonomy Research Center for STEAHM (ARCS), has been awarded a $538,000 grant from the U.S. Department of Defense to collaborate on the “Human Swarming Teaming Platform for Research in Human Automation Trust and Reliance” project.

The project involves developing swarms of fully autonomous robots capable of planetary exploration, and has terrestrial applications in such areas as search and rescue, mining and AI/Autonomy in extreme environments.

“For this particular project, we are exploring how to build a swarm of robots that can be put into different unknown environments and learn to navigate these environments to complete tasks,” Ho said. “In order to accomplish this, the autonomous robots will be designed to mimic the behavior seen in insects that swarm, such as ants.

“We were inspired by the behaviors that we see in swarms of ants and bees that self-organize, create clever solutions for different tasks, work in groups of different sizes and have the ability to complete the tasks even when members fail,” Ho said. “The next thing is figuring out how humans can use the insights gained to design complex robotic systems for really challenging missions.”

As part of the project, the autonomous robots will be used in research projects that ARCS is collaborating on with a team from the Jet Propulsion Laboratory that won first place in the Defense Advanced Research Projects Agency (DARPA) Subterranean Challenge. The international competition seeks new approaches to autonomously and rapidly map, navigate and search underground environments.

Ho said, the technology being developed will change the way mankind explores space and planetary systems.

“For missions such as exploring the Martian surface and voids, a swarm of simple, small robots can complete complex tasks much more efficiently and effectively than a single large rover,” Ho said. “Then, there’s the question of how much can you do with a rover versus if you have a swarm of machines. Imagine how much exploration you can do and how much data you can collect that you wouldn’t otherwise be able to by sending just one single rover up there.”

At CSUN, multiple interdisciplinary groups of students from departments across the university are working on the project. Students from the Departments of Mechanical and Computer Engineering, Art, and Psychology are building the robot and refining the virtual-reality systems being augmented for the robots. Public relations students are helping market the program, and students from the journalism department are working with STEM (science, technology, engineering and math)-related majors to improve their ability to write about technology.

“This project gives our students a tremendous opportunity to work with the best scientists in the world, and it exposes them to the most advanced technology out there,” Ho said. “Most importantly, it gives students a chance to gain valuable, hands-on experience that prepares them well for the workplace.”
Collaborators for the project include NASA’s Jet Propulsion Laboratory, Boston Dynamics, Intel, Clearpath Robotics, Telerob, Velodyne and Silvus Technologies.