Their report, published in the Nature journal Oncogene, identifies PEAK1 upstream and downstream factors that create a “shield,” which blunts the effectiveness of FDA-approved treatments for this aggressive malignancy.

In 2015, Kelber’s CSUN research group was also the first to report that PEAK1 played a critical cancer “support wall” function by mediating the earliest stages of breast cancer metastasis — notably, that initial work attributed a tumor-promoting function to PEAK1 from within the cancer cells themselves. 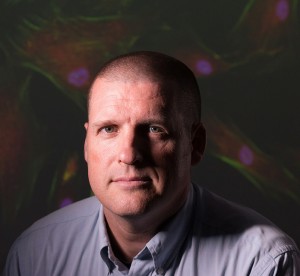 “In any cancer, there are tumor cells and non-tumor, tumor-associated cells,” Kelber said. “For the first time, we have been able to demonstrate that PEAK1 also promotes breast cancer progression from within the non-tumor cell population of the cancer — specifically, from within fibroblast cells. We also found that PEAK1 controls the ability of these fibroblasts to produce a protein hormone known as activin-A, which then causes neighboring breast cancer cells to become resistant to the HER2-targeting drug known as lapatinib (TykerbTM). We were able to identify three new populations of HER2-positive breast cancer cells that emerge in response to PEAK1/activin-A signaling during the course of lapatinib treatment — markers that improve the overall fitness of the cancer cells and prevent lapatinib from working properly.”

As a side note, it was Kelber’s Ph.D. advisor, the late Wylie Vale, a Salk Institute professor and a world-renowned expert on brain hormones, who discovered/characterized activin-A and the first transmembrane serine/threonine kinase receptors for the TGFbeta superfamily of protein hormones to which activin-A belongs.

A major priority of the National Institutes of Health – National Cancer Institute’s Cancer MoonshotSM initiative is to develop ways to overcome cancer’s resistance to therapy. In this regard, Kelber noted that targeted therapy resistance is a major concern in patients with HER2-positive breast cancer.

“It’s promising that patients with this type of breast cancer have options other than non-specific chemotherapies,” he said. “The downside is that these therapies don’t always work. Findings from this study, however, suggest that therapy combinations incorporating inhibitors of these fibroblast and tumor cell pathways will exploit vulnerabilities in these “shields” to restore therapeutic efficacy.” 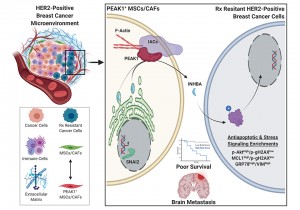 An illustration of how the PEAK1 gene can promote cancer metastasis and therapy resistance in aggressive HER2-positive breast cancers. Image courtesy of Jonathan Kelber.

Kelber said the findings may also have implications well beyond HER2-positive breast cancer since therapy resistance is a significant clinical problem for many cancer types.

While this line of inquiry formally began in Kelber’s CSUN Developmental Oncogene Laboratory in 2017 by former graduate student Sarkis Hamalian, the first piece of data collected that was included in the manuscript was collected by Kelber’s first CSUN graduate student, Megan Agajanian, back in 2014. The international nature of this collaboration is underscored by the fact that data for this manuscript were also collected with Ioannis Zervantonakis during Kelber’s 2017 ASCB-MAC-sponsored visiting professorship at the Harvard Ludwig Center with Joan Bruggeand with Jonathan D. Humphries during Kelber’s 2019-20 Fulbright Cancer Research UK scholarship to work at the University of Manchester Wellcome Centre for Cell Matrix Research with Martin Humphries.

“Our understanding of the molecular mechanisms of lapatinib resistance is not well defined,” she said. “For me, the most interesting part of the project was to explore whether activin-A is necessary to drive PEAK1-dependent MSC-induced lapatinib resistance in HER2-positive breast cancer cells. This work is distinctive and significant in addressing outstanding questions about heterogeneity within the breast cancer microenvironment and which potential targets may aid in developing efficacious treatments for HER2-positive metastatic breast cancer.”

“There’s much more to explore beyond the HER2-positive breast cancer microenvironment,” Runa continued. “Our findings that PEAK-1 drives activin-A-dependent expansion of breast cancer cells may help to define more breast cancer subtypes in the future and illuminate new mechanisms for treating the disease.”

Gamez added that, for him, “the most interesting things about working on this project were to explore the correlation between cytokine activin-A and PEAK1, as well as uncovering the clinical significance of PEAK1 expression in the stroma of HER2-positive breast cancer and how this connection leads to lapatinib resistance in these tumor cells.”

“This report is important, as the findings have implications for potential targets that may pave the path towards developing treatments and targeted therapy for patients with HER2-positive metastatic breast cancer as well as other subtypes of breast cancer,” he said. “This report is also significant in further developing our understanding of the microenvironment surrounding HER2-positive breast cancer cells — this understanding can help us identify any additional signaling pathways that lead these cells to become resistant to lapatinib or other treatments approved against this malignancy.”

Additional Kelber laboratory co-authors on the paper include postdoctoral fellow Robert Güth, graduate students Francesca Sanchez and Justin Molnar, and undergraduates Eric Vickers and Tuan Nguyen. Additional non-CSUN co-authors include project collaborators Drs. Anupma Nayak with the Division of Endocrine and Oncologic Surgery and Julia Tchou, Professor of Surgery at the Perelman School of Medicine at the University of Pennsylvania.