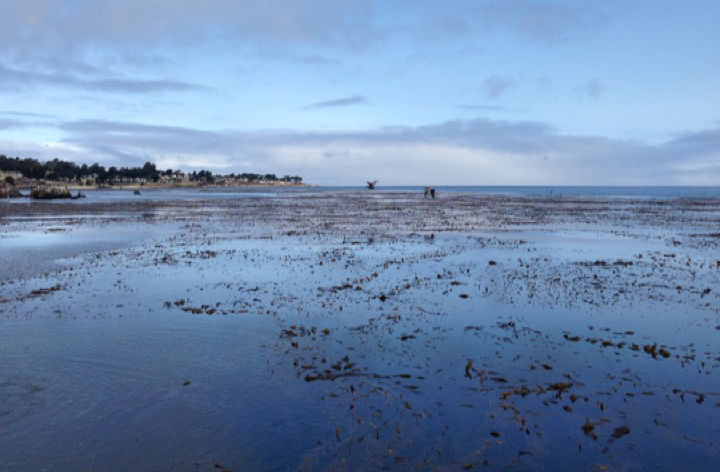 Nickols and researchers at Stanford University, with funding from the National Science Foundation, found that the canopy, which is near the surface of the water, of the kelp off of California’s central coast is reducing the level of ocean acidification in its immediate area.

“The study is just the beginning of trying to understand the role kelp forests can play in reducing ocean acidification,” Nickols said. “Our findings can help us identify what areas have the most potential for ocean acidification reduction which can inform decisions about protection and restoration of California’s coast.” 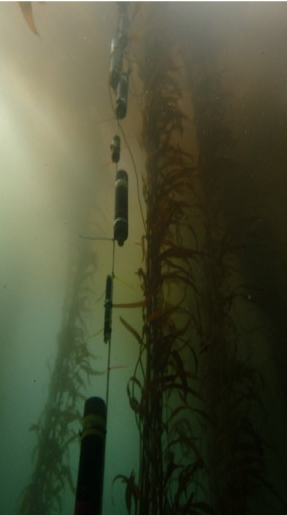 Nickols, Traiger and their colleagues deployed an array of monitoring instruments along kelp forests in California’s Monterey Bay, including on its surface, to measure the water’s temperature, acidity and oxygen over the course of days and weeks. Photo by Heidi Hirsh.

When kelp photosynthesizes — the process in which plants convert light energy using carbon dioxide into chemical energy, including oxygen — carbon dioxide is removed from the seawater, reducing acidity, and oxygen is produced. In addition to ocean acidification, climate change and nutrient pollution are also driving down oxygen levels in the ocean.

The question Nickols and her colleagues were exploring is whether kelp photosynthesis can help reduce dangerous levels of carbon dioxide in the ocean and protect the local marine ecosystem from acidification.

To find that out, Nickols and her colleagues deployed an array of monitoring instruments along kelp forests in California’s Monterey Bay, including on its surface, to measure the water’s temperature, pH (acidity) and oxygen over the course of days and weeks. The researchers took into account the strength of off-shore winds and the movement of deep, cold, acidic, low-oxygen water into the shallow kelp environment.

Nickols said no one before had ever captured kelp forest geochemical information like this.

“The reality is, if you put monitoring equipment right on the surface of the ocean, you are just asking for a boat to drive along and rip it off,” she said. “And, in Monterey Bay, there are a lot of sea otters who like to play with stuff on the surface. There were a lot of good reasons why this hadn’t been done before. But if we are going to understand kelp’s role in ocean acidification, then we should look at where most of the kelp biomass is, which is at the surface.”

By monitoring areas of the kelp forest at the surface, inside and near the ocean floor, Nickols said the researchers gained an appreciation for how regional features of the ocean — such as upwelling driven by seasonal winds that bring with them nutrient-rich, cold and acidic water — drive the kelp’s chemical response to acidification.

“The information collected by our monitoring instruments might be different if we collected data off Palos Verdes, which doesn’t have the upwelling,” she said.

However, she and her colleagues observed the highest acidity in deep water, indicating that the impact of the kelp canopy in reducing surface acidity does not extend to where some of the greatest acidification takes place, at the ocean bottom.

“The ability for kelp to lessen acidification stress may be greater at the surface,” Nickols said, adding that while the study answers some questions about the role kelp can play in combatting ocean acidification, it also raises others.

“We still have a lot to learn, but we are establishing a baseline from which to measure future findings,” she said. “The overarching goal of all the projects is to collectively look at the information so that we can predict when and where we will see the biggest chemical boost from kelp, which, in turn, can help us manage and identify places that might be worthy of protection or restoration in California.”

A forthcoming study led Traiger will shed even more light upon the importance of the kelp canopy for mitigating ocean acidification and understanding when and where the signals are strongest, Nickols said.