Painstaking examination of thousands of underwater photographs by San Fernando Valley high schoolers has led to the revelation that a species of Caribbean coral — deemed by marine biologists as a “winner” in the struggle against natural disasters and warming ocean waters — may now be losing the battle with climate change.

California State University, Northridge marine biologist Peter Edmunds enlisted the help
of students in Craig Didden’s science classes at Viewpoint School in Calabasas and Karl Frank’s biology students at Campbell Hall in Studio City to help find out what actually was going on with Porites astreoides — commonly known as mustard hill coral — on the south coast of St. John in the U.S. Virgin Islands. 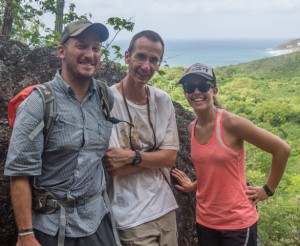 “Over the years, as natural disasters and increasing climate change have taken their toll on the coral reefs off St. John, mustard hill coral seemed to be surviving, and maybe even thriving,” Edmunds said. “People said it seemed to be a ‘winner.’ It doesn’t die, it seems to grow quite well, and it’s hanging in there throughout all that has happened. We decided to dig more deeply into that notion that a species of coral can be a ‘winner’ under these difficult conditions, and we wanted to find out what is really going on with this coral.

“What we found is the growth over the course of three decades isn’t what we thought,” he continued. “Yes, mustard hill coral started off doing pretty darn well, totally consistent with being a ‘winner.’ But then we found that about a decade ago it was showing signs of ‘losing,’ and we were finding a lot of that. Where there were once large colonies of mustard hill coral, we were finding more and more colonies that were small. The problem with small colonies is that they are more vulnerable and have a very high chance of dying.”

Their findings, “Over three decades, a classic winner starts to lose in a Caribbean coral community,” can be found in the latest edition of the journal Ecosphere.

Didden called the opportunity to work with Edmunds and his team “an incredible learning experience for my students.”

“Oftentimes students don’t realize all of the hours that go into the work involved in these projects,” Didden said. “They are used to seeing a picture in a textbook or reading an article but never get the back story of the data. This opportunity has really opened up their eyes to the world of science and research, and for some it has sparked an interest in a possible carreer in a STEM (science, technology, engineering and mathematics) field.

“Hands-on learning and application of concepts to real-world issues has always been an important part of my teaching style, and Dr. Edmunds and his lab have allowed me and my students to be involved in projects that matter,” he continued. “These projects are not something that they could have done just by looking at a textbook, it’s forced them to get out of their comfort zones and learn valuable skills.” 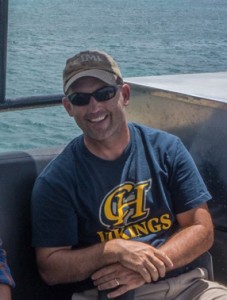 Karl Frank on his way to St. John. Photo courtesy of Peter Edmunds.

“Working with Dr. Edmunds, Craig and a number of graduate students has been rewarding for me and my marine science students,” Frank said. “Dr. Edmunds and his students have visited Campbell Hall a number of times over the past several years and shared their research with us in a way that made it possible for seniors in high school to engage in meaningful, hands-on data analysis.

“Students learned to use ImageJ, which is National Institutes of Health-funded software, to measure the relative surface area of mustard hill coral colonies on several hundred images taken in the field during successive seasons in St. John,” he continued. “Students consistently remarked that this experience helped bring one aspect of marine science research alive for them, and a number have gone on to major in marine science during their undergraduate years.”

Edmunds’ collaboration with the high school science teachers began more than a decade ago as part of an effort in which departments in CSUN’s College of Science and Mathematics partner with local schools to find ways to inspire young people to consider careers in science, technology, engineering and mathematics.

Edmunds — who does most of his research in tropical seas, either off the coast of St. John or in the waters of the island Moorea in French Polynesia — was looking for a way to engage the high school students in serious scientific research, despite his inability to take these students to the tropics. Using photographs to assess the health of mustard hill coral on the reefs of St. John was the perfect solution.

Edmunds has spent more than three decades studying the health of the coral reefs of St. John. Over that time, he and fellow researchers had taken thousands of photographs of the reef to document and chronicle the coral living in its ecosystem.

The digital photographs, he said, presented an opportunity to engage the high school students in “real scientific research,” while, at the same time, testing the theory that there are “winning” and “losing” coral on present day reefs.

The students, under the supervision of Edmunds’ graduate students, first learned how to identify the coral, and distinguish it from other species, then learned how to use computer programs to measure the size of the corals in each picture. Once training was complete, they started to examine thousands of photographs recorded every year for 27 years and measure the size and location of each mustard hill coral in the pictures.

“To give you an idea of what I was asking them to do,” Edmunds said, “consider if I had photographs of the entire United States and I asked you to help me find out how many people were living in the United States? What is their average height? How many are babies? How many are teenagers? Well, that’s what they did with the mustard hill coral of St. John.”

The high schoolers’ work was checked by the graduate students, who had no qualms about sending the students back to redo work when there were errors or inaccuracies. Edmunds would check the work of the graduate students to ensure the census of mustard hill coral was working well and that the data was accurate.

“It’s hard work, at times tedious, but that is what real science is — checking and rechecking to ensure that that data is accurate,” Edmunds said. “And the conclusions of what they found is that this particular coral, while maybe a winner only 20 years ago, now looks like it’s losing the battle with environmental stressors.”

Edmunds said that he would like to have a similar relationship with the San Fernando Valley’s public high schools as he has with Viewpoint and Campbell Hall.

“We need to find a way to get them the resources and their faculty the time so that their students have the same opportunities,” he said.