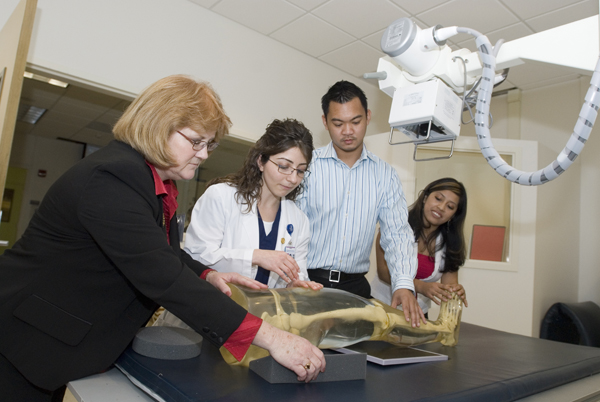 Students study with a professor in a CSUN science laboratory. Photo by Lee Choo.

In the male-dominated world of science and mathematics, California State University, Northridge is seeing an increase in the number of women in math and science fields. At the 2014 College of Science and Mathematics commencement ceremony, the dean personally noted that 80 percent of degree recipients in the college’s honors program were female.

Home to more than 18,400 female undergraduate students — about 55 percent of the student body — university officials are encouraging women to make strides in fields they may not have considered. For CSUN’s 2014 Wolfson Scholar — the second woman from the sciences in the last decade to receive the award — the road to biochemistry was paved with professorial guidance.

With no one offering guidance while she was in community college nor from family as she is a first-generation college student, finding the path to science was one that started with a spark for McKinzie Garrison, who graduated with a bachelor’s of science degree in biochemistry earlier this year. Garrison took a chemistry course at random and found that she “had never felt so in tune with a particular subject.”

Her passion for the field led her to become a Wolfson Scholar, the highest honor granted to a CSUN graduate annually.

“Most of my support came from my professors at CSUN,” Garrison said. “They were incredibly encouraging. Dr. (Karin) Crowhurst, Dr. (Daniel) Curtis and Dr. (Paula) Fischhaber — just to name a few — were excellent to talk to regarding the field. CSUN is lucky to have such excellent professors in the Department of Chemistry and Biochemistry.”

The College of Science and Mathematics is recruiting women heavily to relieve the “gap” of women that is present in the industry.

“Personally, I’m aware of the big gap [in science] — it is male-dominated,” said Jerry Stinner, dean of the college. “This isn’t good for science. We need that balance. We need different perspectives. And there is a growing awareness among faculty.”

As of the fall 2013 semester, more than half the students enrolled in CSUN’s College of Science and Mathematics — 55.9 percent — were female, according to the university’s Office of Institutional Research.

Of the college’s departments, physics and astronomy and mathematics have seen the most growth at the graduate level. The chemistry and biochemistry and biology departments — with a 61.4 percent female population — have seen more than 5 percent growth combined in the past decade. Additionally, the graduate biology program is comprised mostly of female students, which has been the trend for the past several years, according to department chair Larry Allen. In fall 2013, 70 percent of first-time freshman in the department were female.

CSUN professors regularly encourage women to continue their education and careers in science and mathematics through a variety of programs, such as the one Donna Sheng heads in the physics and astronomy department.

“To help female majors feel more at ease or more welcome, I lead a women’s physics major support group where all the women majors are encouraged to meet every Friday,” she said. “It is an opportunity for our female students to socialize with each other and to study together. We really get to know each other and support each other.

“At CSUN, professors are all trying to provide hands-on research experiences for female students, as well as all students in general,” Sheng said.

Two programs in the geology department also are making headway for women entering Earth sciences. Research Opportunities for CSUN students (ROCs), organized by professor Joshua Schwartz, encourages geology undergraduate women and minority students to pursue research projects with faculty mentors in the department, broadening members’ understanding of career and graduate school opportunities in the field. Schwartz is currently working with three female students and one male student on presentation posters to be displayed at the Geological Society of America annual meeting in October.

The second program, Geological Experience for Minority Students (GEMS) works to recruit students, particularly women and minority students, who show an interest in geology to the department.

“[Students] are given support and guidance for tutoring info to get through the most difficult classes of chemistry and math,” said Dayanthie Weeraratne, a geology professor and the GEMS faculty coordinator. “The research support and scholarships we offer…seek to encourage and support minority students in Earth sciences.”

Science is not the only area of study where female students are receiving strong mentorship. The Association for Women in Mathematics, for which CSUN mathematics professor Magnhild Lien serves as executive director and faculty coordinator for the university’s student chapter, encourages women and girls to study the mathematical sciences, achieve success in careers in the field and promote equal opportunity and treatment of females in the mathematical sciences.

“Much of our work is concentrated on supporting graduate students and early career women through… successful programs, [including] 1) workshops held at the annual meeting of the American Mathematical Society, [the] Mathematical Association of America and the Society of Industrial and Applied Mathematics, 2) travel grant program and 3) mentoring grant program,” said Lien in an email to Stinner.

CSUN is mirroring the national trend of a rapid increase in women receiving degrees in science and engineering. According to a January report from the publication “Campus Technology,” the physical sciences are seeing growth by nearly two-thirds in female doctorate recipients.

Female students are also getting a boost from an increasing number of potential female mentors in the College of Science and Mathematics. According to Stinner, the number of women on the faculty of several departments has doubled in some areas and continues to grow in others. In geological sciences, there are more women than men in the department — which the dean believes to be an occurrence unique to CSUN. The number of female chemistry professors has grown from one to four since 2005. In the biology department, women make up 40 percent of the faculty.

“Most of the sciences are moving to be 50/50 — very different from when I started out,” Allen said. The department is leading the increased rate at which women are hired in math and science fields. “Over half of new hires in the last 5 to 10 years are women who are highly qualified, dedicated educators and researchers.”

According to Allen, CSUN women are also prominent in science societies as officers of note and gaining recognition as renowned academic and career researchers.

“I think our culture has shifted toward a more gender-neutral view of women in science, which has encouraged the accomplishments of women in the field,” Garrison said. “It also helps to see women accomplish things once believed to be positions for men. For example, in 2009, Ada Yonath received the Nobel Prize in chemistry for her work on the structure of the ribosome [a molecular mechanism within all living cells]. Attitudes have changed, and women’s personal perspectives of themselves have helped drive them toward the pursuit of scientific discoveries and knowledge.”

CSUN’s College of Science and Mathematics is home to several nationally recognized programs where students gain valuable experience through hands-on work using the latest technologies and equipment. Students also have an opportunity to co-author publications with faculty members and present their research results at national and international meetings. In addition to ensuring that the region and the nation has a pool of talented scientists capable of assuming leadership roles in a knowledge-based, multicultural society, the college also prepares a number of students to attend medical, dental and pharmacy schools.

“Enrollment in the college just keeps growing,” Stinner said . “We’ve grown 50 percent in the last five years and we are predicted to be 373 [students] over target. When I ask students, ‘why all the interest?’ [some have] told me technology and science are everywhere around us and it seems to be the future. They want to be a part of it. … Students [also] want to get a degree where they can get a job — it’s economics. I’m delighted to see such an interest in [science and math].

Serving more than 38,000 students each year, CSUN is one of the largest universities in the United States. CSUN ranks 10th in the country in awarding bachelor’s degrees to underrepresented minority students, fifth nationally in awarding master’s degrees to Hispanic students and enrolls the largest number of deaf and hard-of-hearing students of any U.S. state university. CSUN’s 171 academic programs and engaged centers enjoy international recognition for excellence. CSUN currently partners with more than 100 institutions of higher education in 22 countries around the globe and attracts the largest international student population of any U.S. master’s level institution. Situated on a 356-acre park-like setting in the heart of Los Angeles’ San Fernando Valley, the campus features modern educational buildings and world-class LEED Gold-certified performing arts and recreational facilities recognized as among the best in the country. CSUN is a welcoming university that champions accessibility, academic excellence and student success.

“We’ve got great programs here and I don’t think people are disappointed,” Stinner said. “They get a tremendous amount of mentoring, which they would not get at an R-1. … Once they’re here, I think they’re pleasantly surprised. …I think it’s a good place to get a great education.”

Biology, Chemistry and Biochemistry, College of Science and Mathematics, Featured