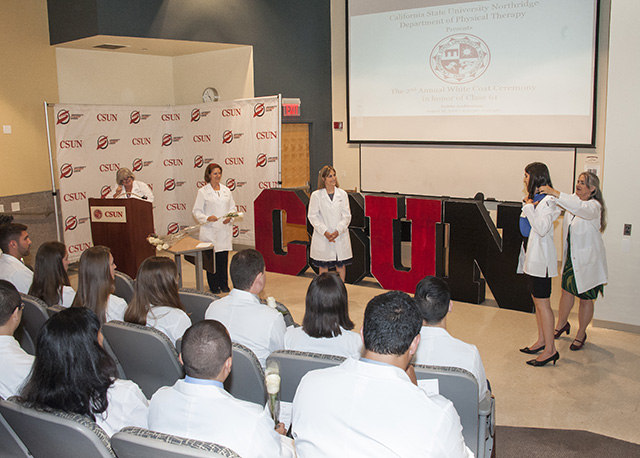 The College of Health and Human Development hosted a celebration for potential future doctors of physical therapy, as the newest class received its official white coats, representing the start of the students’ three-year journey through the Doctorate of Physical Therapy (DPT) program at California State University, Northridge. CSUN’s DPT program graduates more than 90 percent of its students, and 100 percent gain employment in the field upon completion — a rewarding statistic, since physical therapy is a nationally competitive field, according to Program Director and Department Chair Janna Beling.

“The ritual of the white coat started in medicine in the early 1990s [and] oftentimes, it is offered after the first didactic year,” she said. “It’s supposed to signify the transition from classroom learning to the clinic. We do such a good job here at CSUN of weaving experiential learning, clinical learning and service learning into the curriculum that we offer [the ceremony] in the beginning.”

The students will have three internship opportunities in the program, with options such as serving in a hospital in Malawi in June, working with the Los Angeles Dodgers through spring training, and assisting in local trauma, outpatient, pediatric and rehabilitation facilities. Out of 850 applicants, 32 were accepted into the DPT program.

Tara O’Rourke, a first-year student in the DPT program, explained that her passion for physical therapy had been strong since she was young, but suffering through a severe accident in 2014 and building a relationship with her physical therapists while she recovered increased her drive to work with others who have experienced similar injuries.

“I got hit by a car,” O’Rourke said. “I broke my tibia, fibula, tore my ACL and meniscus, dislocated my elbow. I was interested in physical therapy and athletic training, but being in the accident made me want to work with more severe cases. It was just so rewarding seeing what’s possible through physical therapy. I want to be an example of that.” A new DPT student receives her white coat, symbolizing the beginning of her doctoral path, August 2016. Photo by Luis Garcia.

Doctoral students selected for the program met a high threshold of criteria, including experiential hours of work in the field, which Beling said are vital to the students’ success.

“Physical therapy is a very hands-on profession,” she said. “It’s the type of job in medicine where you’re working one on one with patients, you’re working with them for a long period of time and you’re able to build a relationship with them.”