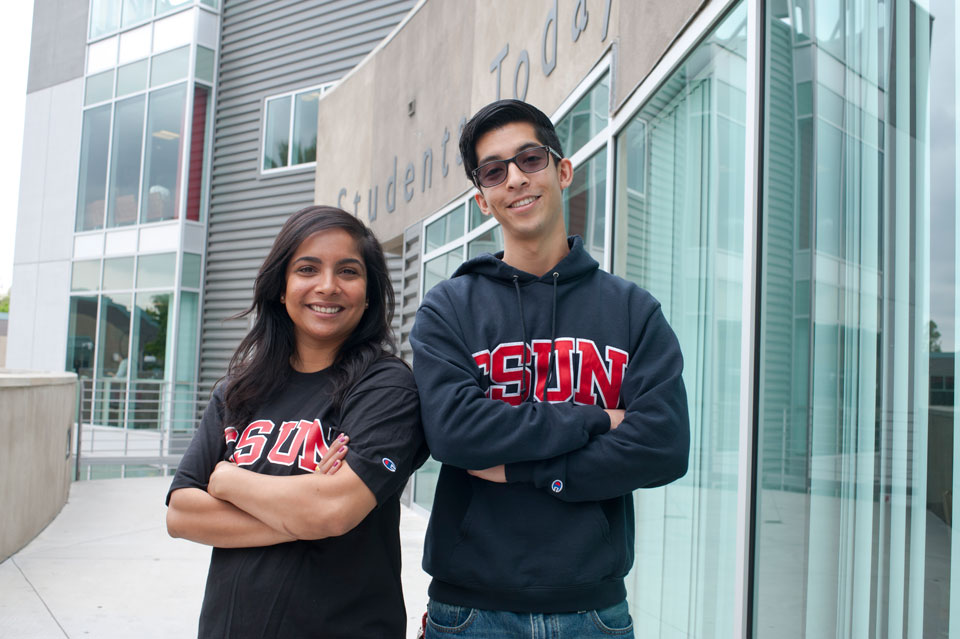 Hoping to tear down misconceptions that college is beyond the reach of deaf students, California State University, Northridge seniors Jaspreet Ghotra and John Pak made university history this year as elected members of CSUN’s student government, Associated Students.

“Last year, a friend of mine who was a senator urged me to run,” said Ghotra. “I was actually really scared because everyone is hearing and I would be the only Deaf candidate running, and [I wondered] would they even accept me? I met the other candidates, who were so open-minded and accommodating that I fell in love with it. I felt really supported with AS and I also saw how AS supports students rights and solves issues for students on campus.”

Pak said he too was drawn to the advocacy done through the student government.

“I’ve been coming to CSUN since my freshman year and I’ve been heavily involved with different organizations, but I always felt like there was something missing,” he said. “Jaspreet knew I was interested and motivated so she told me about applying to be a senator for the College of Education. I wanted to advocate for the college on the school level and the state level.”

“CSUN is a very special place in part because of our culture, which embraces and accommodates deaf and hard-of-hearing students, faculty and staff,” said Crandall. “I realized, when I looked at Jaspreet and John, that the CSUN Associated Students was probably the only college or university student government in the United States, and maybe in the world, except for Gallaudet and Rochester, where there were two student senators who were deaf or hard-of-hearing.”

Ghotra, a graduating senior who is originally from Portland, Ore., said she felt there were few educational choices for a Deaf community member in her hometown. While attending community college and trying to figure out her options, she met a friend who told her about CSUN.

“I was shocked, because I thought there were only two options for me – Rochester and Gallaudet,” she said. “Those were the only ones that I had heard of. CSUN was a perfect place for me as a deaf student. I changed my major from interior design to deaf studies because I love the education that is offered here.”

“In high school I was a straight-A student, but I didn’t really have future aspirations for college,” he said. “I didn’t think it was for me. I couldn’t do that. But my teacher, who is a CSUN alumnus, said that I was bright and smart enough to go to college and that I should check out CSUN.”

Pak is a deaf studies major with emphasis on cultural studies and a minor in psychology.

CSUN’s Department of Deaf Studies is designed specifically to educate our society about the value of human diversity centered on Deaf people and their lived experiences, explained Flavia Fleischer, chair of CSUN’s Department of Deaf Studies. Objectives of the program are to provide students with a deeper understanding of the Deaf community, and of themselves, so that they gain self-confidence and make an impact on the world.

“Deaf people have very limited opportunities to advance their education and often lack the appropriate and necessary support and resources to successfully navigate through education,” said Fleischer. “As a result, many deaf students drop out of college during their first two years.”

Ghotra and Pak have devoted their undergraduate education to changing prevalent perceptions about deaf and hard-of-hearing people, both within the Deaf community and with the population at large. As student senators, they had the opportunity to advocate for the Deaf community.

“Young deaf people feel like we can’t do things because we are deaf and that’s something you just accept growing up. As a result, you ignore things on a bigger scale because you feel like it has nothing to do with you,” said Pak. “There are huge gaps [in equity]. We try to make things equitable for everyone and bring all demographics together to pull everyone up at the same time. That’s definitely our goal.”

“I wanted to show the Deaf community, and the general population, that I am a deaf individual and I am capable. The only person that can stop me is myself,” she said. “[Being in AS,] helped me to think outside of my own box and know that I really can do this. Before I graduate I really want to tell people that deaf students can be involved just as much as hearing people – you have a voice and you can fight so just do it!”

Fleischer noted that Ghotra and Pak’s election as AS senators “indicates our students’ commitment to ensuring that diverse student groups are included in student representation.”

“Both student ambassadors consistently demonstrate service to the campus community on behalf of all deaf and hard-of-hearing individuals,” he said. “Such persistent commitment and energy, over and above academic rigors, while maintaining unwavering civility is a rarity to behold.”

Although John and Jaspreet will soon embark on new adventures, the education they have received at CSUN has inspired them to continue their work in advocacy.

“The norm out there right now are that [deaf] students feel like they can’t go to school, work, college or anything and they just accept that. I want to let K-12 students know that there are opportunities for them in education,” said Ghotra. “We are learning from Professor Fleischer to come at education in a positive way to try and make things equitable.”

“You can’t really educate through criticism, you’ve got to educate through love,” said Pak. “I want to lift the community as a whole and show deaf people that there really is nothing stopping you but yourself. You just have to be persistent and resilient in the hearing world. I can tell them that I’ve been in those same shoes, when I felt like I couldn’t do things because I was deaf. Now I know that I can do it. There’s nothing really to lose, only things to gain, by being involved.”