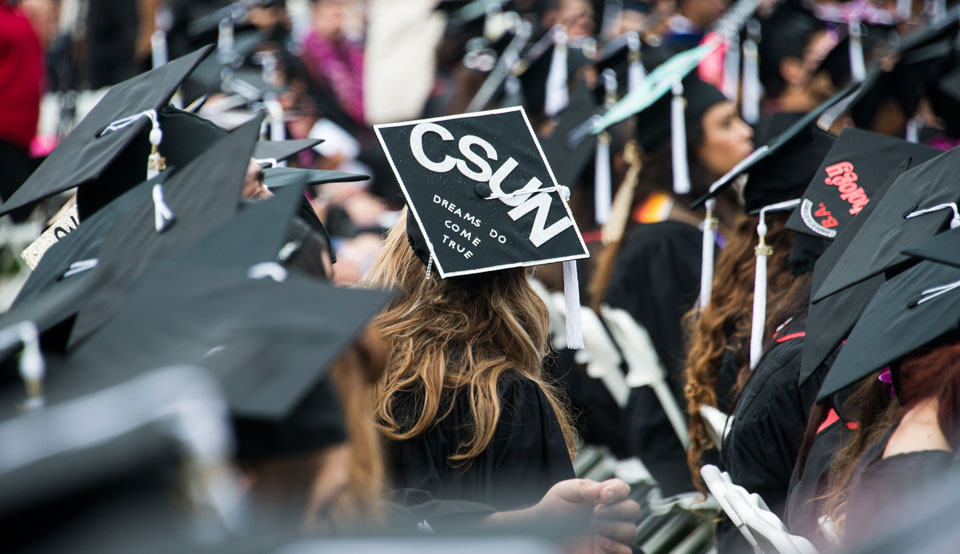 A scene from CSUN's 2015 commencement. Photo by Lee Choo.

Approximately 11,120 graduating students, a university record, are invited to walk across a stage in front of California State University, Northridge’s Delmar T. Oviatt Library to the cheers of family members and friends as CSUN celebrates its 2016 commencement in two weeks.

“Commencement is always an inspiring time at the university,” said CSUN President Dianne F. Harrison. “Students and their families and friends gather with the campus community in what is a momentous and joyous occasion. This time of year provides us with the opportunity to pause and celebrate our students’ significant accomplishments, before they take the next steps toward their future and join the more than 300,000 alumni who have an elevating and lasting impact on the entire region.”

An estimated 8,836 bachelor’s, 2,228 master’s and 56 doctoral degree candidates are eligible to take part in exercises scheduled to begin the morning of Friday, May 20, with the university’s Honors Convocation and conclude the evening of Monday, May 23, with the last of CSUN’s seven 2016 commencement ceremonies. All eight celebrations will take place on the lawn in front of the Oviatt Library.

This year, for the first time, university officials use metal detectors to screen everyone entering the commencement venue as a way of maximizing safety at the events. To ensure the process runs as smoothly as possible, those attending the graduation exercises are asked to arrive at least 90 minutes prior to the start of the ceremony. Guests also are being asked to bring no more than one bag that can be easily searched. Wrapped gifts are discouraged and are subject to being opened if they do not clear a metal detector.

CSUN’s commencement celebrations begin at 8 a.m. on May 20 with the Honors Convocation. This year’s speaker will be alumnus and entertainment industry executive Jim Berk.

From 2006 through 2015, Berk was chief executive officer of Participant Media, a global entertainment company founded in 2004 that focuses on socially relevant film, television, publishing and digital media. During Berk’s almost nine-year tenure at Participant, 67 films were greenlit, including “The Kite Runner,” “Waiting for Superman,” “The Help,” “Food, Inc.,” “Contagion,” “Lincoln,” “Citizenfour,” “Beasts of No Nation,” “He Named Me Malala,” “Bridge of Spies” and “Spotlight.”

A native of Los Angeles, Berk graduated from CSUN in 1981 with a degree in music and worked as a high school music teacher. His passion for the power of music to change students’ lives led him to found the Academy of Music at Hamilton High School. In 1990, he became the youngest principal in the history of the Los Angeles Unified School District when he assumed the helm of Hamilton High School.

In 1992, he became the founding executive of the National Academy of Recording Arts and Sciences Foundation. He later moved on to the private sector, where he led education, hospitality and media companies. In 2006, he combined his talents as a teacher, business leader and entertainment executive to join Participant Media.

In 2007, Berk was recognized with one of CSUN’s highest honors, a Distinguished Alumni Award. In 2011, he received an honorary Doctor of Fine Arts degree from the university.

CSUN’s first commencement ceremony — for graduates of the Mike Curb College of Arts, Media, and Communication — will take place at 6 p.m. on Friday, May 20.

The second ceremony — for graduates of the Departments of Anthropology, Geography and Psychology in the College of Social and Behavioral Sciences and the graduates of the Michael D. Eisner College of Education — will take place at 8 a.m. on Saturday, May 21.

At 6 p.m. on Saturday, May 21, graduates in the remaining departments in the College of Social and Behavioral Sciences — Africana studies, history, political science, public administration, social work, sociology, and urban studies and planning — will take part in CSUN’s third commencement ceremony.

CSUN’s fourth commencement ceremony — for graduates of the David Nazarian College of Business and Economics — will take place at 8 a.m. on Sunday, May 22. An honorary Doctor of Humane Letters will be bestowed on accounting industry leader Harvey Bookstein during the ceremony.

Bookstein is a CSUN alumnus known for his philanthropy, community leadership and achievements in the fields of finance, real estate and accounting. He is recognized as one of California’s most respected certified public accountants, as well as a leading authority in real estate, and estate and tax planning. Bookstein is currently a senior partner of the prestigious national CPA firm Armanino after merging his firm that he co-founded in 1975 — RBZ — last year.

Graduates in the Departments of Child and Adolescent Development, Health Sciences, Kinesiology, Nursing, Physical Therapy and Recreation and Tourism Management in the College of Health and Human Development will take part in the sixth commencement ceremony at 8 a.m. on Monday, May 23.

CSUN’s seventh and final commencement ceremony will take place at 6 p.m. on Monday, May 23 for graduates of the College of Humanities and of the Departments of Communication Disorders and Sciences, Environmental and Occupational Health, and Family and Consumer Sciences in the College of Health and Human Development. An honorary Doctor of Humane Letters will be bestowed on acclaimed civil rights activist the Rev. James Lawson during the ceremony.

Lawson played a leading role in the civil rights movement of the 1950s and 1960s. He trained volunteers in Gandhian tactics of nonviolent direct action. Lawson helped coordinate the Freedom Rides in 1961 and the Meredith March in 1966. While working as a pastor at the Centenary United Methodist Church in Memphis, he also played a major role in the sanitation workers strike of 1968. On the eve of his assassination, Martin Luther King Jr. called Lawson “the leading theorist and strategist of nonviolence in the world.”

In 1974, Lawson moved to Los Angeles to be the pastor of Holman United Methodist Church. He has spoken out against racism, and challenged the Cold War and U.S. military involvement throughout the world. Even after his retirement, Lawson was protesting with the Janitors for Justice movement in Los Angeles, and with gay and lesbian Methodists in Cleveland.

For the past six years, Lawson has been affiliated with CSUN’s Civil Discourse & Social Change Initiative (CDSC) and has taught a course about nonviolent conflict social movements.