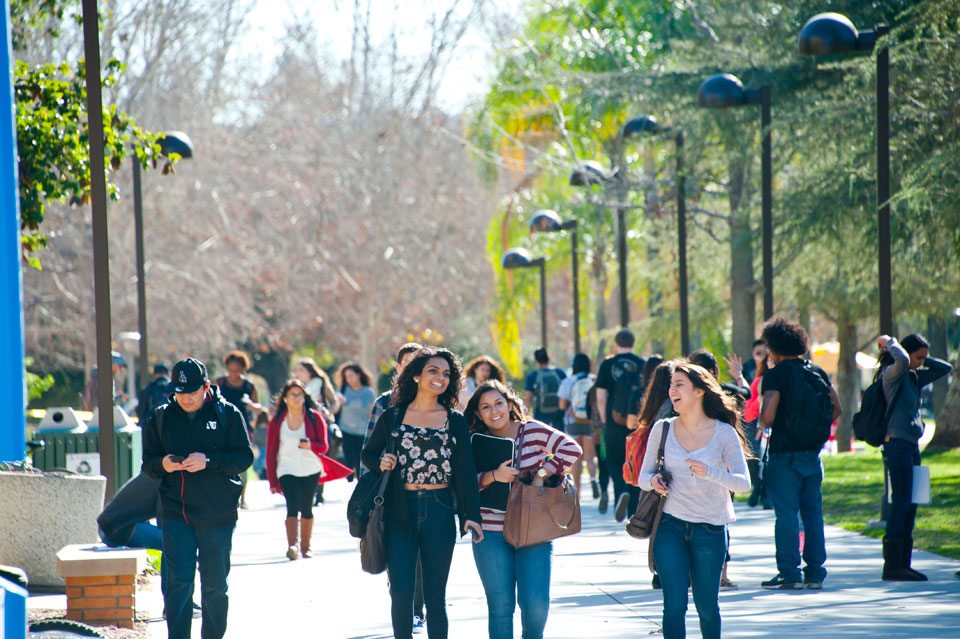 CSUN is partnering with the three San Fernando Valley community colleges to help transfer students complete their associate's degrees while providing them support to earn their bachelor's degrees. Photo by Lee Chool.

A college degree, whether earned at a two-year or a four-year institution of higher learning, opens the doors to career opportunities and provides employers with a skilled workforce that can help propel a company into success.

California State University, Northridge is partnering with the three San Fernando Valley community colleges — Mission, Pierce and Valley — to help CSUN transfer students complete their associate’s degrees while providing them with support to earn a bachelor’s degree. The project, called “Reverse Transfer,” is funded in part by a $1.3 million grant from the Lumina Foundation and the California Community College system, and is a collaborative effort with UNITE LA, an arm of the Los Angeles Chamber of Commerce.

Elizabeth Adams, CSUN’s associate vice president for student success, noted that employers have just as much invested in the success of the area’s college students as its institutions of higher education.

“Getting a degree is important, and associate’s degrees are important,” Adams said. “We have a tendency of treating associate’s degrees as if they don’t mean anything, but they make a difference to an employer when considering job applicants. For one thing, they demonstrate a persistence in completing something, and the requirements for associate’s degrees cover a breadth of general education classes that provide the foundational skills all college graduates should have.”

The completed associate’s degree will hopefully demonstrate to the transfer students that they have the ability to earn their bachelor’s degrees as well, said Tami Abourezk, CSUN’s assistant vice president of undergraduate programs, who is working with Adams on the project.

The Lumina Foundation, whose mission is to expand student access to and succedd in education beyond high school, designated 17 sites nationwide — called Talent Hubs — in which it is funding coordinated projects between colleges, universities and nonprofits to find nontraditional ways of helping students earn their degrees.

The Los Angeles effort is centered around an innovative approach of retroactively awarding associate’s degrees to students who dropped out of CSUN after transferring from a community college.

Adams said the project will initially focus on students who have transferred to the university from one of the three community colleges and are struggling academically at CSUN or who took the wrong pre-requisite courses while at community college for their intended major at CSUN.

CSUN officials, including graduate students in the university’s Michael D. Eisner College of Education, are reaching out to those students to see if any of the classes they took at CSUN would apply toward their associate’s degrees, and re-connecting them with their community colleges if that is what they need.

Throughout the project, CSUN and community college officials are working closely together to ensure the transfer students have what they need to complete their educational goals.

Abourezk pointed out that many of the students are first-generation college students struggling to juggle work and home obligations, along with their studies.

“It’s already hard enough, but if you’re a first-generation student and you think you have to do this all on your own, it can be intimidating,” she said.

“One of the huge benefits to this project is the connection the students will have to this campus and the community college they came from,” she continued. “The students will know that they will have someone, at either campus, who is there to help them achieve their educational goals.”

Adams and Abourezk said they hope to eventually expand the project to include all transfer students, not just those who are struggling or have dropped out of CSUN.

“Eventually, what we want to do is take students who have transferred here from the community colleges and are taking classes, and transfer some of the credit back to give them that associate’s degree,” Adams said. “It’s incredibly empowering to know that you’ve completed one degree. Completing a bachelor’s and even graduate degrees will seem possible after that.”