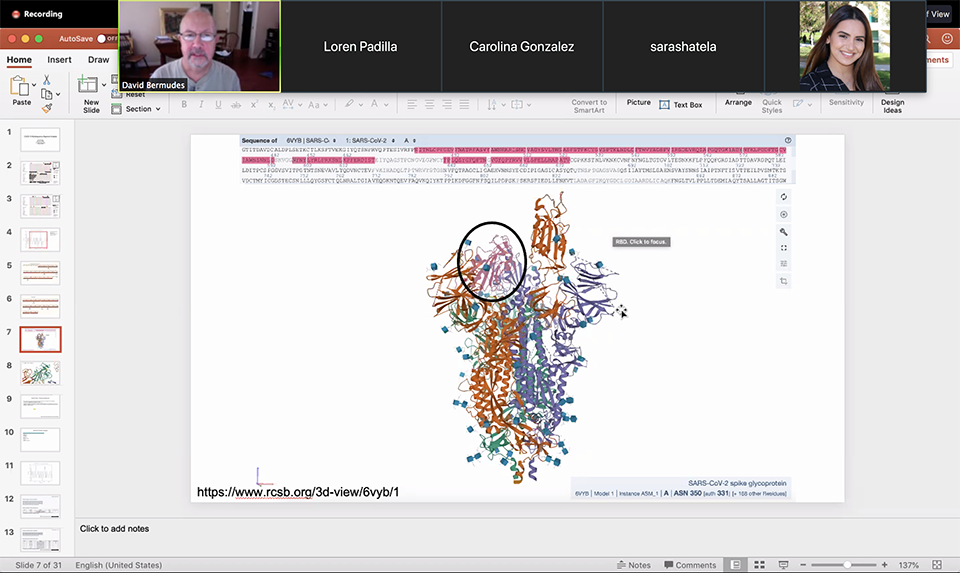 CSUN biology student Sara Shatela used her mouse cursor to zoom in on her work, a 3-D map of a protein in SARS-CoV-2, the virus that has infected more than 4 million people around the world with COVID-19, and counting.

The map took the rough shape of a human heart, filled with a constellation of colored swirls representing the amino acids of the protein  — which can latch on to human cells, an invisible moment that can lead to infection and sometimes, a tragic death.

As Shatela shared her screen over Zoom on May 5, her Biology 447 classmates and professor David Bermudes used their combined research from the past several weeks to try to answer a life-or-death question critical to nearly every human on Earth: Which spot on that protein would be most vulnerable to immune system attack, induced by a vaccine?

The spot they examined was promising: a group of amino acids known for its potential to be neutralized by antibodies in other viruses such as influenza. Maybe this was it, Bermudes said — the right spot to target with a vaccine that could help annihilate the virus that has killed nearly 300,000 people, crippled economies and shut down normal life in much of the world.

There are dozens of SARS-CoV-2 vaccine projects in development around the world, and several in the trials stage. But only a small percentage of vaccines in clinical trials ever make it to the market, and the virus continues to mutate, potentially outpacing the vaccines that are already underway. The end to the story is far from written, but the CSUN biology students feel like they’re right in the thick of things.

“I don’t think we’ve verbalized it, but I’m sure we’re all thinking it: ‘How cool would it be if we were the ones?’” said Alina Simonyan, a junior cell and molecular biology major in Bermudes’ class. “We have a shot at something that is viable.” 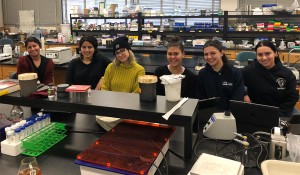 In the next few weeks, Bermudes said, he hopes to publish their research in an open-source publication, where researchers have been hurriedly sharing non-peer-reviewed work to speed the development of a vaccine. He’s hoping to publish his non-peer-reviewed findings as soon as possible, with the students as co-authors, possibly in the next couple of weeks. Once the findings are out in the world, he said, the group hopes their research could attract a biotech company or even a country’s government to fund the expensive trials necessary to get a vaccine to market.

“We’re so close to actually being able to do it in the lab,” Bermudes said. “Sara mapped the peaks of the protein. She’s really finishing the argument that we’re looking at the right parts.”

For the first couple of months of the spring semester, students were studying stress responses in salmonella. But then the pandemic hit, Californians were ordered to shelter in place, and every university — including CSUN — shuttered its labs and moved classes online. During one of the early online classes in March, while sharing his desktop via Zoom, Bermudes accidentally left a COVID-related PowerPoint slide visible.

Bermudes works with bacteria that can be engineered to fight cancer. He also has experience developing vaccines. He has worked to engineer salmonella into a non-toxic vaccine-delivery agent, and two of his therapies made it to clinical trials.

When COVID-19 appeared, he realized his vaccine work might be helpful: salmonella-based vaccines can be made quickly and in bulk. They’re effective, and they can be taken orally, which is safer and easier than injections. There are currently dozens of coronavirus vaccine projects in development, but Bermudes isn’t aware of any others that are salmonella-based. Over spring break, he had put together some thoughts on making a salmonella-based vaccine, which were included on that PowerPoint file.

The students noticed the file, and they had questions.

‘I Want to Do Something’

Bermudes showed them the structure of the virus, and the similarities to other viruses such as influenza, and he discussed why a specific protein, known as the “spike protein,” could be the obvious target for a vaccine. He also explained why his salmonella-based vaccine idea could work. Soon, the students had put aside their previous work and immersed themselves in investigating this idea.

The vaccine project has energized the students, thrusting them into the fight against an immediate threat with life-and-death stakes for billions of people across the planet. They’re getting hands-on experience tackling an issue that has touched everyone they know, that dominates nearly every facet of life. 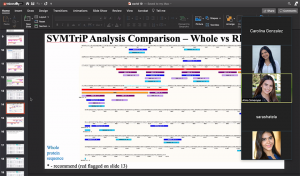 A screenshot of Alina Simonyan’s presentation in David Bermudes’ class and lab.

“Whenever I turn on the news, it’s all this tragic stuff going on — people dying all over the world, workers getting sick and losing their jobs, families suffering. I feel so helpless and I want to do something,” said Shatela, a senior cell and molecular biology major. “Working on this project makes me feel like I can actually make a difference. I’m learning a lot.”

John Pawelek, a senior research scientist at Yale University, who has previously worked with Bermudes but is not involved with this project, agreed that Bermudes’ class could possibly make valuable discoveries in the fight against COVID-19.

“All the researchers in the world are working on it right now,” Pawelek said. “It couldn’t be more important. Somebody’s got to find something; I think somebody will. Maybe it will be David Bermudes. It seems like a really smart idea.”

Introducing antigens in vaccine form is a safe way for the body to develop antibodies — the blood proteins the immune system uses to attack hostile invaders — which can be used later to shut down the virus if the vaccinated person is exposed.

Researchers worldwide are targeting the spike protein, which helps this coronavirus attach to a person’s cells. Vaccines can train the human immune system to block the spike protein from attaching and infecting human cells. Antibodies also help other cells of the immune system known as phagocytes to engulf the virus. 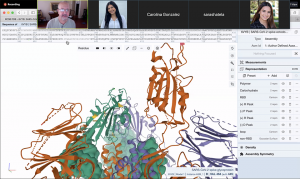 A screenshot of Sara Shatel’s map of the SARS-CoV-2 spike protein.

Bermudes and his students have been examining the spike protein’s antigens, looking for those that are predicted to trigger an effective antibody response. They’re inputting various scenarios into computer-based models, based on their findings and their hunches, letting the models predict which approach would be most likely to succeed.

“The best part about this class was coming together as a group [online], so all of our information was a little jigsaw,” said senior biochemistry major Amy Terzian. “So, we’re able to discover things that no one has really thought of, or considered. … We were just putting in the pieces and understanding that it’s all a cumulative effect, so that we can get a strong product out of something very complex to understand.”

For senior microbiology major Carolina Gonzalez, the experience has opened her eyes to all the tools that are available outside the lab. She learned that online research, literature and apps can be effective in real-time problem solving, she said.

“With this class, we have learned how to do the research online and use those tools and to apply them into our experiments,” Gonzalez said. “Even though we can’t be in class, we can learn new things, and we can apply them and solve big problems. Even though [the pandemic] is a bad experience, out of all of my classes, this is the one I’m taking more from, because I have learned so many things.”

Because this strain of coronavirus was novel — it’s related to SARS-CoV and other coronavirus, but unknown to scientists before late 2019 — researchers are learning new things every day. Given the urgency of the effort, researchers are collaborating, publishing their latest findings to open-access websites such as bioRxiv and giving each other clues to help in the fight. The CSUN students are staying up-to-date on the latest findings. 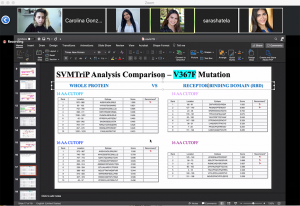 Senior biology major Sasha Machulsky noticed in her Snapchat news feed that a team of researchers had published an interactive web site on the eight major strains of SARS-CoV-2. She used their website to study the spike protein and noticed one mutation was occurring more frequently than others – this turned out to be a newer, more contagious mutation of the virus several days before it became widely publicized in America this week. (Other researchers have expressed skepticism of this finding.)

“I felt much more involved and like I contributed to the project, because it’s such a new thing, that every single generation has something they can contribute,” Machulsky said.

Senior cell and molecular biology major Mary Antikyan said that switching to focus on the COVID project taught her about the importance of adaptability in science and research.

“It’s here and it’s happening now,” Antikyan said. “Things are changing and evolving on a daily basis. It’s a never-ending adaptability that you need to have. Otherwise, you won’t really get anywhere.”

Bermudes believes the students’ research will help him engineer a salmonella-based vaccine that produces the same antigen as in the spike protein, which can be done in his CSUN lab. It’s a process similar to the way E. coli bacteria can be made to produce insulin.

The students’ classwork on the vaccine project ended this week with the end of the spring semester, though they did say in class that after final exams next week, Bermudes could pick their brains or borrow their technical expertise on some of the software they’ve been using.

It’s possible that at least one of the students could receive a grant to work to make the project ready to submit to a peer-reviewed journal. Simonyan already has identified at least one promising grant possibility.

Bermudes and his students have nearly reached the end of what’s feasible in computer models, anyway, he noted. Bermudes said that if he can prove in a lab that he can manipulate salmonella to make the correct antigenic protein, then he will test the protein after final exams by exposing it to antibodies known to attack human SARS-CoV-2.

From there, Bermudes said, he hopes to publish the class’s research on bioRxiv, and see if anyone with the resources will take the vaccine to trial. There are multiple stages during the trial phase, some of which can cost millions of dollars.

Bermudes knows his envisioned scenario is possible. He’s already done it before.

Several years ago while conducting postdoctoral work at the Yale Medical School, he developed a salmonella injection as an anti-tumor therapy, and eventually, several major hospitals and institutes tested it in humans.

“It was a project everyone thought was crazy, and we got a small startup company there to pick it up, and they took it all the way to clinical trials,” Bermudes said. “This kind of pathway could definitely lead to something that you could use in humans.”

It’s difficult to put a timeline on the complete development of this potential vaccine, Bermudes said. Advisors to President Trump initially put the timeline for a vaccine at 12 to 18 months.

No matter the outcome, the FIRE students have learned invaluable lessons about the real-world stakes of biomedical research.

“Our class allows us to explore ideas on the edge of science,” Terzian said. “It’s an empowering feeling to realize that the materials we are producing can be published to help society and can cause an impact.”