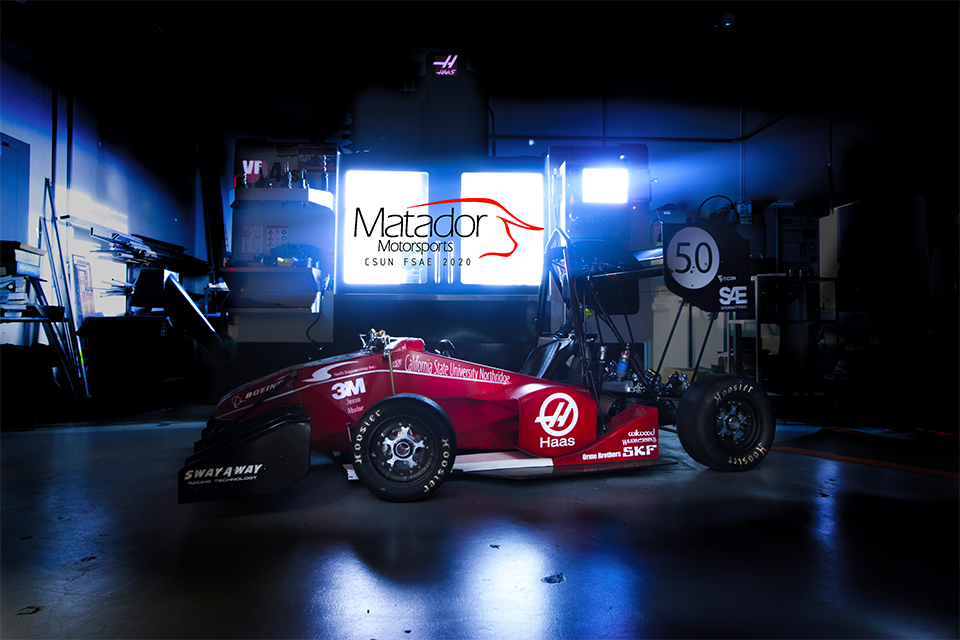 CSUN mechanical engineering senior Jacob Vorzimer and the dozens of members of the Formula SAE Internal Combustion Vehicle team worked as many as 60 hours a week this academic year to build and test a race car. Its look is very Matador — red and sleek — and its speed and reliability made it nearly fit to compete nationally.

However, the large group was unable to do final testing — to ensure it could withstand intense trials in competition — in a CSUN lab after the university shifted to online learning.

But CSUN, in its continued efforts to give students opportunities during the COVID-19 crisis, still provided Matadors like Vorzimer a virtual space to showcase their innovative projects.

CSUN’s annual College of Engineering and Computer Science’s Senior Design Project Showcase took on a new format on May 1, moving from its traditional in-person competition to a live online presentation event. 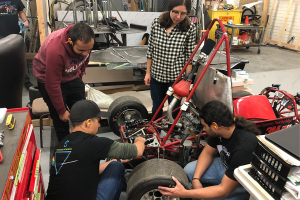 “[Presenting at the showcase] gave us a little bit of closure for the project because we got to show what we actually did,” Vorzimer said. “It also gave us the opportunity to show the college what we’ve been working on so hard in that lab for a year. And it felt really good.”

Vorzimer said he and his fellow senior students hope to keep the ball rolling, even beyond graduation, to continue manufacturing and testing their vehicle over the summer and have it ready in time for an online competition in June.

Many other student projects also had to delay completion due to the pandemic, but despite the challenges, they were able to present at the Senior Design Project Showcase. Thanks to generous donations from Autodesk president and CSUN alumnus Andrew Anagnost, Aerojet Rocketdyne and Northrop Grumman, and with collaboration from the College of Engineering and Computer Science, as well as CSUN alumni who participated in the event, the virtual stage was set for students to show their innovation.

Students wowed the virtual audience with 24 projects, which included a drone that can save lives, a robot that can paint walls, a canoe made out of concrete that can float, a computer system that can control a fleet of bots, and much more. Students presented their work in 15-minute oral presentations through Zoom, which enabled them to share their slideshow presentations and demos to the screens of each audience member. Because projects were viewed from afar on computer screens, there were no winners or placing, and thus the event was more true to its name — a showcase.

Anagnost, a Northern California resident who came to campus to judge in the 2018 and 2019 events, said it was important for him to participate in the 2020 event’s adjusted format.

Anagnost empathized with students who faced unexpected obstacles in producing and finalizing their projects. But he added that their spirit was true to all Matadors in their ability to overcome the obstacles.

“Everybody had to deal with unprecedented challenges and frankly unprecedented disappointments [because of the pandemic]. Nobody wants their final effort in their education to be disrupted by something like this,” Anagnost said. “[Students] figured out how to stay connected. They figured out how to be engaged. And they figured out how to have fun with it. … That’s really what’s great about a lot of the students, especially at CSUN, is they are resilient. They’re a tough crowd. Some of them have been through tough things. And they know, hey, this is a bump. OK, I’m going to deal with the bump. And how they deal with the bump is going to define a lot for how they deal with a lot of things moving forward in their career.”

Presenting was not mandatory, said Houssam Toutanji, dean of the College of Engineering and Computer Science, so it was initially planned to set up only one session for the virtual showcase. However, when more students expressed their enthusiasm to share their projects, he said, they expanded the program to accommodate more presentations. 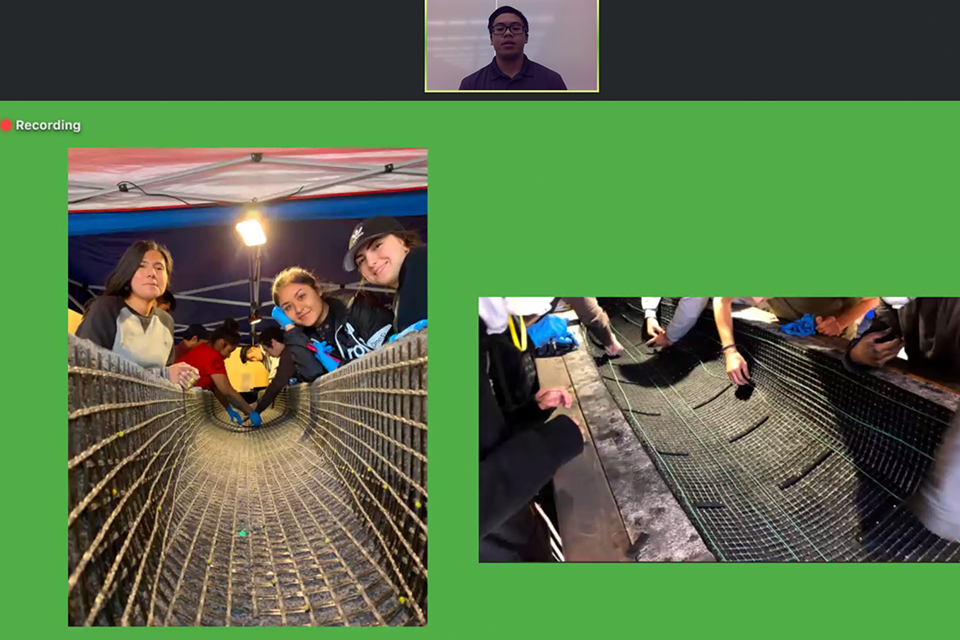 Concrete Canoe team leader Matthew Cristi presents his team’s work through Zoom during the virtual Senior Design Project Showcase on May 1. The photos were taken before social distancing measures were enacted.

Another team that was supposed to compete on the national level was the Concrete Canoe team. This academic year, they put hundreds of hours into constructing all 19 feet and 250 pounds of ‘Terra,’ the concrete canoe they planned to race against teams from other universities at the American Society of Civil Engineers’ Pacific Southwest Conference in April.

However, despite not being able to compete this year, the team still shared some triumphs. Before the stay-at-home order, team leader Matthew Cristi described how they were able to complete various stages, including securing the mold and pouring their concrete mix in it, on time. The team was also able to build the canoe — a process for which they initially budgeted around $980 — without spending a dollar, thanks to proactive communication with generous companies for materials and resourceful thinking from the group.

Along with the details of the projects themselves, many student teams shared how the process of working on them brought along friendships.

In their presentation, the team behind OFF-TOP, a mobile productivity app that monitors and analyzes speech in real-time to help presenters stay on topic when speaking, said they stayed up until dawn many times over the past eight months. In the process of building the app, they also built a connection.

All 24 student teams who volunteered to showcase their work did so with excellence, Toutanji said. Overall, the virtual event was a great success, he said, and the perseverance and determination of the students this year has raised the bar for next year’s showcase.

“I am so proud of our students and faculty who have been able to pivot in order to complete their projects, despite the challenges,” Toutanji said. “This is truly a testament of the quality of the students in our college, as well as our faculty and staff, who worked with limited resources but were able to bring this all the way to the finish line.”