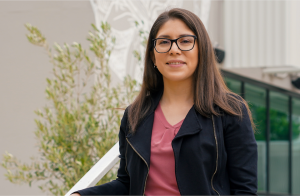 Erika Baron has been honored as this year’s CSU Trustees’ Award winner.

Despite a rocky start to her undergraduate studies, when she faced academic probation, CSUN graduate student Erika Baron refused to give up and continued working hard, finding success on her journey.

Baron pushed through her early academic struggles with the help and support of her mentors at CSUN, completing her bachelor’s degree in psychology in 2015. Now pursuing a Master of Social Work (MSW) degree at CSUN, Baron’s talent, determination and drive were honored this month when the California State University system named her the CSUN winner of the 2021 Trustees’ Award for Outstanding Achievement.

“I’m being acknowledged for all the hard work that I have accomplished, and it’s surreal. I just can’t believe the position that I’m in, and I’m very humbled by it,” Baron said.

As one of the 23 students honored with the award — one from each CSU campus — Baron’s effort has not gone unnoticed. The achievement is the highest recognition a student can receive in the CSU system, providing outstanding students who have demonstrated financial need with a donor-funded scholarship for their superior academic performance, personal accomplishments and community service.

During her undergraduate studies, Baron was determined to leave a positive impact on the community. Baron helped co-found Matadors for Equality, a club that provided a safe space for marginalized groups to meet and talk about their experiences at school.

Additionally, Baron volunteered for the CSUN Helpline program, where she answered calls and helped people in complicated situations and supported their transition to therapy. She also participated in the campus’ Joint Advocates on Disordered Eating (JADE), where she helped students address the issues surrounding eating disorders and promoted body positivity among the CSUN community.

As a Mexican American first-generation college student, Baron had her own struggles and trauma to overcome, including breaking down cultural gender norms and barriers and the desire to carve out her own identity, Baron said.

However, thanks to the help, support and mentorship of her professors and her best friend, Baron said, she completed her bachelor’s degree and took the next step into graduate school.

“I’m not here because I did it on my own. I’m here and I won this award because of the people I have surrounded myself with that really showed me the support and love that I needed,” Baron said.

Baron aims to complete her MSW and then become a licensed clinical psychologist and social worker, combining both areas to eventually work as a professor and counselor in the CSU system, she said. She hopes to provide the same kind of support and help she received from her mentors during her time as a student, Baron added.

“I strive to be someone who can listen, counsel, mentor and motivate others to improve their psychological well-being,” Baron said, in an interview about her award for the CSU website.