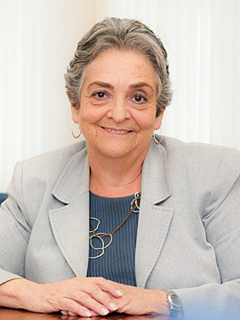 Newly appointed Vice Provost Cynthia Rawitch’s foray into academia was purely experimental. A hard-hitting reporter for the Associated Press, she accepted her first teaching assignment at Cal State Northridge in 1973 with the idea it would be a one-time thing.

Her love affair with students and the academic community at CSUN expanded to include more than 30 years of teaching, as well as time spent as journalism department chair and associate dean followed by acting administrator-in-charge of the College of Arts, Media and Communication, associate vice president of undergraduate studies and as of April, vice provost of the university.

In her role as vice provost, Rawitch works closely with Provost and Vice President for Academic Affairs Harry Hellenbrand.

“CSUN is becoming a bigger, more complex institution with an increasing number of issues, concerns and activities that need to be addressed,” she said. “Having a vice provost adds a layer of support and allows some of the daily operations to not end up in Harry’s lap.”

As vice provost, Rawitch describes herself as the “implementer,” working alongside Provost Hellenbrand, whom she sees as the “big picture guy.”

“He has these wonderful ideas and I like the nitty-gritty of making them work,” Rawitch said. “He draws the picture and I help to put the puzzle pieces together.  I like figuring out ways to make other people’s ideas happen.”

A typical day might find her working on programs to help academically underprepared freshmen catch up, developing ways to ensure that the nearly 100 newly hired faculty members have a great experience during their first year at CSUN, or tending to administrative issues involving space, budget or planning.

Her new position keeps her schedule as full as her in-box.

“The number of emails I get each day …” said Rawitch, her eyes widening to suggest an overwhelming quantity. “And the number of things going on that I didn’t know were part of my job … but if I’m the provost’s chief assistant, anything could be part of my job.”

True to her early roots as a reporter, she refuses to let the need for multi-tasking, time management and the more-than-occasional need to learn-by-doing get the better of her.

“I’m still getting the feel for the pattern of the day,” she said.  “I assume that will fall into place.  I like variety and I like being busy, so it’s a great job for me.”