CSUN and a team of community partners are turning unused corners of the city into safe havens for bees, hummingbirds and other pollinators that are critical to growing the planet’s food supply.

These areas, dubbed “pollinator pockets,” will include plants and beehives to attract pollinators and will be built in unused and vacant lots. These locations throughout the city will help support the populations of pollinators — animals or insects, including hummingbirds and honey bees, that travel from one plant to another and transfer the pollen that helps plants reproduce.

Approximately 35 percent of crops rely on pollinators to reproduce, including those that humans rely on for food — such as blueberries, squash, peaches and pomegranates — but the populations of these pollinators have plunged in recent years due to pollution and loss of habitat.

With planting slated for later this spring or in fall, the pockets will help give the pollinators a fighting chance by giving them a safe space to make a home. 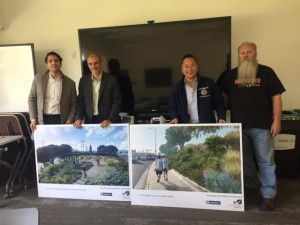 “We’re really excited about this opportunity to expand Northridge and CSUN’s reach out into the community,” said Rafael De La Rosa, assistant vice president for government and community relations at CSUN. “I’ve always said that the ‘C’ in CSUN is for community, so this is another way that we can expand our reach outside of our borders, because we really are part of the city.”

Larson, president and CEO of the Northridge Beautification Foundation, first teamed up with Lee, then a staff member for L.A. City Councilman Mitch Englander, in 2015 to discuss building these pockets. With Lee’s support, Larson and Zappia won city council approval to begin building and cultivating the pollinator pockets. Larson has begun to use these locations to keep bees, but the plan is to develop the spaces into gardens for all pollinators.

“We’re all kind of working under the same language at this point, which is adopting the language of sustainability,” Larson said.

The organizers have proposed several locations for these pockets near campus and the surrounding neighborhoods, including an unpaved alley along Reseda Boulevard. Larson hopes to expand this project further and create even more pockets in the future, he said.

Once the pockets are planted and built, Zappia said, he hopes they will provide extra learning opportunities for CSUN students from several different colleges — including science, social services, humanities, urban studies and history majors — giving them a chance to explore the community and learn more about the city’s rich history in a hands-on way. The organizers also hope to involve local schoolchildren in the project, to teach them the importance of pollinators and about the dwindling bee population.

This is CSUN’s latest in an ongoing effort to support pollinators. In 2018, CSUN’s sustainability efforts earned the campus an official certification as a “Bee Campus USA Affiliate.” The certification is awarded to campuses around the country that show a dedicated effort to the protection of bees and other pollinators.

CSUN has had a long history of bee-friendly activities, and faculty, staff and students plan to do much more. Rachel Mackelprang, associate professor of biology, is a beekeeper on campus who has done intense research on the gut bacteria of bees. She also leads a team of students that harvests honey and sells it to CSUN students, faculty, staff and members of the community. The “Bee a Matador” honey can be ordered through the Marilyn Magaram Center for Food Science, Nutrition and Dietetics.

CSUN has committed to minimizing its use of pesticides that are harmful to bee populations, and the university joined 57 other U.S. campuses in improving college landscapes for pollinators. Bee Campus USA is an initiative of the Xerces Society for Invertebrate Conservation, a nonprofit organization based in Portland, Ore., with offices across the country.