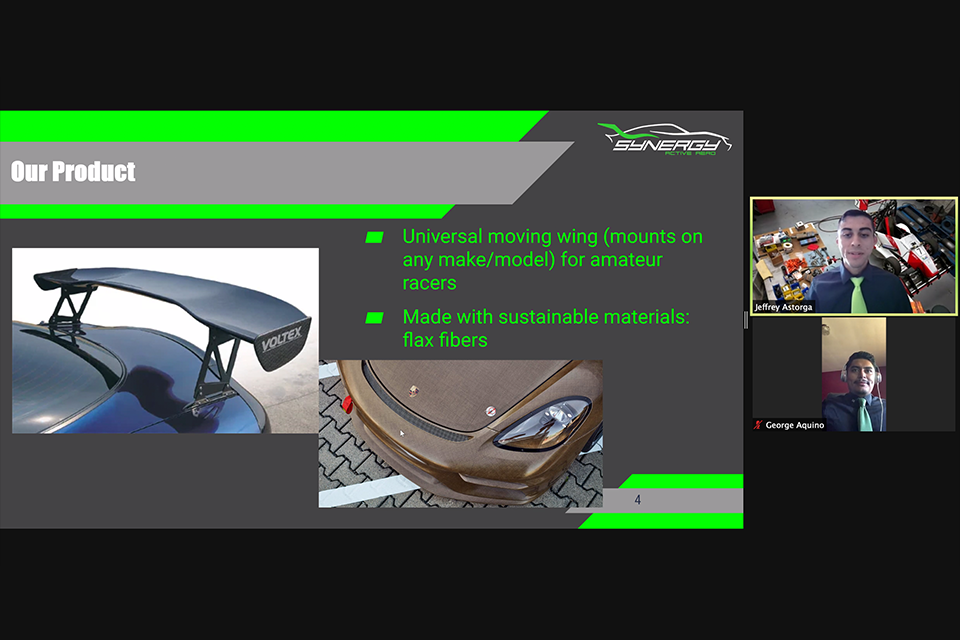 In blockbuster films like “The Fast and the Furious” and “Need for Speed,” audiences witness supercars, driven by expert drivers, reach breakneck speeds. But what if amateur drivers could get a taste of that supercar action with their own cars?

Car wings, which resemble spoilers, are used to increase performance by fighting wind forces that lift tires from the pavement. Car wings create downforce that improves traction and helps the vehicle stay fast even during turns, resulting in faster race times.

Most wings are custom-designed for individual cars. Astorga said Synergy designed an adaptable, unique wing that senses its current driving conditions and optimizes itself for best performance, making it versatile enough to use on numerous types of cars.

“Every average Joe can mount this wing on whatever make or model vehicle they have, and go to the track on the weekend with the same level of performance as a professional driver that has a million-dollar team backing them,” Astorga said.

The 6th Annual CSUN Bull Ring, held virtually via Zoom for a second year, welcomed innovative products and startup company ideas from Matadors across campus. Hosted by the David Nazarian College of Business and Economics, the competition was open to all current CSUN student-owned and -run ventures, regardless of the students’ majors. The finals offered a total of $10,000 in prize money for the victors, including an Audience Choice Award winner determined by a live audience vote.

CSUN Nazarian College Dean Chandra Subramaniam noted that along with students from his own college, competitors this year included students from several CSUN colleges — the College of Engineering and Computer Science, the College of Science and Mathematics, and the Mike Curb College of Arts, Media, and Communication in the finals.

“It’s definitely a proud moment to see students from across the campus take up the mantle of entrepreneurship,” Subramaniam said. “I continue to be impressed by the level of creativity and collaboration of students with different disciplines to establish these business ventures.”

“Our students have been putting a lot of work into their new venture ideas, and the competition has been incredibly tough,” said CSUN Entrepreneurship Program Director Ryan Holbrook. “Just reaching this point in the competition is a huge accomplishment to be celebrated.”

Each team delivered a five- to seven-minute pitch, followed by a Q&A with the  judges, who asked students more about aspects of their business such as costs, customer acquisition strategies, profit models and more. On the panel of judges were Gail Becker, founder and CEO of healthy food company CAULIPOWER; Rick Friedman, founder and CEO of boutique law firm NovusGC; Jang Lee ’97 (Accounting Theory and Practice), partner at finance consulting firm Upround Partners; and Lydia Shayne, founder of Los Angeles-based bakery DeLuscious Cookies & Milk. 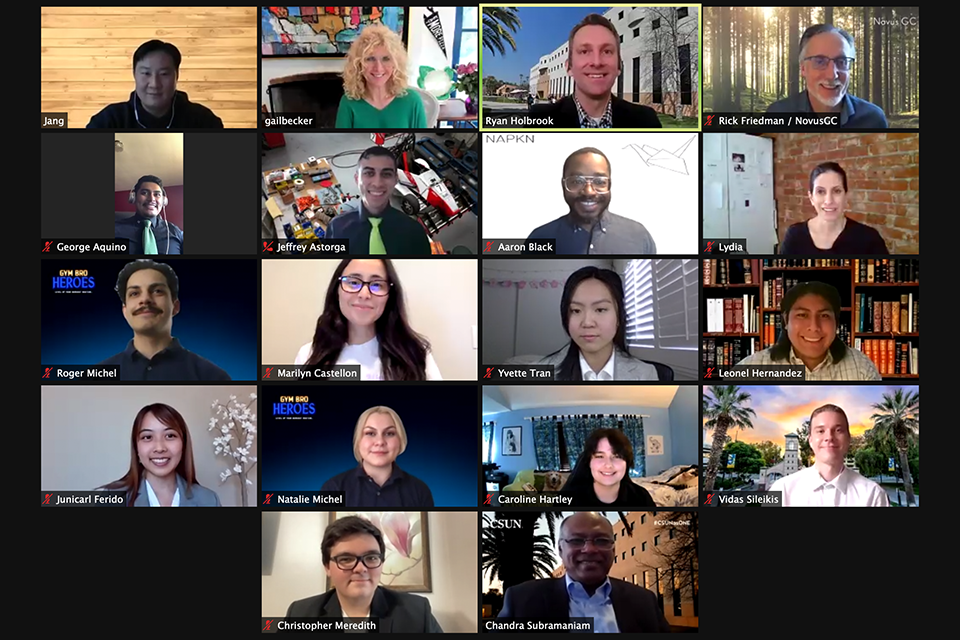 Astorga explained the physics of the Synergy Active Aero like this: When a car moves, air moves from front to back of the vehicle like water moves down stream. Every vehicle has a different shape, therefore the angle and behavior of the air as it reaches the rear of the car is slightly different for every car. These differences in airflow traditionally require a model-specific rear wing design which is designed to interface well with the type of airflow that will come from the front of the car.

However, Synergy Active Aero’s wing senses the airflow it’s receiving and adjusts its shape accordingly, meaning it can be mounted on multiple cars but still deliver the same performance, Astorga said.

Astorga said he and Aquino applied what they learned in CSUN’s mechanical engineering program as they designed their invention. He noted their experience in CSUN’s Formula SAE racing team, in which Aquino tried his hand at similar technology.

The Synergy duo said their product is currently in the design phase. And with the help of their $5,000 Bull Ring grand prize, they hope to establish design patents, manufacture and distribute inventory, market and promote their product, continue building their company, and spread their unique idea globally.

After all the finalists’ pitches, the CSUN Bull Ring opened the floor to special guests, Granada Hills Charter High School students and fall enrollees Junicarl Ferido and Yvette Tran, who pitched their own venture, Project Envo, a nonprofit dedicated to educating the community on climate change.

“While there’s no replacing the magic of in-person events, there were definitely elements of the virtual format that worked really well,” Holbrook said. “The mentoring, workshops and office hours all translated well virtually, as did the energy of the student pitches and judge Q&A. Overall, we were very happy with the event and particularly excited for the teams to continue moving their new ventures forward.”