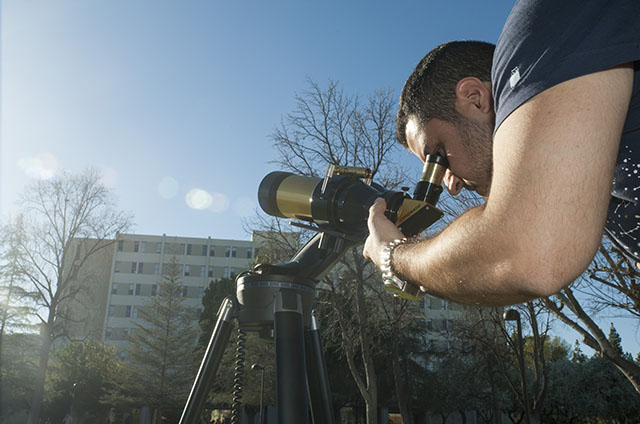 Forces invisible to the naked eye react near the apparent surface of the sun and shoot energy and charged particles of helium, carbon, oxygen and other ions into the outer regions of space. At times, these bursts, called solar flares, reach far enough to collide with Earth and damage anything in their path. California State University, Northridge solar astronomer Damian J. Christian is part of an international collaboration of solar scientists who are exploring these seemingly invisible forces within the sun to better predict when damaging solar flares will occur.

“The sun is one of the biggest influences on our life,” Christian said. “When there is a big solar storm, [it] could be really damaging. We are trying to understand the energy flow of the sun.”

Christian, who helped create the ROSA system in 2007 — located at the National Solar Observatory in Sunspot, NM and installed on the Dunn Solar Telescope — said it provides indispensable information to understand the physics of solar flares.

“It is interesting since all of space is so big, but the sun is very close to us and we don’t know enough about it,” he said. “There are all of these questions that haven’t been answered yet.”

Christian said that since CSUN is one of about a dozen institutions in the United States studying the sun, it provides our CSUN students with an excellent opportunity to get into the field as professionals.

“There are only so many institutions that do solar research,” he said. “There aren’t a lot of places training the next generation of solar observers. It’s the major astrophysics program here.”

The San Fernando Observatory, which was donated to CSUN by the Aerospace Corporation in the 1960s, will celebrate the opening of its new home at CSUN’s main campus on March 15.