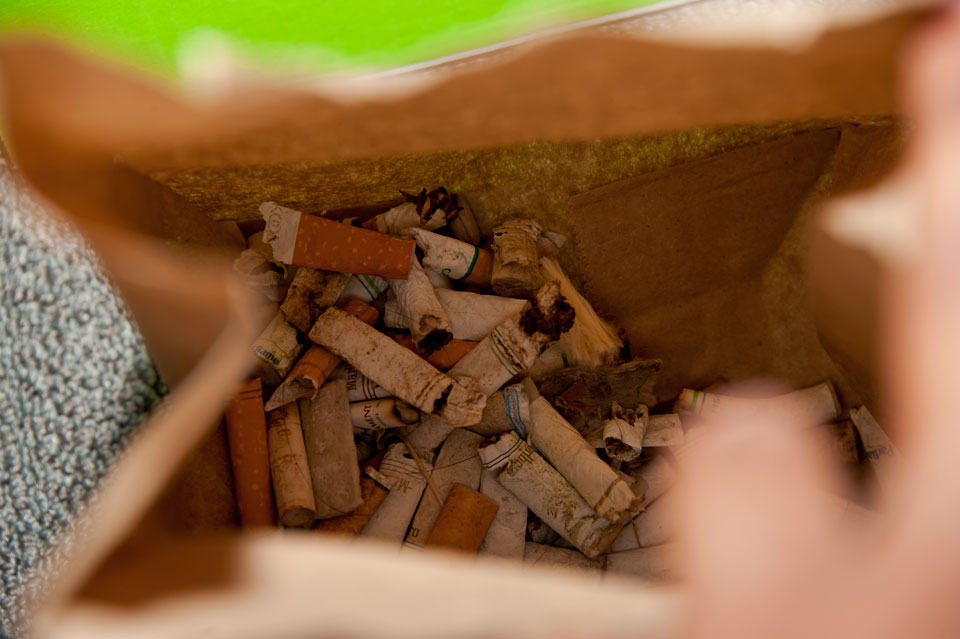 To help launch campus awareness of CSUN's new smoke- and tobacco-free campus policy, this week dozens of volunteers collected cigarette butts and other tobacco waste on campus, collecting more than 18,000 butts and removing them from campus grounds. Photo by David Hawkins.

California State University, Northridge is clearing the air. CSUN will become a smoke- and tobacco-free campus with the start of the fall semester this August.

By launching its “Clear the Air” initiative, CSUN is providing students, faculty, staff and visitors a healthier, smoke-free community in which to learn, live and work. A smoke- and tobacco-free campus promotes a clean and healthy environment and encourages non-smoking and tobacco-free lifestyles, CSUN officials said.

State law already prohibits smoking in workplaces and all buildings accessible to the general public throughout the state. In fall 2013, through the university’s Help Make CSUN Shine Brighter program, the campus was asked if CSUN should become smoke free, and more than three quarters of the respondents strongly supported this change. President Dianne F. Harrison convened a task force in 2013-14 to explore the idea and recommend a direction for CSUN. In August 2014, she announced the goal of implementing the policy, beginning Fall 2015.

“The smoke- and tobacco-free policy at CSUN offers our students, faculty and staff an opportunity to assess their personal lifestyle choices and take advantage of the many resources available that can promote a healthier environment for all Matadors,” Harrison said. “I recognize that this change may be difficult for some, but we listened and are responding to the strong feedback from our campus community to clear the air — creating a cleaner, healthier and more environmentally friendly CSUN.”

CSUN officials have communicated the change with union partners and student leadership and continue to discuss the impacts of the policy. The new policy, which goes into effect Aug. 19, will prohibit the use of tobacco products on the campus. The smoke-free environment not only encompasses the core of the campus, but also includes parking lots, on-campus residences and leased spaces, and spaces within buildings shared with other agencies. Smoking and the use of tobacco products will not be allowed in university-owned vehicles.

The smoke- and tobacco-free policy prohibits the use of cigarettes, cigars, pipes (including hookahs), electronic smoke devices such as e-cigarettes, tobacco products and nicotine delivery systems, including but not limited to chewing tobacco, snuff and SNUS. The only exceptions to the ban are any cessation products specifically approved by the U.S. Food and Drug Administration for use in treating n

The new policy applies to everyone who comes to CSUN’s campus, including students, visitors, faculty, staff, volunteers, alumni, vendors, contractors and service representatives.

“Smoking causes almost 500,000 deaths in the United States each year,” said Dr. Linda Reid-Chassiakos, director of CSUN’s Klotz Student Health Center. “The devastating health effects of smoking and breathing secondhand smoke include higher rates of lung cancer, heart disease and stroke, and chronic obstructive pulmonary disease. Most smokers develop their addiction to nicotine as teens and young adults, resulting in changes in developing brains that can make quitting much harder down the road. We hope that a smoke-free environment will prevent the recruitment of new smokers.

“For folks who would like to ease or quit their dependence on nicotine and improve their health, the Klotz Student Health Center offers a full range of comprehensive smoking-cessation programs for students, and partners with CSUN’s Department of Human Resources to offer employees smoking-cessation educational programming and counseling,” she said.

A list of resources, as well as more information on the new policy, is available at www.csun.edu/clear-the-air.

Citing studies that show that levels of toxic air contaminants from secondhand smoke can actually be higher in designated smoking areas than in indoor settings, creating a hazardous environment to individuals standing in or around these areas, CSUN opted to avoid the risks of localized and wind-blown smoke and plan to implement a fully smoke-free campus instead. A smoke-free campus also avoids the litter and tobacco waste associated with designated smoking areas.

“Designated smoking areas can encourage tobacco use by creating a social environment that attracts daily and non-daily tobacco users,” Reid-Chassiakos said. “By increasing smokers’ visibility on campus, students are likely to believe that more people smoke than is actually the case. This misconception, as well as role modeling, may encourage students to adopt nicotine use. Research has shown that more than half of senior students who smoke started smoking during college — as early as their freshman year .”

To help launch campus awareness of the new policy, this week dozens of volunteers collected cigarette butts and other tobacco waste on campus, collecting more than 18,000 butts and removing them from campus grounds.