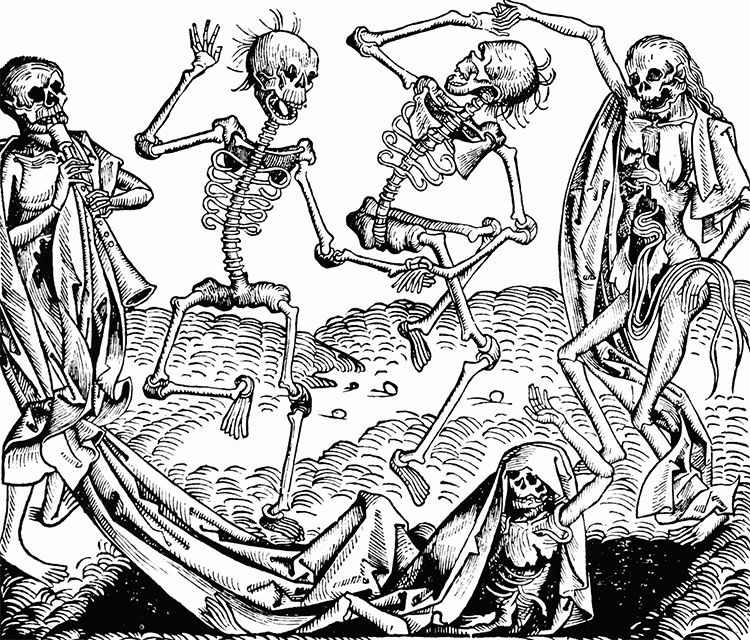 An illustration from the 14th century of how people saw the plague. Image courtesy of Clementine Oliver

Several centuries may have passed, but California State University, Northridge history professor Clementine Oliver has noticed several parallels between the current COVID-19 crisis and the bubonic plague of the 14th century, including culture shifts and changes in society that resulted from both pandemics.

Also known as the “Black Death” because one of its most common symptoms, blackened and swollen lymph nodes, the bubonic plague widely affected Europe and Asia. About 25 million people died due to it between 1346 and 1351.

Oliver noted similarities between the actual viruses — the plague had a pneumonic form that can be spread through coughing and breathing, like COVID-19 — as well as similarities in how society responded to the viruses.

“The way people react with conspiracy theories, with a bit of hysteria, with blame, with reckless partying — all of the complaints you see on social media now, I will find you a parallel in the 14th century,” she said.

Social distancing practices weren’t specifically put in place during the bubonic plague, but some countries, such as Italy and Scotland, encouraged quarantining, with the word “quarantine” coming from the Italian word for 40 days — “quarantino.”  While bacteria was not something of which people were aware in the 14th century, people understood the plague appeared to spread through the air, and they tried to take steps to counter it with aromatics and vinegar, the 14th century equivalent of medicine.

“They were trying to be as rational as possible, while the bodies [of those who had died from the plague] were everywhere,” Oliver said.

During the 14th century, Jewish people, who weren’t allowed to own property and worked primarily as merchants, were unfairly blamed for the spread of the bubonic plague — leading to increased anti-Semitism, which was always bubbling under the surface in Europe — similar to the backlash and racism Asians and Asian Americans have experienced, as some Americans have blamed China for the spread of COVID-19. And just as many people throughout the U.S. have ignored social distancing guidelines and mandates, many in the 14th century — especially those with wealth at their disposal or who believed that the bubonic plague was the end of the world — threw parties, Oliver said.

Even modern-day movements like Black Lives Matter have parallels to the 14th century, said Oliver. Prior to the bubonic plague and in the 20 years following it, people protested against the power and the influence of the Catholic Church and the feudal system, and the lower socioeconomic classes fought for better treatment, wages and working conditions.

“There’s something about pandemics that bring forth social unrest,” Oliver said.

Oliver knows she cannot predict the future — she can’t say for sure that there will be a rise in consumer economies or if there will be another Renaissance, similar to what followed the bubonic plague. But she did offer some words of comfort, as a historian. In spite of all the suffering that can happen during a traumatic event such as a pandemic, “history tells you that this too shall pass,” she said.

“The one thing historians can tell you is nothing is static,” Oliver said.