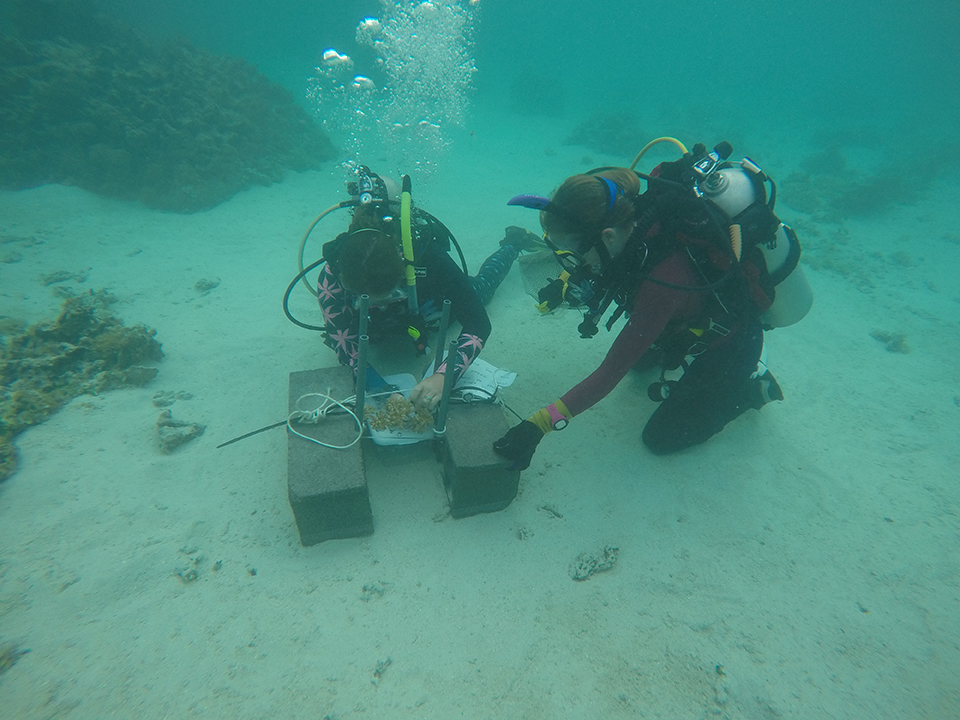 Danielle Becker on the left and CSUN marine biology professor Nyssa Silbiger on the right, collecting samples of Pocillopora acuta from one of the field sites in Mo’orea, French Polynesia. Photo by DM Barnas,

Land-based input — including nutrient and sediment loading — can have an adverse impact on a certain species of coral, making them more susceptible to the warmer seawater conditions brought on by climate change, according to a new study by California State University, Northridge marine biologists.

The study by Danielle Becker, who graduated from the university in August with a master’s degree in biology, and marine biology professor Nyssa Silbiger offers insight into how human-driven stressors can impact corals’ metabolic rates, including photosynthesis, respiration and calcification.

“Local and global anthropogenic, or human-caused, stressors are rapidly diminishing the biodiversity and structural complexity of coral reefs,” Becker said. “Therefore, a better understanding of the ecological ramifications of warming and land-based inputs — such as sedimentation and nutrient loading — on coral reef ecosystems is necessary.

“Our findings helped us identify how nutrient-input and sedimentation influenced coral physiology and their ability to function during thermal stress,” she continued. “With this information, we can better understand how different metabolic rates of corals may change under human-driven stressors. Further, these results indicate that anthropogenic stressors on a local scale may make it even more difficult for corals to deal with global stressors, like climate change.”

“Our study estimated a range of responses in a branching coral species to nutrient and sediment loading,” Silbiger said, “measuring metabolism of individuals in the lab to percent cover on the reef. While our current study shows that nutrient and sediment loading are generally detrimental to corals, other studies have conflicting results,” she continued. “The different biological responses across studies highlight the importance of how many interacting variables, like water flow, depth and distance to shore, can affect a coral’s response to nutrient loading.”

Becker, working with Silbiger, began her study in fall 2018, during the first year of her master’s program. She surveyed six sites in fringing coral reefs along the north shore of Mo’orea in French Polynesia that represented a gradient in nutrient and sediment concentrations. At each site, she measured the percent cover of numerous coral species, including Pocillopora acuta, a fast-growing branching coral that is typically more resistant to human disturbances. She also collected a variety of environmental samples, including the nutrient concentration in the water, tissue nitrogen content in macroalgae and sedimentation rates.

She then measured the photosynthesis, respiration, and calcification rates of the corals, at increasing temperatures, to better understand their ability to perform during thermal stress, and the impact nutrient and sediment loading had on their performance.

Becker, now a first-year doctoral student at the University of Rhode Island, explained that nutrient and sediment loading can occur either naturally — from such sources of fish excretion, nitrogen-fixing blue-green algae or submarine groundwater discharge — or by human-derived sources — such as industrial or agricultural waste and run-off, deforestation, stormwater run-off, coastal development or household products.

“These various sources enter the water supply through run-off and drainage that can eventually make their way into our waterways and into ocean environments, especially along coastal cities or populations around the world,” Becker said. “Land-based inputs — nutrients, sedimentation, toxins and pathogens — can enter coral reef ecosystems and cause disease and mortality, disrupt ecological functions, change dynamics and feeding behaviors, and prevent coral growth and reproduction.”

Becker and Silbiger found that coral metabolic responses significantly declined with exposure to high nutrient concentrations and sedimentation rates, which may have contributed to a decline in the Pocillopora acutacoral cover along the north shore fringing reefs in Mo’orea.

“To our knowledge, this is one of the first published studies that provides evidence for the influences of nutrient and sediment loading on coral thermal performance that encompasses multiple aspects of coral functionality,” Becker said. “Our findings show that nutrient and sediment loading can have a range of effects on coral functionality, with increased levels of these stressors compromising corals’ ability to withstand thermal stress and their ability to perform necessary metabolic tasks to thrive in their natural environments.

“Metabolic processes such as photosynthesis, respiration and calcification are important indicators of organismal health and are continuously being altered by organisms to adjust their physiological mechanisms in variable environments,” she continued. “Our study shows that these processes are compromised along a nutrient and sedimentation gradient which can have implications much larger than on an individual scale. Understanding how local-scale anthropogenic stressors influence the responses of corals to temperature can inform coral reef management.”

Becker and Silbiger said their findings are relevant to coral reefs around the world.

“Nutrient pollution is common anywhere that there is agriculture, coastal development and sewage outfalls,” Becker said. “French Polynesia has relatively low levels of anthropogenic nutrient and sediment loading compared to other areas of the world. If we’re seeing these detrimental effects on a lesser scale, it is worth investigating these relationships in other reefs around the world. Our findings also provide valuable information for the use of thermal performance curves to further understand how organisms across environments may respond to local- and global-scale anthropogenic stressors in concert.”