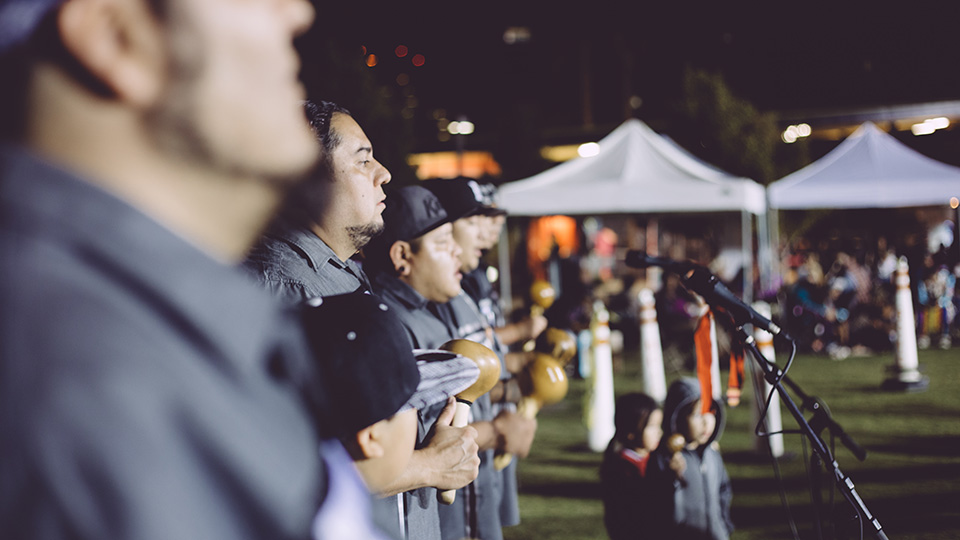 Before the freeways, the sushi restaurants, the car dealerships. Before the taco trucks, the movie studios, the swimming pools. Before the streets, the CSUN orange grove or the university’s campus. Long before the ranches and farms, the First Peoples lived in villages along the river and creeks of the vast valley and the foothills that surround it.

Today, San Fernando Valley cities and neighborhoods bear their names, some in their own language: Tujunga, San Fernando (Fernandeño — the Spanish name given to the natives brought to mission San Fernando), Cahuenga, Topanga. But these memorials are not for a lost people, a lost culture. The First Peoples were enslaved, persecuted, nearly wiped out, yes. But they’re not gone. Their descendants work, learn and grow here. Their name in this Valley is the Fernandeño Tataviam Band of Mission Indians, the historic tribe of northern Los Angeles County.

“We want to be acknowledged, that there were and are people here, and these are our traditional homelands,” said CSUN alum Mark J. Villaseñor ’16 (Global Supply Chain Management), vice president of the Tataviam Band, which numbers about 1,000 members today. “That’s the best thing you can do for people, to acknowledge that they exist. The biggest issue with cultural genocide is the erasure of history. The more you acknowledge the history, the more you are visible and the more you are seen.”

“Most of the time, we’re spoken about in the past [tense]: You know, ‘They were great, the Plains Indians,’ for example. Well, we’re not dead! We’re also not all Plains Indians. We’re still here, thriving,” Villaseñor said. Land acknowledgement promotes a conversation that tribes are still here striving to maintain their culture and beliefs, and develop economically in order to overcome the generations of trauma they have endured, he said.

Like countless regions across the United States and Canada, Los Angeles and the Valley are built on a dark history of oppression and genocide of Native Americans. It’s a painful truth that many leaders, educators and other residents only recently have begun to face, explore and teach with honesty. In fledgling efforts to reverse some of that cultural “erasure” in the 21st century, one of the very first steps is land acknowledgement.

This year, CSUN President Dianne F. Harrison, in consultation with tribal President Rudy Ortega Jr. and professor Scott Andrews (Cherokee Nation of Oklahoma), took a giant leap forward for the university in making this land acknowledgement public for the first time. In her annual Fall Welcome Address (this year broadcast virtually), Harrison opened her speech with what she called “a new tradition, a land acknowledgment that honors and respects the indigenous peoples of our region”:

“CSUN recognizes and acknowledges the Sesevitam, the first people of this ancestral and unceded territory of Sesevenga — which is now occupied by our institution,” Harrison said. “It honors their elders, past and present, and the Sesevitam descendants, who are citizens of the Fernandeño Tataviam Band of Mission Indians. We recognize that the Sesevitam are still here, and we are committed to lifting up their stories, culture and community.”

The land acknowledgement builds on CSUN’s long history of promoting a better understanding of American Indian history, cultures and tribal sovereignty. CSUN continues to be a place where Native Americans can share their cultures with the community through speakers and events sponsored by the American Indian Studies (AIS) program and the American Indian Student Assocation (AISA), including the annual pow wow, which CSUN has hosted since the 1970s.

“I was pleased to work with faculty, student and alumni leaders on this important acknowledgement of the first people of the San Fernando Valley,” Harrison said. “It is one of many initiatives that we are exploring to honor and recognize the Sesevitam and Fernandeño Tataviam Band of Mission Indians that also will serve to expand and deepen the educational opportunities for our students, in support of the current programming.”

A Relationship, ‘More than a Statement’

The public acknowledgement was years in the making, principally through the efforts and advocacy of Ortega Jr. — who met with Harrison on Zoom in the weeks before her Aug. 20 address — as well as years of partnership with CSUN faculty and students and the calm, steady advocacy of Andrews, head of CSUN’s AIS program in the College of Humanities. Villaseñor and his sister and fellow Matador, Pamela Villaseñor ’06 (Psychology), helped Ortega Jr. foster the partnership between CSUN and the tribe since their student days. They praised Andrews and others who have served as AIS director since 2000: Karren Baird-Olson (Wyandot, now retired) and Brian Burkhart (Cherokee Nation of Oklahoma, now at the University of Oklahoma). 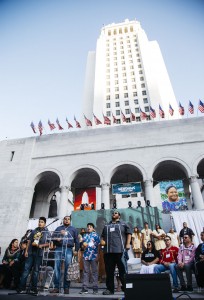 “I want to thank professor Scott Andrews for making the bridge between his studies and courses and the activities of our tribe,” said Ortega Jr., who has followed in his father’s footsteps as president of the tribe. The Ortega lineage traces its roots to many villages, including the village called Suitcanga, (the place of the oaks), from which Encino received its name. This ancestry precedes Mexican rule and is traced to an 1840s land grant from the Alta California governor to their ancestor, Francisco Papabubaba. “[Andrews’] advocacy has been crucial. He’s even jumped in as a volunteer. Scott has showed tremendous heart and dedication.

“Many of us look to CSUN as the higher education center and path for career building in our community,” Ortega Jr. said. “This relationship is more than a statement — the land acknowledgement is going to be bridging and strengthening the relationship overall. [The timing] may have been everything that has happened in the surrounding community in 2020. But it also could be the dedication of professor Andrews. It was all in the timing. And this is the time.”

Villaseñor said that few Angelenos know of the tribe or have awareness of the large Native American population in the Los Angeles area — which numbers 200,000, according to the 2010 Census count, the largest urban population of Native Americans in the U.S. As a small tribe without federal recognition or large economic resources like some of its neighboring tribes, the Tataviam face a particularly steep struggle.

“Most people don’t know that we exist, in a general sense, and that’s because the history isn’t really taught,” said Mark Villaseñor, who started participating in CSUN’s AISA in 2003, and later joined the club as a student. (After years in the workforce and motivated to help his tribe, he returned to CSUN in 2014 to complete a bachelor’s degree in the David Nazarian College of Business and Economics.) Along with AIS, the AISA club has been instrumental in community education, student empowerment and outreach, he said.

‘Before All This Was Here’

The North Valley was largely agricultural by the early 1950s, swathed in rows and rows of squash plants, and avocado and orange groves. With the post-World War II baby boom in full swing, L.A. exploded in population as families flocked to the Valley. Los Angeles State College (now Cal State L.A.) established a satellite campus in Northridge — and then in July 1958, the Valley campus officially separated and was renamed San Fernando Valley State College, what we know today as CSUN.

“Back before all this was here (in the pre-mission period), the San Fernando Valley was mostly a grassland,” Villaseñor said. “At Northridge, there was no village site, [because] there were no rivers running through it. The Los Angeles River ran through Encino, and a tributary would feed into it down through Sylmar and Tujunga.

“If you look at our map, all of the villages were around the foothills, because of the rivers, streams and, more importantly, where the oaks were,” he said. “Oaks were the primary source of sustenance in our diet, the acorns. That made up the staple of our diet.”

The closest neighboring village to what is now Northridge was Sesevenga (the place of the sycamore-woods) — near present-day Porter Ranch — inhabited by the Sesevitam. The independent family lineages that lived in Sesevenga and other villages in the foothill areas used Northridge and the midsection of the valley as a highway, Villaseñor said.

“The area of Northridge was like a highway for [the Native Americans],” he said. “If you were coming from the area of what’s now Porter Ranch and wanted to go to the village of Cahuenga, the modern site of Universal City, you’d use that trail. The interesting thing is that most of the highways and freeways in this area were built over old Indian trails. The I-5 and I-210 follow, almost exactly, the Indian trails.” 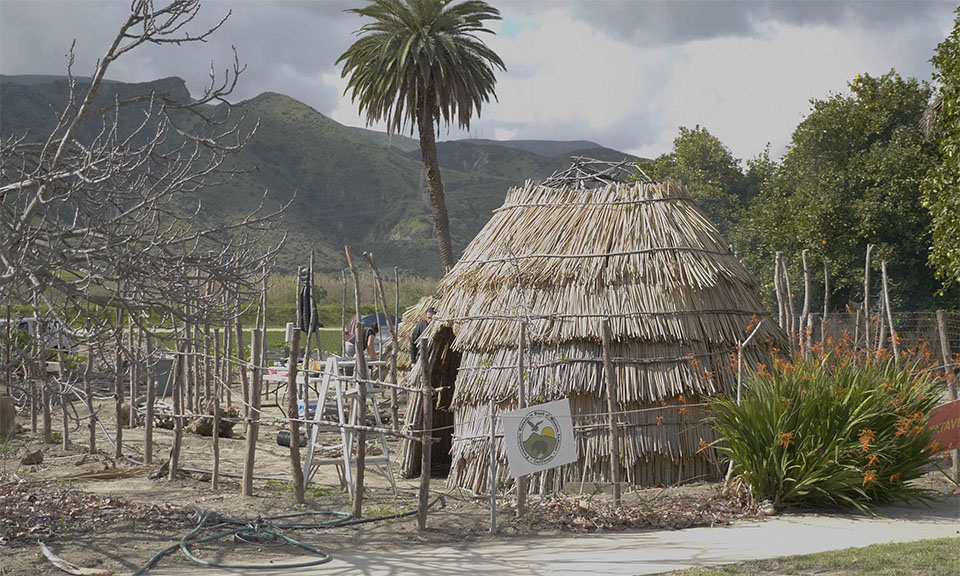 In the city of San Fernando, Rudy Ortega Sr. Park — named in memory of the former tribal president and longtime advocate — includes a simulated Tataviam tribe village. The park and site are open to the public to explore. Photo courtesy of the Fernandeño Tataviam Band of Mission Indians.

Opening the Door to Conversations — and Action

Their number of citizens may be small compared to larger neighboring, federally recognized bands such as Pechanga, but the Tataviam Band are committed to education and building community partnerships. In this, they are perfectly aligned with CSUN.

One of the ways Andrews helped pave the way for this year’s public land acknowledgement was by empowering student leaders and young alumni like Pamela Villaseñor to organize “teach-ins” at CSUN, starting in 2019, she said.

“The title of that first teach-in was ‘Whose Land Are You On?’” she said. “We showed a brief video about the tribe, and our tribal president was there. We had the students, primarily freshmen and sophomores, come up with ideas on how they could actualize some meaning behind those words of a land acknowledgement. How do we take action?

“[Now], President Harrison’s land acknowledgement is important for setting the stage for what comes next,” she continued. “As we see all of the civil unrest around the country and people finding their voices, it’s important that we think about what the next steps in our shared destiny will be. … This opens the door to conversations about native sovereignty, settler colonization and the continued impact on indigenous peoples.

“What does it mean to be inclusive, to say we want to uplift and support all communities? That’s where CSUN has really been a leader, not just an activist campus — but really a thought leader campus,” Pamela Villaseñor added. “Digging deep into critical issues and coming together as our diverse communities who are willing to think through these very complex issues, and come up with solid solutions for the future. I have confidence that the CSUN community will continue these efforts.”

Those next steps and future actions could include scholarships and other forms of reciprocity for Native American students; work with the Michael D. Eisner College of Education on proposed K-12 curriculum reform in the way California history is taught, especially about the missions; a mural in partnership with the CSUN Library, where part of the Tataviam archives are held; and indigenous plant zones on campus in partnership with CSUN Sustainability — among other proposals.

“Today we’re fighting off this vicious virus,” Ortega Jr. said. “My ancestors went through that as well [with smallpox and other diseases]. We are the last remaining fragments of those survivors. Not all of my ancestors weathered those times. We have to address the quality of life for people of color, to uplift the community overall. Our tribe really believes that. We find that we’re only as strong as those who need even more support from us. Our tribe is here — we’d like for people to get to know who we are, and support us in any fashion.”