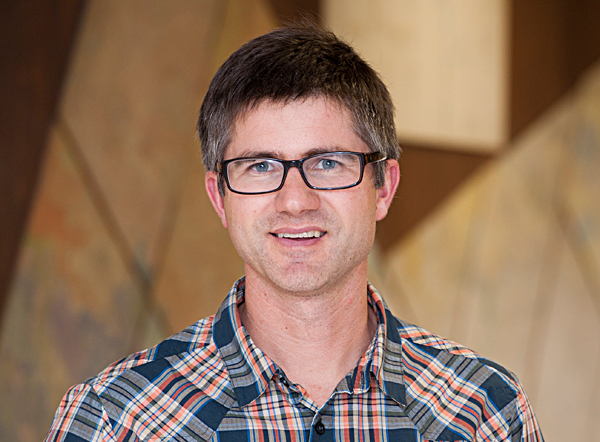 Geological sciences professor Richard V. Heermance has been named California State University, Northridge’s Jerome Richfield Memorial Scholar for his research on the glacial moraines in the Trinity Alps in the Klamath Mountains of Northern California.

The honor is named for the late Jerome Richfield, a dean emeritus and professor of philosophy at CSUN. Each year, an outstanding faculty member conducting research in the arts, science or humanities is awarded the honor so that the scholar may share his research with the campus community. The honorary scholar is granted three units of class time to continue in-depth research throughout the school year.

Heermance, who has been teaching at CSUN since spring 2009, worked with one graduate and two undergraduate students on the research. The research included field studies mapping glacial deposits and collecting samples for dating of the glacial moraines (rock piles deposited at the edge a glacier). The goal was to begin to reconstruct climate change patterns within the last 10,000 years. He credited Josh Graham, a graduate student in geological sciences, and undergraduate students Ryan Witkosky and Jose Cardona for much of the work on the project.

“The combination of the area’s poorly known glacial history, combined with the potential to resolve past climate changes in Northern California, caused me to be interested in this study,” Heermance said. “I have been thinking about this project for the past decade.”

Heermance will present his research at a lecture titled “Climactic Significance of Recent (<5,000 years ago) Glaciation in the Klamath Mountains of Northern California” at the annual Provost’s Colloquium on Wednesday, March 20, at 4 p.m. in the Presentation Room of the Delmar T. Oviatt Library. 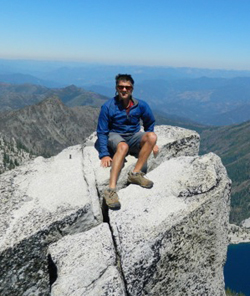 Geological sciences professor Richard V. Heermance at the top of Thompson Peak in the Trinity Alps.

The professor was attracted to the Trinity Alps because of their scientific appeal and his personal connection to the range. As a child, he visited the range for months at a time, spending entire summers in Northern California and camping in the mountains. As he completed his doctorate, he began to consider the potential research the region offered. Heermance said that dating of the Klamath Mountains glacial moraines (a proxy for when the glaciers were at their maximum extent) has yet to be accomplished, thereby making it a unique project with many implications about climate change.

“I am quite honored to be named the Jerome Richfield Memorial Scholar,” Heermance said. “I know that there are many excellent studies taking place at CSUN, and I am humbled to receive this award among so many esteemed colleagues within the university.”

Heermance, who specializes in stratigraphy and geomorphology, said CSUN has provided him with opportunities to set up a lab to date rocks using cosmogenic nuclide exposure dating and supported the purchase of laboratory processing equipment.

“CSUN has been great,” he said. “This award will allow me to devote more time throughout the year to publish the results of this research with my students.”