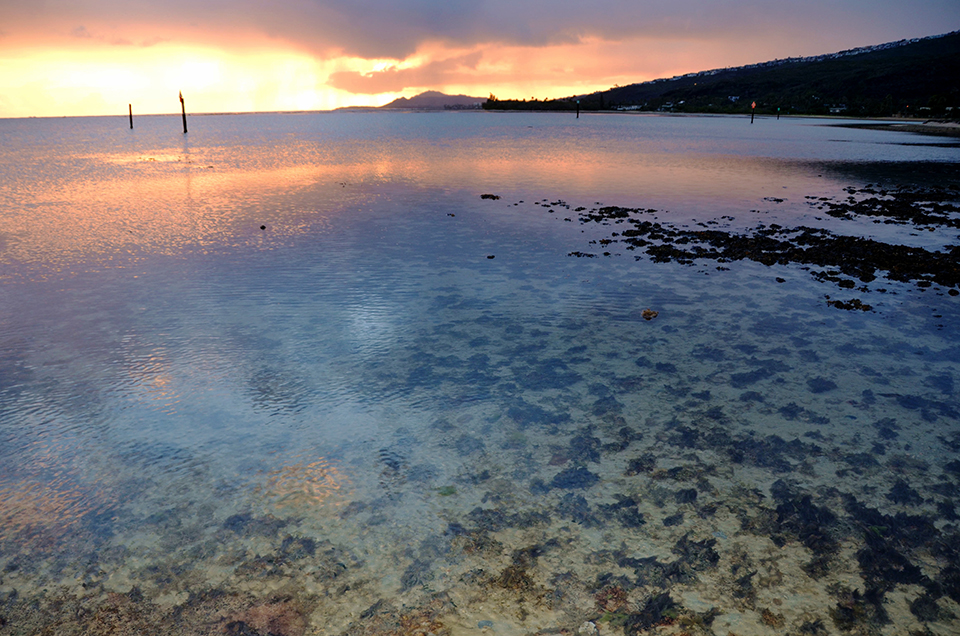 Maunalua Bay in Hawaii, where CSUN marine biologist Nyssa Silbiger and her colleagues found that submarine groundwater discharge is changing the metabolism of coral reefs ecosystems. Photo by Doug Harper.

Submarine groundwater discharge — the flow of fresh water from land through the coastal seafloor into the ocean — is changing the metabolism of coral reef ecosystems, according to California State University, Northridge marine biologist Nyssa Silbiger, which can affect coastal economies around the world.

The findings by Silbiger and her fellow researchers, Megan Donahue with the Hawaii Institute of Marine Biology and Katie Lubarsky with the Scripps Institution of Oceanography, have implications for understanding human impacts on marine ecosystems, as well as informing the decisions of policy makers as they consider coastal development or anticipate the impacts of sea-level rise.

“If we can understand how actions and decisions made miles away from the ocean affect marine ecosystems — in this case, coral reef ecosystems — then that effect can be taken into consideration when policy decisions are made,” Silbiger said.

“When we talk about impacts to marine ecosystems, we’re not only talking about the impact to sea life,” she said. “Our oceans contribute billions of dollars to the global economy.  Hawaii’s reefs alone contribute $33 billion to the U.S. economy. This affects all of us.”

The research by Silbiger and her colleagues, “Submarine groundwater discharge alters coral reef ecosystem metabolism,” was published last month in the Proceedings of the Royal Society B.

While the effect of groundwater was different at the two locations — given the topography, oceanography, and hydrology of each site — the scientists still found that the submarine groundwater discharge changed the metabolism of the reefs. Among the biggest drivers of the change are nutrients, which can be found in sewage and the fertilizers regularly used on our lawns, golf courses and in agricultural industries.

“Groundwater can act as a conduit for pollution,” Silbiger explained. “Take, for example, the sewage and agricultural runoff from fertilizers. These pollutants seep into the groundwater under our feet, and that groundwater is connected to our coastlines. While this study is about coral reefs, there are lots of different coastal ecosystems that experience groundwater discharge, even here in California.

“When groundwater enters the ocean, it brings high concentrations of nutrients,” she said. “That can increase the photosynthesis of algae and the respiration of microorganisms that live in the seawater. During photosynthesis, carbon dioxide is removed from the water and, during respiration, carbon dioxide is added. When nutrients from groundwater increase photosynthesis and respiration, carbon dioxide levels fluctuate and, with it, the acidity of the seawater. And then the acidity of seawater affects calcification — how fast corals and other calcifying organisms grow. So, groundwater has a cascading effect on the reef, ultimately changing the metabolism of the coral reefs as a whole. This happens in coastal ecosystems around the world.”

Silbiger likened coral reefs to a canary in a coal mine, their health offering us an indication of the health of the rest of the marine life in the ocean.

“Changes in ecosystem production and calcification can lead to decreased reef health, by affecting corals’ ability to build and maintain reef structures and/or compete with other organisms (such as macroalgae) for space,” Lubarsky said. “Therefore, changes in the biogeochemistry of submarine groundwater due to changes in land use, pollution or climate change have the potential to disrupt reef health and function, reducing the ability of reefs to provide important ecosystem services such as coastline protection.”

Silbiger noted that groundwater has naturally flowed into the oceans “since the beginning of their existence.”

“But what is not natural is that we are adding these pollutants to the groundwater,” Donahue said. “And the amount of groundwater is changing too, because of coastal development, rising sea level and climate-driven changes in rainfall. It’s everyone’s responsibility to be aware of what goes into our groundwater and to do what we can to try to keep our oceans safe.”