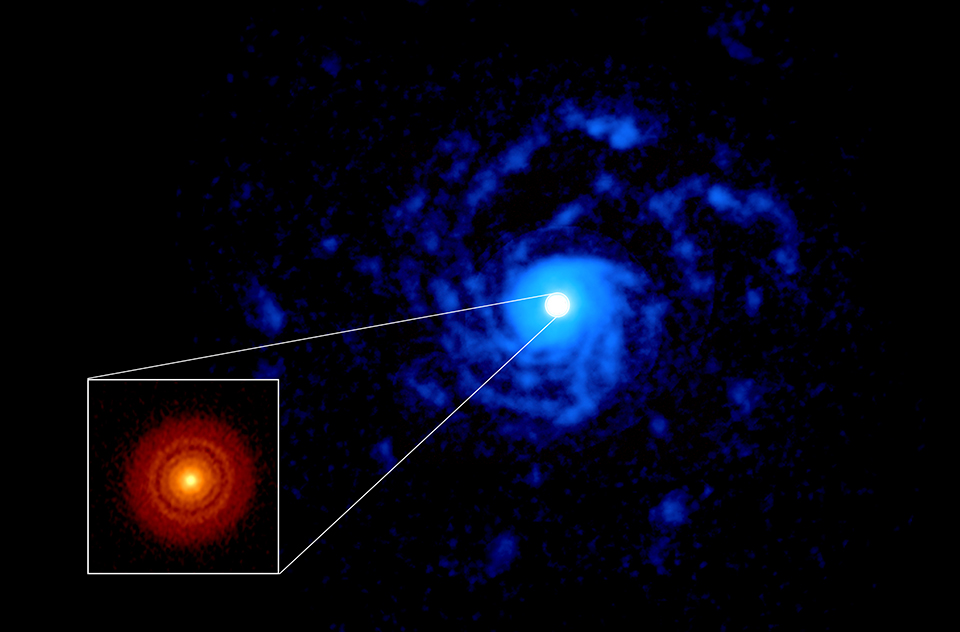 ALMA image of the planet-forming disk around the young star RU Lup. The inset image (lower left, red disk) shows a previous (DSHARP) observation of the dust disk with rings and gaps that hint at the presence of forming planets. The new observation shows a large spiral structure (in blue), made out of gas, that spans far beyond the compact dust disk. Credit: ALMA (ESO/NAOJ/NRAO), J. Huang and S. Andrews; NRAO/AUI/NSF, S. Dagnello

A new image of a young star captured by a team of researchers that includes California State University, Northridge astrophysicist Luca Ricci reveals that planet-forming environments are much more complex and chaotic than previously expected.

All planets, including those in our solar system, are born in disks of gas and dust around stars, so-called protoplanetary disks. Using the Atacama Large Millimeter/submillimeter Array (ALMA) telescope in Chile, Ricci and his colleagues were able to capture rare, high-resolution images of one planetary “factory.” The images show a compact dusty disk with multiple rings and gaps that hint at the presence of emerging planets. Even more surprising, the new images revealed very long and narrow gaseous spiral arms. 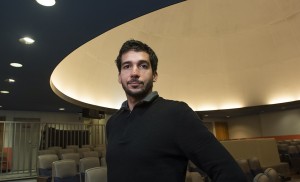 “This is the first time that we have ever seen an image like this,” Ricci said. “We were very, very surprised to see that a planet-forming disk can host those very long spiral arms of gas — kind of like the waving arms of an octopus, but on a single plane — growing away from the inner part of the disk.

“The reach of the spiral arms of gas is so long that if they were in our solar system, they would extend to 25 times the distance between the Sun and Pluto,” he said.

Ricci said the image of RU Lup, a young variable star in the Lupus constellation, taken by ALMA, indicates that protoplanetary disks are not as neatly arranged as initial observations of the emission from dust in them had suggested.

The image revealed a set of giant spiral arms made of gas extending far beyond its more well-known dusty disk. This spiral structure — resembling a mini-galaxy — extends to nearly 1,000 astronomical units from the star, much farther away than the compact dusty disk that extends only about 60 astronomical units. One astronomical unit is the average distance from the Earth to the Sun, and equal to about 150 million kilometers.

To put the length of RU Lup’s spiral arms into perspective, Ricci pointed out the icy dwarf planet Pluto, of our own solar system, is about 40 astronomical units from the Sun.

A paper about the new images and what they reveal, “Large-scale CO Spiral Arms and Complex Kinematics Associated with the T Tauri Star RU Lup,” was recently published in The Astrophysical Journal.

Ricci’s fellow researchers include Sean M. Andrews, Jane Huang, Karin I. Öberg and David J. Wilner of the Harvard-Smithsonian Center for Astrophysics; Megan Ansdell with The National Aeronautics and Space Administration; Myriam Benisty with Universidad de Chile/IPAG France; John M. Carpenter of the Joint ALMA Observatory in Chile; Andrea Isella of Rice University; Laura M. Pérez of the University of Chile; Jonathan Williams of the University of Hawaii and Zhaohuan Zhu of the University of Nevada, Las Vegas.

Protoplanetary disks contain much more gas than dust. While dust is needed to accumulate the cores of planets, gas creates their atmospheres.

In recent years, high-resolution images of dust structures, such as the images taken by ALMA, have changed the understanding of how planets are formed.

Ricci and his colleagues argue that the new image of RU Lup and the spiral arms of gas, as well as what appears as solitary clumps of gas sitting among the arms, indicate that the current view of how planets are formed is too simplistic, and that planet formation may be much more chaotic than previously thought.

“The gas you are seeing in the image is very dense, and when gas in a disk is very dense, its gravity can play a big role,” Ricci said. “If the gas in the disk is dense enough, then it can produce enough gravity to produce new structures. According to some theoretical models, if the gas in the disk is very dense and cold, spiral arms can be formed, but observational evidence was lacking until we got this new image of RU Lup. Interestingly, if the conditions are right, these models also show that dense clumps can form in these spiral arms, and their gravitational contraction can give birth to giant gas planets.”

Another feature in the ALMA image of RU Lup that captured the researchers’ attention is the velocity at which the spiral arms of gas are moving.

“The further away an object is orbiting a star, the slower it moves,” Ricci said. “Instead, our new data indicate that parts of the spiral arms are moving at pretty high speeds, much faster than they should be moving.”

Ricci and his colleagues have several ideas for why the spiral arms are moving so fast, but no definitive answers yet. They also have myriad questions about the dense clumps of gas seen amidst those arms.

Their quest for answers has been put on hold for a while. The COVID-19 pandemic has temporarily shut down ALMA’s operations, with no clear date for when they will resume.

“We can hardly wait to get new data from ALMA,” Ricci said. “Until then, we’re learning how to be patient.”