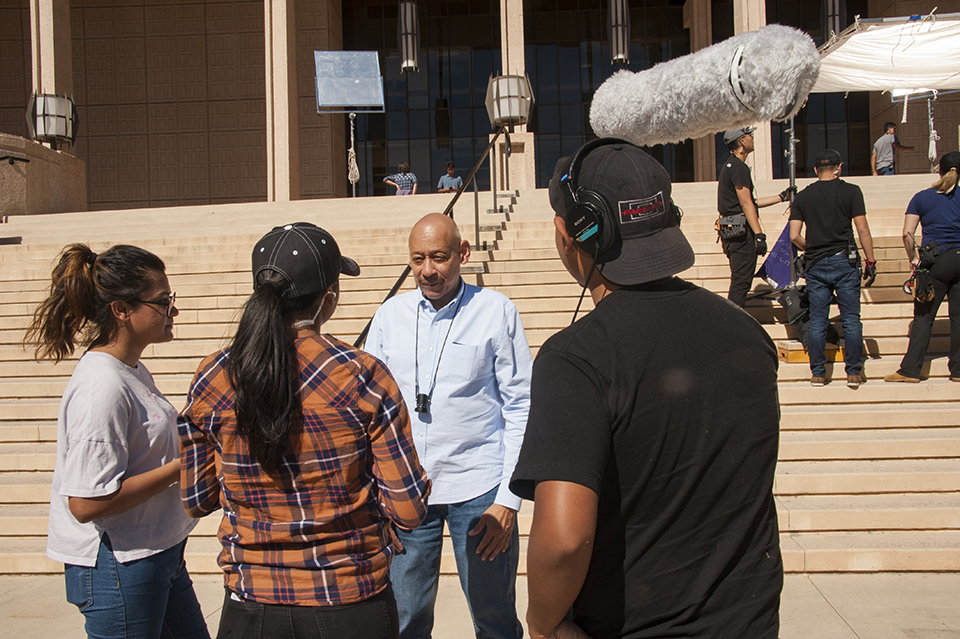 CSUN film professor Nate Thomas (center) on a set at CSUN with film students. Thomas argues that it’s well past time that the entertainment industry reflects the diversity of the people who live the United States. Photo by Lee Choo.

When it comes to what we see on the big and small screen, representation matters, whether on the screen, in the writers’ room or in the corner office, according to California State University, Northridge film professor Nate Thomas.

Thomas, head of the film option in CSUN’s Department of Cinema and Television Arts, said it is well past time that Hollywood and the entertainment industry begin producing products — whether movies, TV shows or web series — that reflect the diversity of the people who live in the United States. 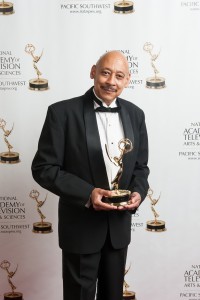 Nate Thoms won a a regional Emmy Award in 2014 for a television public service ad (PSA) campaign he produced and directed for the FBI. Photo courtesy of Nate Thomas.

“The entertainment industry uses people of color in shows, commercials and movies that often perpetuate stereotypes rather than truly represent who they are and what they have to bring to the table,” Thomas said. “America’s diversity is what makes this country so great, but still only a small group of individuals are represented at all times through all aspects of this industry.”

Thomas noted that Hollywood’s decision-makers have traditionally been white men, and white men continue to dominate most of the key leadership roles in the entertainment industry.

“When that’s who is making the decisions, then they are going to make shows and other decisions based off of their own life experiences,” Thomas said, “If Hollywood truly wants to diversify movies and television shows it makes, then it needs to diversify who is making the decisions, whether it’s greenlighting a project or writing and directing it. Until then, for those of us who are not white, it feels like we’re on the outside looking in.”

That diversity of viewpoints and voices is particularly important, Thomas said, when it comes to telling stories of racism and oppression.

“The day-to-day life experiences of people of color and their ancestors are dramatically different than those of the white people, it’s that simple,” Thomas said. “To tell those stories accurately, you need people in the room that have experienced that truth. Every creator has unique life experiences, and when people of color share theirs, it broadens the spectrum.”

Thomas said the effort to tell diverse stories is hampered by the fact that so many of the studios are run by white men.

“Studio management is not obligated to tell the story a person of color wants to tell,” he said. “When studios are owned and operated by individuals who look alike and think alike, then that poses a problem for the diversity of the content that is produced. It can end up looking and sounding the same, regardless of what an increasingly diverse audience might be interested in.”

Thomas, an Emmy winner, noted that the entertainment industry, through its variety of media, “can change the world for the better.”

“But if we want the world to change, then we need to show everything,” he said. “At some point, it needs to be absolutely necessary for people to turn on the television and see themselves reflected on the screen, as well as in who the studio owners, directors and members of boards of directors are.

“People of all ages need to see themselves as not just the sidekick or the funny character,” Thomas said. “When that happens, it broadens minds in incredible ways, and inspires people of color to achieve goals they may never have had before. To put it simply, representation matters, and it changes lives.”