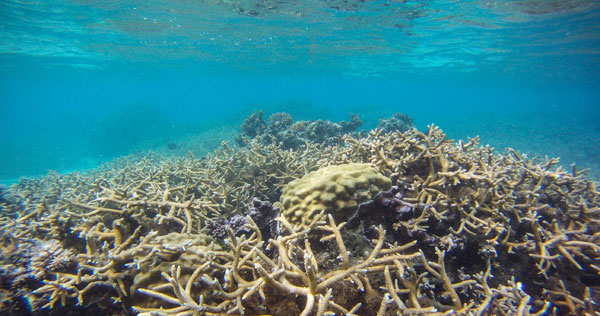 The world’s coral reefs may survive the effects of an increasingly warmer planet, but not in a state that most people would recognize, according to a new study by California State University, Northridge marine biologist Peter Edmunds. Edmunds, co-lead author Ruth D. Gates of the University of Hawaii and fellow CSUN marine biologist Robert Carpenter joined 20 other scientists from around the globe — including the United States, Australia, Taiwan, France and Kenya — to develop models, based on current research and historical data, on what will happen to the world’s coral reefs if climate change continues to warm the earth’s oceans. The result of their research, “Persistence and Change in Community Composition of Coral Reefs Through Present, Past and Future Climates,” was published today in PLOS ONE, the respected, international, open-access, online scientific journal.

Their findings provide insight into the future of the world’s oceans, which has implications for the communities and businesses that rely on the planet’s marine environments.

“It’s a stark contrast to what we know now,” Edmunds said, drawing an analogy to Charles Darwin’s theory of survival of the fittest. “We are talking about many of the grandest of corals — species forming massive boulders and tree-like colonies — not doing well at all. In a sense, becoming the losers. The winners are the more hardy species that seem to have done well in the recent past — small and fast-growing corals that are somewhat analogous to weeds in the garden. There will still be coral reefs, but the marine environment that we know now will be gone.”

David Garrison, program director in the National Science Foundation’s Division of Ocean Sciences, which funded the research, lauded the study.

“Amid the dire scenarios about the fate of coral reefs, this report is a more sanguine prediction for the future,” Garrison said. “Based on extensive analyses, the researchers suggest that a subset of resistant coral will make up future reef communities.”

The study grew out of a series of meetings Edmunds, Carpenter, Gates and ocean researchers from around the world had four years ago to discuss what reefs of the future might look like. Peter Edmunds heading out to do research on the coral reefs of French Polynesia near Tahiti. Photo courtesy of Robert Carpenter.

“We wanted to look at the evidence available to us objectively and ask: “Are the threats to coral reefs so dire that it is inevitable they will turn to seaweed and slime and the beautiful environments we have known for decades will be lost?” Edmunds said.

The scientists drew from their own research data — Edmunds and Carpenter have spent more than a decade studying climate change’s effects on the reefs off Moorea in French Polynesia and the Caribbean — and examined historical records that have tracked long-term natural changes and human impact on the world’s oceans. Their conclusion was that while coral reefs may not turn to slime in the current century, the majestic and vibrant underwater environments that most people associate with coral reefs will be gone. In their place will be new environments populated by small and weedy corals.

Among the oldest and most diverse of the earth’s ecosystems, coral reefs provide natural storm barriers for homes and beaches; habitat for more species per unit than any of the planet’s marine environments; commercial fisheries; tourism; and recreation jobs. Often called the “medicine cabinets of the 21st century,” the reefs’ plants and animals are important sources of new medicine. Scientists often refer to reefs as “the canary in the coal mine,” warning of the dangers ahead as the oceans’ continued warming and acidification threatens the status of marine ecosystems.

Edmunds said the study may draw some criticism from people who will accuse the researchers of denying the impact of climate change.

There is no denying the damage humans have done to the world’s oceans: “They are in dire straits,” Edmunds said.

“But we can’t give up hope,” he continued. “We wanted to see if there are glimmers of hope, a cause for optimism for the future that will encourage people to work hard for what is left.

“There is no question that coral reefs are critically changed compared to where they were just 30 years ago, and that is terrible news,” he said. “But there is enough left that it is extremely important to continue to work to preserve and study them. We need to work to save the world’s coral reefs, or we are in real danger of losing an entire ecosystem. If you accept the inevitable, then the inevitable will happen. We have to try to fight against that.”