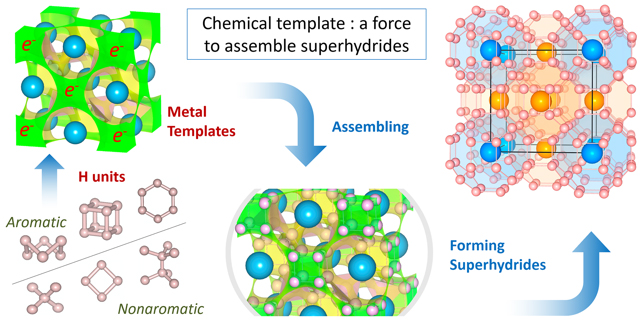 The metal sublattices in superhydrides form chemical templates due to the electron occupation of the quasi-atom orbitals that match the building units of H lattices. Many of these units are 3D aromatic and are largely stabilized by chemical templates of metals close to the s−d border. CSUN chemistry professor Maosheng Miao’s work explains the chemical mechanism of superhydride formation and provides an approach that can greatly enhance the efficiency of searching for complex superhydrides and other compounds by screening the metal templates first. Image courtesy of Maosheng Miao.

A subtle chemical interaction between metal and anion sublattices, not between atoms, in compounds matters when it comes to superhydrides — a new type of high-pressure compound with exceedingly high hydrogen composition and the ability to conduct electricity without energy loss when cooled below a critical temperature.

In particular, metal superhydrides could help provide the answers scientists have been looking for in their efforts to find ways to allow superconductivity without having to reduce the temperature to extremely low levels, according to California State University, Northridge chemistry professor Maosheng Miao, who is among the eight recipients of the prestigious 2022 Henry-Dreyfus Teacher-Scholar award. 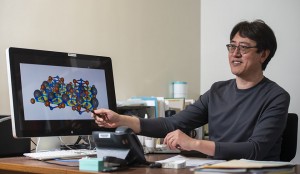 “The holy grail for a lot of materials scientists is room-temperature superconductivity,” said Miao, who teaches in CSUN’s College of Science and Mathematics. “The technology created by superconductivity is vital to so many parts of our lives. For instance, the MRI (magnetic resonance imaging) scans that are so important in the medical world are done by huge devices. Much of that machinery is used to keep temperatures cool to allow superconductivity to take place to create a strong magnetic field. Now, imagine if you could take those scans with machines that don’t need to be kept at a certain temperature? That could revolutionize medicine, and a whole lot of other industries that rely on superconductivity, as well.”

Miao said a new hope for that revolution might lie in metal superhydrides, chemical compounds that contain an abnormally large amount of hydrogen.

Determined to find the answers, Miao — a computational chemist who studies atoms and bonds and how they change under high pressure — proposed that metal lattice in superhydrides form templates that assist the formation of hydrogen covalent networks and applied computer simulations based on quantum mechanics to demonstrate and quantize this subtle chemistry.

His findings, “Chemical templates that assembly metal superhydrides,” was recently published in the journal Chem . The co-author of this two-author paper is Yuanhui Sun, a research scholar in CSUN’s Department of Chemistry.

Miao and Sun showed that the electrons in the metal sublattice (“what is left”) occupy the quantum orbitals located in the major voids between metal atoms. Since these local orbitals behave the same way as atomic orbitals, they call these voids “quasi-atoms”. While they overlay the hydrogen lattice on top of the electron state of the metal lattice,  a harmonic relation emerges – they match perfectly, as if the electrons in the metal lattice form a template that awaits and assists the assembly of the hydrogen network.

One key point was that the template effect is not found in all metals, Miao said.

“This template, this driving force, explains beautifully why some metals can form superhydrides and other metals, like aluminum, cannot,” he said, adding that the theory goes beyond superhydrides.

“It’s a general chemical bond theory,” Miao said. “This template effect exists in many composites, including table salt. And because it’s so subtle, that may be one of the reasons people haven’t look at it for the role it plays in superhydrides before now.”

Miao said he hopes his findings will move the conversation forward as scientists continue their search for room-temperature superconductivity.

“The theory significantly improves the efficiency of searching for new complex superhydrides by screening the metal templates,” he said. “Our work goes beyond superhydrides and transforms the empirical anion-in-metal approach into a true bond theory that can greatly enhance the efficiency of searching for new compounds and can resolve many puzzles in solid-state chemistry.”