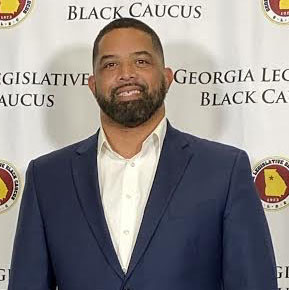 Steven Parker ’94 (Political Science) served as political director for the campaign of U.S. Sen. Jon Ossoff of Georgia, one of the most-watched and high-stakes Senate races in recent history.

When Steven Parker landed at CSUN in 1990, he knew that one key to getting connected on campus and avoiding feeling lost in a student body of 35,000 was to get involved in student government. Parker ’94 (Political Science) knew this because he’d done it before, serving in student government in high school and then getting elected as the first Black student body president at College of the Sequoias in Visalia.

At CSUN, Parker eventually rose from Associated Students (AS) senator to director of finance and then president (the third Black president in AS history). He led the student body through one of CSUN’s most challenging periods, after the 1994 Northridge earthquake.

“Because of my engagement in student government, it opened up a whole new world for me,” Parker said. “It swept me up, and I’ve been drunk on it ever since.”

That passion for government and service has led Parker on a whirlwind career, working for local and state elected officials, as well as in corporate law. But his latest work has taken him on perhaps the greatest thrill ride — as political director for the campaign of U.S. Sen. Jon Ossoff of Georgia, one of the most-watched and high-stakes Senate races in recent history. After Ossoff’s victory in a Jan. 5 runoff election, Parker recently accepted a job as the senator’s deputy state director.

On Jan. 28, Parker returned to campus, virtually, to share his journey “From CSUN to the U.S. Senate” with an audience primarily made up of students, faculty and alumni, in a Zoom event hosted by the College of Social and Behavioral Sciences.

Parker, an attorney, first connected with Ossoff, a media production executive and investigative journalist, when he made an unsuccessful bid for the U.S. House of Representatives in a 2017 special election. Later, Parker was working in the Atlanta City Attorney’s office when Ossoff tapped him again.

“I got another call,” Parker said. “Jon Ossoff said, ‘Hey, Steven, I’m thinking of running for Senate. What would it take to get you to quit your job and come and work for me as my political director?’

“It’s pretty impressive that he won his race against [incumbent Republican Sen.] David Perdue, who has one of the most influential political families in Georgia,” Parker continued. “At the beginning of our race, Perdue had about $10 million in the bank, and Jon had about half a million. If you’ve been watching the news during the campaign, you’ll know we shattered so many fundraising records. … you will learn that [Ossoff] is the real deal — a very sharp and bright individual who will do very well for the people of Georgia.”

In both U.S. Senate races in Georgia, the election results were so tight in the Nov. 3 general election that they triggered a runoff. In the end, voters handed victories to Ossoff and Rev. Raphael Warnock — and the U.S. Senate majority to Democrats, with a 50-50 split and Vice President Kamala Harris as the tiebreaker.

Parker was born in the Imperial Valley and raised with his siblings “in the middle of the desert” by a single mother, he said. The family lived in government-subsidized housing, and his mother worked multiple jobs just to make ends meet.

“One of the things I really appreciated about my mother was that she encouraged me to get involved, so I got involved in sports and student government and other high school activities,” Parker said.

After the family moved to Visalia and Parker excelled at College of the Sequoias community college, he considered his university options. Ultimately, he arrived at CSUN as a journalism major, hoping to become a TV news anchor — but it was his political science classes that quickly won his heart. The mentorship of his academic advisor, professor James Mitchell, and empowerment from AS advisor Bill Foster, helped drive his academic success and career path, Parker said.

“My time at Cal State Northridge was one of the most memorable times in my life, and it’s because of the relationships I formed there,” he said. “It was my time in the sandbox, learning to build coalitions, learning to try different political moves, learning the morality of how to govern. That time helped me iron out my motivations and how to get things done. … I’m very proud to be a Matador.”

After the devastating 1994 earthquake, a parade of national and local elected officials visited the CSUN campus to survey the damage. As AS President, Parker said, he would “put on my best suit and hand out my resume” to the visiting dignitaries.

With this networking, the young Parker scored an internship in the office of then-Mayor of Los Angeles Richard Riordan. After graduation, he participated in the Senate Fellows Program in Sacramento and worked for state Sen. Herschel Rosenthal in the San Fernando Valley. Some of his most satisfying work, Parker said, came in the following four years as he returned to the Mayor’s Office and worked with the late City Councilmember Tom LaBonge.

Parker decided to go to law school, choosing North Carolina Central University, an HBCU (Historically Black Colleges and Universities). After earning his Juris Doctor degree, Parker moved to Birmingham, Ala., to work as a corporate attorney — “a soul-grinding practice” that he learned was not for him, he said. After several more moves, Parker went to work for Ossoff, the Congressional hopeful.

During the CSUN Zoom event, students peppered him with questions during a Q&A session at the end of the hour. It was a great opportunity, faculty members said, for students to see how a political science degree can translate into a multifaceted career.

“I was so grateful that he shared his inspirational journey, and how his academic success was parlayed into career success,” student Kayla Latzer noted.

Yan Searcy, dean of the College of Social and Behavioral Sciences, introduced Parker and noted the Matador pride in his work and accomplishments. “We’re inspired — your story is just tremendous,” Searcy told him. “Thank you for all you do, and your ongoing contributions.”

In response to a question about the biggest obstacle he’d faced in life, Parker talked about his upbringing and trying to break through poverty.

“We didn’t have access to powerful people,” he said. “When I look at my life, there were a number of people who came along in my formative years who … built me up. I kept putting myself out there, in sports, in student government — I started to believe that I could grow beyond the circumstances I was in. I became adventurous and signed up for things that would take me into new experiences.”