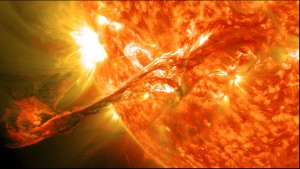 This picture from NASA shows a coronal mass ejection’s interaction with the sun.

A burgeoning field of astronomy is looking to better understand the way “space storms,” or coronal mass ejections (CMEs), affect the sun. At the 44th meeting of the Solar Physics Division of the American Astronomical Society in Bozeman, Mont., last week, California State University, Northridge physics and astronomy professor Debi Prasad Choudhary presented results to the group that could change the current line of thinking on the issue.

The CMEs Choudhary has been tracking are huge clouds of material that weigh billions of tons, zip through space at four million miles per hour and cause a lot of trouble on Earth to pilots, astronauts and satellites. It’s the CMEs that hit the sun that are perplexing scientists the most. Now, thanks to a research system tracking them using the Synoptic Optical Long-Term Investigation of the Sun (SOLIS) instrument located at the National Solar Observatory in Kitt Peak, Ariz., the CSUN prof has found a new way to look at an old problem: how can they predict when CMEs hit the sun?

“We were trying to find a precursor to solar flares that shoot CMEs into space,” Choudhary said. “With magnetic field measurements at multiple locations in the Sun’s atmosphere from SOLIS, we were able to show that changes in the vertical structure of the magnetic field lead to flares and CMEs.”