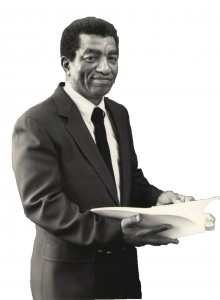 Alfonso F. “Rick” Ratcliffe served as dean of CSUN’s College of Engineering and Computer Science for more than a decade in the 1980s and early ’90s.

Ratcliffe had joined CSUN’s Department of Electrical and Computer Engineering in 1975, and he was appointed chair in 1978. He rose to become the college’s associate dean in 1980 and then dean in 1981. He retired in 1992, when the university granted him emeritus status. One of the first Black deans of a non-HBCU engineering school in the nation, he was considered a role model for many young scholars aspiring to a career in engineering, particularly those interested in teaching or research. Ratcliffe died in November 2020.

During his tenure as dean, Ratcliffe was instrumental in the success of the college’s Minority Engineering Program, as well as relationships with industry partners. He remained involved with the college during his retirement and served as a member of its Industry Advisory Board until recent years.

Among his many groundbreaking accomplishments, Ratcliffe was responsible for hiring more women into CSUN’s engineering programs than all other CSUs combined.

“I did not have the privilege to personally meet Dean Emeritus Ratcliffe, but he is remembered fondly in the college by those who knew him,” said Houssam Toutanji, dean of the College of Engineering and Computer Science. “He definitely has left an indelible mark, not only positively impacting the academic achievements of underrepresented students during his tenure as dean, and contributing his knowledge and experience with the college during his retirement, but also, upon his passing, leaving a lasting legacy that will impact students for years to come.”

Ratcliffe distinguished himself as an engineer, scientist, consultant and educator. He was known for his ingenuity, versatility and analytical ability. He grew up in St. Louis, where schools were still segregated, and moved to Los Angeles to live with an aunt and attend college. After serving in the U.S. Army and earning a bachelor’s degree in physics from UCLA, he also went on to complete a master’s and a doctorate in engineering from UCLA. His academic areas of interest included control systems theory, dynamics and applied mathematics.

In an interview, Ratcliffe once noted that he had wanted to build bridges since he was a boy, but because engineering jobs were “something rare” for Blacks at that time, he spent several years after college doing other jobs. His early engineering work included time as a test engineer at Rototest Laboratories. From 1969-74, before turning to teaching, he worked in design and manufacturing at Mattel, Inc. — where helped design the first musical doll.