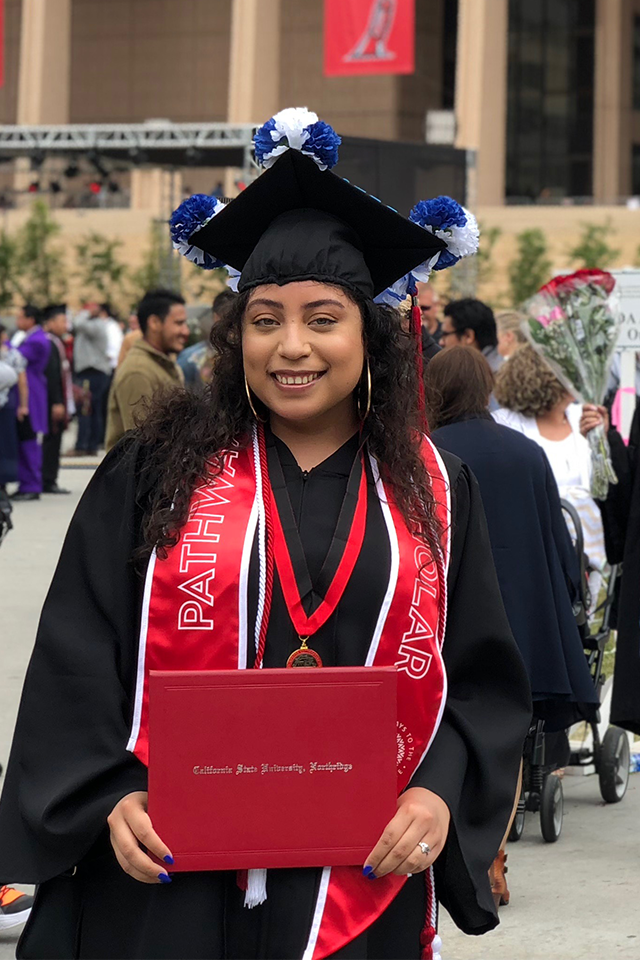 As an undergraduate student at CSUN, Shawntel Barreiro ’18 (Linguistics and Chicana/o Studies) had already proven herself to be a high achiever. At CSUN’s 2018 Honors Convocation, Barreiro received the most prestigious honor given to a graduating Matador — the Wolfson Scholar award. Now, less than two years after graduating from CSUN and starting her Ph.D. at The Ohio State University, she continues to take the world by storm, reaching yet another tremendous milestone in her academic success.

On March 30, Barreiro was selected to be part of the new cohort of the National Science Foundation (NSF) Graduate Research Fellowship Program. The program supports outstanding graduate students by covering the cost of tuition and fees, granting a three-year annual stipend and providing opportunities for students to conduct their own research. Past fellows include 42 Nobel Prize recipients and innovators such as Google co-founder Sergey Brin and “Freakonomics” co-author Steven Levitt.

“When I heard, I was elated,” said Barreiro. “This provides more of an opportunity for me to get into more depth with my research than I would have been able to otherwise.”

With her fellowship, Barreiro plans to continue her research into Salvadoran Spanish words and how they correlate to diasporic identity, which involves how migrant populations retain components of their culture and identity through language. She also hopes to use the opportunity to branch out further in the academic field and encompass other varieties of Central American Spanish.

A daughter of immigrants from El Salvador who came to the United States after fleeing the country’s civil war in the 1980s, Barreiro started looking at Salvadoran Spanish after a summer program at Yale. There, she tried simple online and library searches for the topic but found little information.

“That only piqued my interest even more,” she said, finding that learning more about her own community means conducting the research herself.

Barreiro’s passion for linguistics was sparked after taking French in high school, where she grew interested in the similarities between French and Spanish and why those similarities existed. She continued to water the seed at CSUN, taking her research far beyond the classroom by developing it through BUILD PODER, where she worked closely with professor Emily Russell. She also took advantage of research opportunities as a Sally Casanova Pre-Doctoral Scholar.

The NSF fellowship serves as a reward for Barreiro’s diligence in her research. Though it is hard work, she said, “This is just me doing the things that I wanted to do. … It’s something I do where I could say, ‘I’m enjoying this!'” 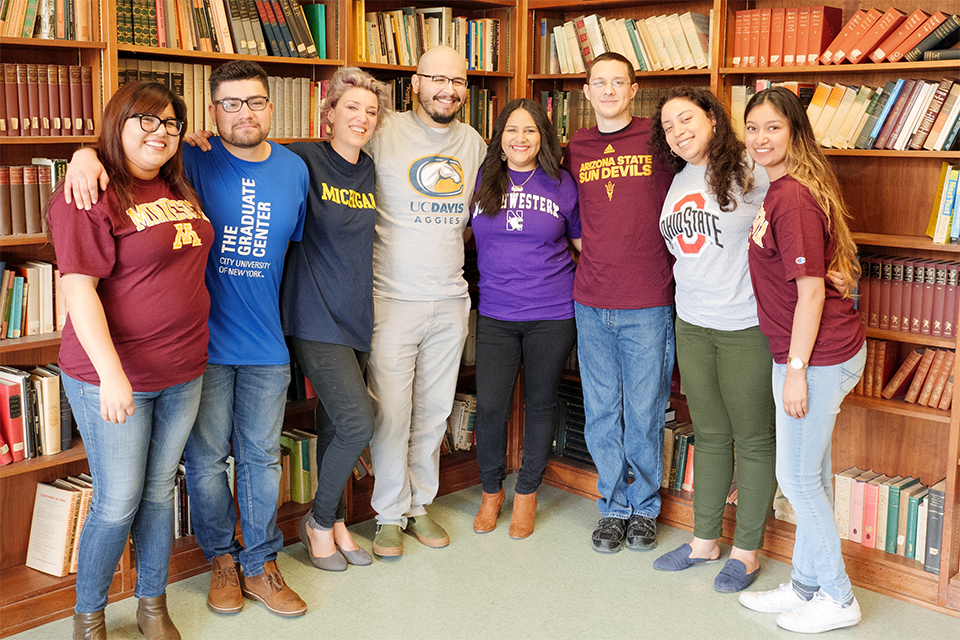 Shawntel Barreiro with her fellow scholars from the inaugural cohort of the HSI Pathways to the Professoriate program. Photo courtesy of Heidi Schumacher.

Barreiro also said she credits much of her preparation for the NSF fellowship and her current doctoral studies at The Ohio State University to her time in the HSI Pathways to the Professoriate program, where she participated in CSUN’s inaugural cohort. HSI Pathways, through a partnership with The Rutgers Center for Minority Serving Institutions and a grant from the Andrew W. Mellon Foundation, prepares undergraduate students for graduate and doctoral studies and supports them in pursuing a career as a professor in the humanities and other related fields.

Heidi Schumacher, coordinator of HSI Pathways at CSUN, was one of the first of Barreiro’s close Matador friends to receive the good news. When she got the text from Barreiro, she said, “I was thrilled for her but not totally surprised. … Shawntel was already an exceptional student at CSUN.”

Schumacher added, “It was really impressive to watch her invest that much time into building and refining skills, figuring out her research agenda and her voice as a scholar — what she wanted to do with her work, where she wanted to take it and how she wanted it to impact communities.”

Barreiro said she appreciates having a strong support system at CSUN, which includes mentors such as Schumacher and professors David Medeiros, Ana Sánchez-Muñoz and Emily Russell, as well as her friends from the HSI Pathways cohort.

“With their support, I was able to thrive and dig deeper and meditate on the things I was invested in,” Barreiro said.

After she earns her doctorate, Barreiro said, she hopes to continue her research within the university system and, perhaps, teach as a professor someday.

“I realized Shawntel had potential as a future researcher and scholar the moment I met her,” said Sánchez-Muñoz, a linguistics and Chicana/o studies professor who assisted Barreiro in completing her thesis project during her senior year at CSUN.

“She is enthusiastic, curious, hardworking and consistent, which are some of the qualities that have helped her succeed at every stage of her academic path so far,” said Sánchez-Muñoz. “She will go on to do great things, and I truly hope she continues to be in touch with us here at CSUN, so that we may continue to cheer her on.”