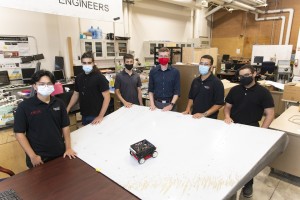 Part of the CSUN Team. Photo by Lee Choo.

A team of CSUN mechanical engineering students won multiple awards in a NASA competition ​​this past spring that asked institutions with large populations of historically underrepresented students to design technology for a future mission to the moon.

The 39 students — members of CSUN’s American Society of Mechanical Engineers Student Chapter — came up with a design for two robots, named Vision and Wanda, after the Marvel comics characters. The robots are designed to work together to examine spacecraft for damage that might be missed by human inspectors.

The project was part of the NASA MINDS Undergraduate Design program, a multi-semester experience that challenges undergraduate students to design and build technologies for possible use in NASA’s Artemis mission, which aims to land the first woman and person of color on the moon by 2024.

“It was something very new, but like with any new challenge, it gives you an opportunity to grow,” said Ashley Bermudez, a rising senior who led the drivetrain team, one of the CSUN team’s four sub-teams that collaborated to build the robots.

The CSUN team placed in the top three in multiple categories, earning third place overall among 26 universities, and a $1,000 prize. They also placed second for their systems engineering paper and their poster.

“We had an amazing team, with a lot of amazing people on it,” said Garabed Simitian, project leader and rising senior, who suggested creating the robots as an assignment for the club. “I loved working with them. They were all great.”

The NASA MINDS program is intended to help build a diverse science, technology, engineering and math (STEM) workforce. CSUN’s College of Engineering and Computer Science is among the most diverse in the nation and prides itself on its work to fill gaps in the STEM workforce and provide opportunities to students from underrepresented backgrounds. 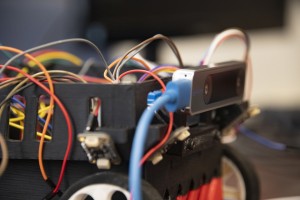 The robot’s structure is made entirely from 3D-printer parts. Photo by Lee Choo

Vision and Wanda were designed to perform what is known as nondestructive testing — a common method of inspecting material for internal damage, without the need to take the material or object apart. This kind of testing is extremely important to NASA because the composite materials used for the construction of spacecraft can be difficult to inspect and detect internal damage.

The CSUN team designed the robots to crawl around the surface of the spacecraft autonomously to test locations, communicating with each other and performing tests with the help of ultrasonic transducers — devices that generate and receive ultrasound energy.

In order to make the design process easier, the students broke into four sub-teams, focused on the robots’ chassis, drivetrain, systems and sensors.

Each group evaluated their options, developed ideas, and analyzed the pros and cons of each one. Next, they chose the design that would best fit their requirements, and focused the rest of their time refining them to make sure the robots were in the best possible shape for testing. Due to the COVID-19 pandemic, the students had to meet virtually, and individual members had to perform the testing at home.

The final stage was a challenge, said the students. First, the team had to compromise their design and settle for building one robot due to time constraints. Additionally, they had to deal with unexpected problems that came up during testing. For example, the drivetrain sub-team had to modify their design — replacing the two wheels on each side with four — because the robot was not driving normally. 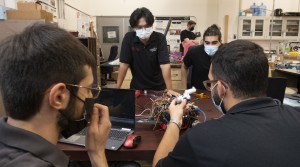 Students working on the robot. Photo by Lee Choo

Dealing with issues like this is a big part of the learning experience, said professor Christoph Schaal, the team’s faculty advisor.

“For example, trying something and realizing it doesn’t work, [learning] what to do in that scenario, how to stay on schedule,” Schaal said. “Team members stayed active through the entire two semesters — that speaks for itself that they were really invested in it.”