In the annual competition, students work in teams to design and build efficient, highly engineered vehicles for everyday use — from commuting to work to carrying goods to market. 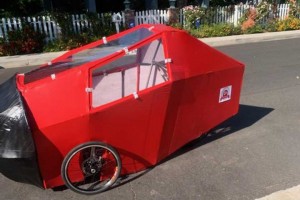 The ASME Human Powered Vehicle Competition is normally a national event. Because the COVID-19 pandemic forced the competition to take place virtually, however, the event was opened up to top engineering schools around the world. The CSUN team was advised by professor Aram Khachatourians and led by the Chief Project Engineer, CSUN senior Daniel Roberts ’21 (Mechanical Engineering). This year in the event, they placed ahead of schools including USC, the Rose-Hulman Institute of Technology, Universidad Nacional Autónoma de México, and the Indian Institute of Technology.

“Being virtual was definitely a struggle but within that, we were able to figure out what our weaknesses were,” Roberts said. “Now that it is over, I feel ecstatic. We have had a history of doing well at CSUN so being able to live up to that despite all of our trials and tribulations throughout the year, it meant a lot. It boosted our confidence to know we were able to maintain that credibility.”

CSUN’s team has finished in the top three of the national competition every year since 2015.

In the competition, teams are judged based on their vehicle’s effectiveness and creativity. They’re allowed to take ideas from previous years, but they are required to list anything they are reusing. The innovations are important for advancing the field of human-powered vehicles, which are an increasingly viable form of sustainable transportation, according to ASME. 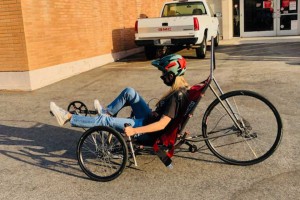 The CSUN team’s 2021 vehicle took inspiration from previous years and added their own twist to advance it. They used a three-wheel tadpole design — with two wheels in the front and one in the back — a design CSUN teams have used previously. One of the biggest changes they made was to the fairing, an important panel that fits around other panels to improve appearance and performance. Instead of using a full carbon fiber fairing, they incorporated thermoplastic airplane fabric, making the vehicle lighter and easier to assemble.

While brainstorming creative ideas and putting everything together, the team had to find a way to work in a virtual setting. This hurdle made the process extremely different from previous years. Communication was difficult without the ability to monitor what everyone was doing as they were doing it, said Roberts. 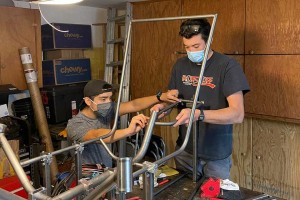 The team worked long and hard through a pandemic to get this done.

Every year, the team recruits the best of the best to help carry on the legacy of previous CSUN teams. To join the team, students must complete an application and resume, which is not typical of other teams, according to Khachatourians. Out of about 65 to 70 applicants, only 25 to 30 students make it onto the team.

“Former members of the team always email me regarding job interviews they have in which the project is brought up,” Khachatourians said. “That is one of the best parts of my job here at CSUN. Giving the team that confidence to be able to say that they were able to go out there to make a difference and build a vehicle, and this year do it during a pandemic, is very meaningful.”