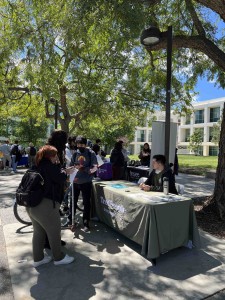 Students gather around the TreePeople booth for volunteer opportunities. Photo courtesy of Unified We Serve

The 13th annual Cesar Chavez Service Fair returned to campus this year on March 29th. It’s an event that’s organized by Unified We Serve, a program at CSUN that recruits volunteers to serve in the community. The fair honors the late labor leader by bringing local nonprofit organizations to campus to connect with students looking for volunteer opportunities.

Cesar Chavez was a Mexican-American labor leader and civil rights activist who dedicated his life to improving the working and living conditions of farmworkers in the United States. Chavez, along with American labor leader and civil rights activist Dolores Huerta, co-founded the National Farm Workers Association, which later merged with the Agricultural Workers Organizing Committee to become the United Farm Workers labor union.

Past fairs have been large events with around 30 organizations and multiple performances. Last year’s fair was held virtually. This year, due to pandemic restrictions, the event was scaled back to eight booths, a live mariachi band, and one guest speaker. Students were also treated to free food which is a staple for this event.

“Since we’re slowly coming back we only have a few organizations,” said Esmeralda Sanchez, the events assistant for Unified We Serve. “Organizing this can be a little stressful but once it’s done it’s a lot of fun to see the organizations come out and recruit students.”

A popular booth was Guide Dogs of America and Tender Loving Canines where a golden retriever puppy named Presto was constantly surrounded by students. Guide Dogs of America’s Puppy Coordinator Stephanie Colman was there looking for foster homes for other puppies in training.

“I’ve been here a couple of times, but the past two years because of COVID-19 we haven’t been doing many recruitment events like this,” said Colman. “I would love to get more CSUN students involved in helping to raise these puppies though.”

First-year criminology major Jasmine Raymundo decided to attend the event because it caught her eye and because she was interested in volunteer opportunities.

“I found a few volunteer opportunities here and I’m excited to check them out,” said Raymundo. “This is my first CSUN fair and event and I’m really liking it.”

Also at the fair was guest speaker Ernesto Ayala who is the head of the La Raza Unida Party, which is a political party aimed at rights and political power for the Chicano community. Ayala also had a booth showcasing his organization’s mission.

Towards the end of the event, Ayala made an impassioned speech on the continued importance of Cesar Chavez’s work to empower Mexican-Americans to be politically active. “Something that [Cesar] Chavez understood,” said Ayala, “was that we need to be organized. Because that is the only way we can fight. Everything that we have as Chicanos, as Mexicanos, as raza, we have had to win by fighting. Nothing, absolutely nothing, was given to us.”

Other booths at the fair included TreePeople, which is an organization that inspires people to plant and care for trees, Bresee Youth Center whose mission is to battle poverty by empowering youth and families in Los Angeles, Project Angel Food which provides house-bound individuals with ready to eat meals every week, School on Wheels which provides tutoring for unhoused students and 2B Happy, an organization that works to empower individuals of all abilities through art and creativity.