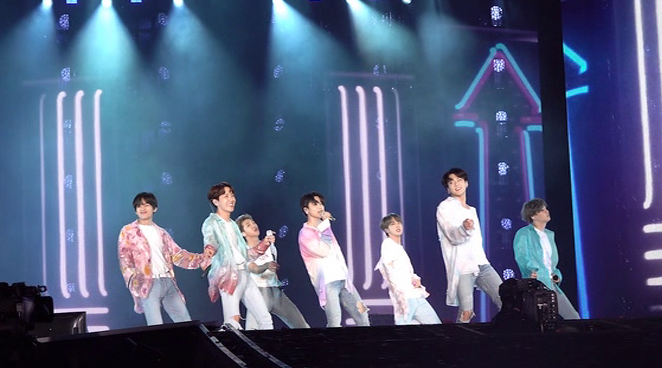 BTS performing at the Rose Bowl stadium in Pasadena during their 2019 “Love Yourself” tour. Image courtesy of Frances Gateward.

The sensationally popular South Korean band BTS was the inspiration behind a conference this month at CSUN that combined academics and fun, as the group’s music was a window into a wide range of topics — from choreography to social justice activism.

BTS consists of seven members — Jin, Suga, J-Hope, RM, Jimin, V and Jungkook — and first debuted in 2013 with a solo album, “2 Cool 4 Skool.” Their popularity has only grown from there. With music videos that boast billions of views on YouTube, an active social media presence and a dedicated fan base that frequently takes part in activism in their name, the band is well and truly a worldwide phenomenon.

On May 1-2, that fan base — known as ARMY (Adorable Representative M.C. for Youth) — gathered virtually with academics, music industry representatives and media members for BTS: A Global Online Interdisciplinary Conference, hosted by CSUN. Attendees gathered to share their love of BTS and to examine the culture created by and surrounding the band. This was the second global academic conference on BTS, following an event in London in early 2020.

“I was struck by how different, how utterly unique, BTS is compared to other artists,” said Wenda Fong, who gave opening remarks at the conference. Fong, a California State University trustee, worked in the entertainment industry for 40 years as a television producer, host and executive, including producing specials and shows that featured artists such as Lady Gaga and Michael Jackson. She is co-founder and chairperson emeritus of CAPE, the Coalition of Asian Pacifics in Entertainment, which is the largest and longest-running organization for Asian American Pacific Islanders in the entertainment industry.

“They are singular, and how open they are, how much they share their lives, all the behind-the-scenes videos, and free-for-all live streaming,” Fong continued. “This is unheard of here in the U.S.; there are teams of people [here] whose jobs are to bar the image of their celebrities. Of course, I’m not naïve enough to think that they don’t have people protecting [their] images, but the accessibility, vulnerability and authenticity that they share and convey is truly remarkable.”

Fong spoke on how BTS marketed itself, calling it “genius.”

“The marketing of BTS is a lesson in success without following the traditional routes that we use in the United States, and in the Western world for that matter,” she said. “It was done by a small company with few resources. They’ve maximized the use of social media beyond virtually anything I’ve seen, with a volume of content that is nothing short of astounding.”

Crystal Anderson, a professor at George Mason University in Virginia and author of “Soul in Seoul: African American Popular Music and K-pop,” and Colette Balmain, from Kingston University London, gave keynote lectures at this event. Anderson’s lecture was on K-pop as an interdisciplinary field of study, specifically how it impacted pop culture, comparing BTS’ impact to that of the Beatles in the 1960s. Balmain’s lecture addressed love and compassion as a radical tool to make social change, noting the parasocial relationship between BTS and ARMY.

More than 1,400 people from 39 different countries attended the virtual conference, with the oldest attendee being in their 70s. Presenters hailed from 16 different nations. Participants connected in the Accelevents chat box and hung out in a virtual lounge space in between sessions, sharing their appreciation for the conference. Many noted that the virtual conference format allowed them to attend without having to worry about how many people can fit in a certain location, social distancing or the cost of travel.

One attendee noted that she bought tickets to the event because her daughter, an avid ARMY member, told her about the activism within the BTS community, including the time when ARMY members raised $1 million for the Black Lives Matter movement in just one day to match the $1 million donated by BTS.

“Though it was unfortunate that we could not meet face-to-face, the online platform allowed us to reach more people, in more locations, with a multitude of varied backgrounds and interests,” said Frances Gateward, a CSUN professor in the Department of Cinema and Television arts and the lead organizer for this event. “It is not often that a scholarly conference focused on one subject can bring together academics, fans and professionals from careers as disparate as human rights attorneys, social psychologists, theologians, music industry professionals, K-12 educators and more.”

Recordings of the conference will be available to the public, accessible through the Accelevents platform.