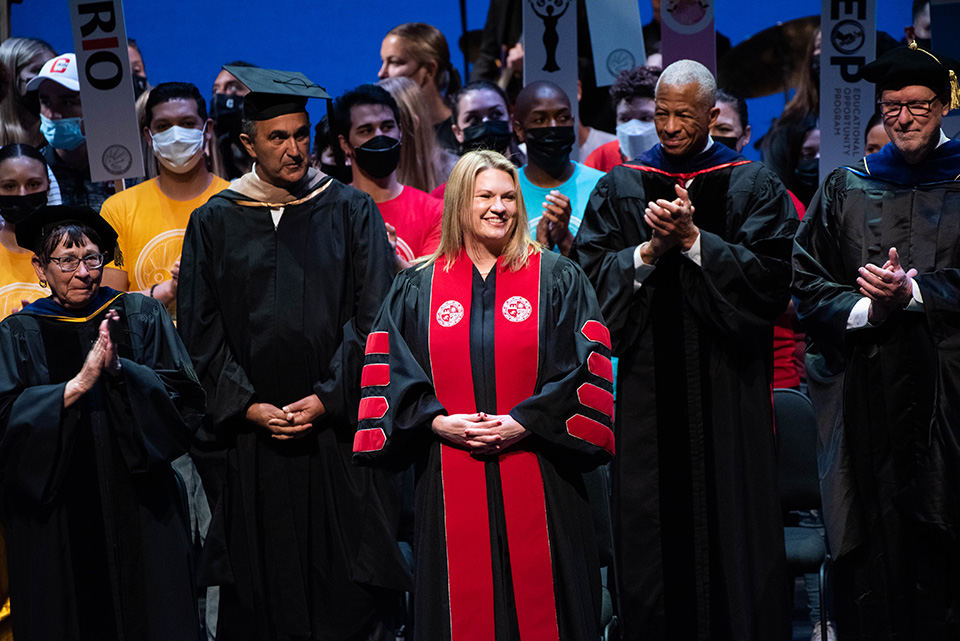 CSUN celebrates the investiture of its sixth president, Erika D. Beck, on March 14, 2022. During the morning’s ceremony, Beck stands on stage at The Soraya, surrounded by students, alumni and other dignitaries. Photo by David J. Hawkins.

With pomp and joy — and a buzz of excitement that permeated the campus — CSUN officially marked the start of a new chapter in the university’s history March 14, with the investiture of its sixth president, Erika D. Beck.

In a formal ceremony at the Younes and Soraya Nazarian Center for the Performing Arts (The Soraya), Beck was officially invested by CSU Acting Chancellor Steve Relyea. The ceremony, which was also live-streamed online, was attended by dignitaries and guests from across the country.

During the ceremony, Beck spoke about her vision for the university and building momentum for an equity-minded culture on campus. CSUN, she said, is an institution rooted in imagination, idealism and hope.

“It is an extraordinary honor to stand before you as we mark this special occasion in our history, and turn to a crisp new page in our collective journey,” Beck said. “Today, we take the time to reflect on where we have been and use the lens of history to inform our future.

“Each and every time this academic community has been called upon to lead, you have demonstrated your unwavering commitment to the understanding that your work transforms lives,” she continued. “That the advancement of knowledge enhances the common good, that an educated populace serves as the fundamental bedrock of our democratic republic, and that education is the surest path to a brighter, more equitable future.”

Beck, who took office on Jan. 11, 2021, succeeded former President Dianne F. Harrison, who retired in early 2021. Beck came to CSUN from CSU Channel Islands, where she was president for more than four years. Prior to that, she was provost and executive vice president at Nevada State College.

“Now is the time to cement our values,” Beck said during her address. “Values of inclusiveness, of enabling human potential, of evoking excellence in our students and ourselves, and of our commitment to a world-class and accessible education that supports a global society.”

The new president started the day’s festivities by laying a red rose at the base of the campus’ iconic Matador Statue. In a beloved CSUN tradition, students and other members of the university community place red roses at the Matador’s feet for good luck during final exams, or to celebrate major accomplishments and milestones such as birthdays, engagements and graduations. Students, faculty and staff lined up after Beck to lay roses at the statue.

The tradition of the rose was followed by the ceremony at The Soraya. A procession of students, faculty, university leaders and other dignitaries dressed in full academic regalia entered the hall to boisterous jazz performed by an ensemble of CSUN Jazz Studies students and alumni. The program was bookended by a welcome and a closing blessing by tribal President Rudy Ortega Jr. and CSUN alumnus and tribal Vice President Mark J. Villaseñor ’16 of the Fernandeño Tataviam Band of Mission Indians.

The masters of ceremonies, CSU Board of Trustees Chair Lillian Kimbell and CSUN Vice President for Student Affairs and Dean of Students William Watkins ’74, opened the program with a land acknowledgement, recognizing that the university stands on “the ancestral and unceded territory of Sesevenga.”

“We honor their elders, past and present, and the Sesevitam descendants who are citizens of the Fernandeño Tataviam Band of Mission Indians,” Watkins said. “We recognize that the Sesevitam are still here, and we share this land acknowledgement as evidence that CSUN is committed to lifting up their stories, culture and community.” 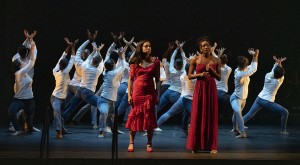 “CSUN is in good hands, and students will be able to leave the university saying they are proud to be Matadors, thanks to the leadership and guidance of President Beck,” Hay told the audience. “With our new president, I am sure that whatever we start here in this great university will indeed change the world for the better.”

Later in the day, the campus community celebrated with an “Afternoon Kickback with President Beck” on the University Library Lawn, where hundreds of students, faculty and staff mingled with the new president and enjoyed food, dancing, music performances, photobooths and raffle prizes.

For more about the investiture and to watch a recording of the ceremony, visit csun.edu/investiture.