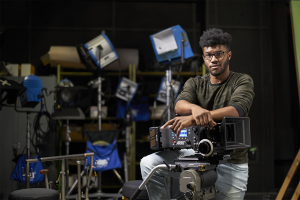 For the sixth consecutive year, CSUN has been ranked among the nation’s best film schools by TheWrap, coming in at No. 17 on this year’s list.

The award-winning entertainment news website named CSUN to its list of the Top 50 Film Schools of 2021, alongside prestigious universities such as the University of Southern California, AFI Conservatory and New York University.

CSUN’s No. 17 ranking is four places higher than in 2020 and five places higher than 2019. TheWrap’s annual ranking of schools was determined by an anonymous poll of more than 1,200 entertainment-industry insiders, educators, deans, filmmakers and film pundits, along with experts who evaluate each school.

CSUN also was recognized for joining the Green Film School Alliance, along with eight other schools that are committed to sustainable production practices.

CSUN consistently has gained national and global recognition for its film program. This year, CSUN was named by The Hollywood Reporter as one of the country’s Top 25 film schools, and Variety ranked it in the Top 10 in an international ranking of 50.