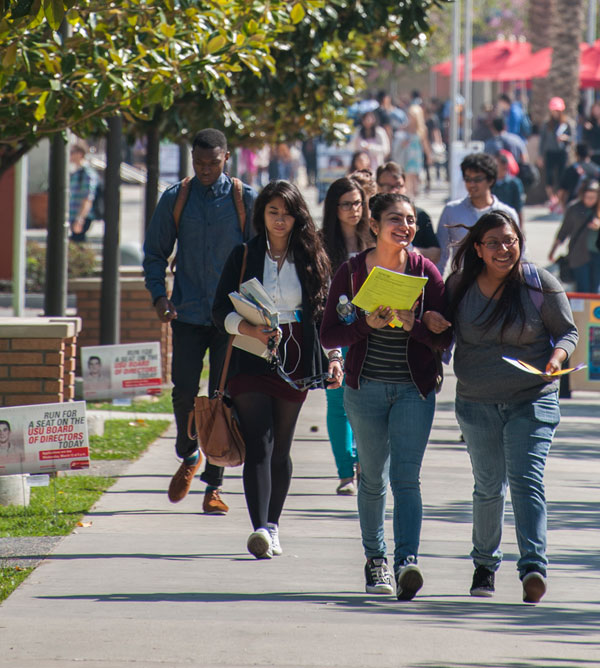 CSUN is teaming up with the University of Pennsylvania to launch "Pathways to the Professorate" to increase the number of Latinos working in the humanities. Photo by Lee Choo.

Officials at California State University, Northridge are teaming up with their counterparts at the University of Pennsylvania to launch an unprecedented program to increase the number of Latino professors working in the humanities.

The program, Pathways to the Professoriate, is supported by a $5.1 million grant from the Andrew W. Mellon Foundation to the University of Pennsylvania for its Graduate School of Education’s Center for Minority Serving Institutions. Over a five-year period, the program will prepare 90 students from Hispanic Serving Institutions (HSIs) across the United States, including CSUN, to move forward and get doctorates in humanities-related fields.

The program comes as colleges and universities across the country struggle to develop faculty that reflect the nation’s growing ethnic and cultural diversity.

“Cal State Northridge was honored to be selected to participate in the Pathways to the Professoriate initiative,” said Elizabeth Say, dean of CSUN’s College of Humanities. “We know well the quality of our students — what they sometimes lack is opportunity. This partnership with the Penn Center for Minority Serving Institutions and the Mellon Foundation will provide unparalleled opportunity for our students to achieve their educational goals. Together with our other institutional partners, we can begin to transform the professoriate to better reflect and serve the next generation of university students.” Elizabeth Say, dean of the College of Humanities.

The problem of not having enough minorities in the professor pipeline cannot be fixed overnight Marybeth Gasman, director of the Penn Center for Minority Serving Institutions, which will oversee the project.

“We see this program as a way to begin a fundamental change,” Gasman said. “We hope this creates a strong pathway to graduate school for Latino students that will grow over time, with these students supporting one another, and one day becoming mentors themselves.”

Mariët Westermann, vice president at the Andrew W. Mellon Foundation, said that as the demographic profile of the United States changes, the country has a compelling interest to obtain the full participation of previously underrepresented communities.

“The past decade has seen considerable gains in doctoral attainment for Latinos, yet these gains have not kept up with the growth in the U.S. Hispanic population,” she noted.

As part of Pathways to the Professoriate, selected CSUN undergraduates in the humanities, social sciences and related fields will take part in intensive summer research programs and cross-institutional conferences, while also receiving mentoring and support for applying to and enrolling in graduate school.

CSUN faculty mentors will work closely with each student beginning in the second semester of his or her junior year, and the relationship will continue as the student matriculates into Ph.D. programs. The summer research programs at CSUN will focus on an exploration of humanities-based methodological approaches, as well as professional skills, including academic writing, graduate school application writing and preparation for taking the GRE. The standardized admissions test is required by most graduate schools in the United States.

Say noted that in the academic year 2012-13, CSUN awarded 1,143 bachelor’s degrees in the humanities and social sciences. Thirty-three percent of those went to Latinos.

“We have the students, and now we have a way to help them go on to Ph.D. programs that they may have only dreamed about,” she said. “The fact that CSUN faculty mentors will work intensively with each student beginning in the second semester of junior yea — and they will be there as the student goes on into Ph.D. programs — is critical. This investment of time and resources is a game-changer for our students.”

The Penn Center for Minority Serving Institutions brings together practitioners from Historically Black Colleges and Universities, Tribal Colleges and Universities, Hispanic Serving Institutions and Asian American, Native American and Pacific Islander Serving Institutions. Based in the University of Pennsylvania’s Graduate School of Education, the center’s goals include elevating the educational contributions of minority-serving institutions; ensuring they are part of national conversations; bringing awareness to the vital role such institutions play in the nation’s economic development; increasing the rigorous scholarship of the institutions; connecting the institutions’ academic and administrative leadership to promote reform initiatives; and strengthening efforts to close educational achievement gaps among disadvantaged communities.

Founded in 1969, the Andrew W. Mellon Foundation endeavors to strengthen, promote and, wherever necessary, defend the contributions of the humanities and the arts to human flourishing and to the well-being of diverse and democratic societies by supporting exemplary institutions of higher education and culture as they renew and provide access to an invaluable heritage of ambitious, path-breaking work.

Serving more than 41,000 students each year, CSUN is one of the largest universities in the United States, and it has an impact to match its size. CSUN is a national leader in awarding bachelor’s degrees to underrepresented minority students and master’s degrees to Hispanic students. It also enrolls the largest number of deaf and hard-of-hearing students of any U.S. state university. CSUN’s 171 academic programs and engaged centers enjoy international recognition for excellence. CSUN currently partners with more than 100 institutions of higher education in 22 countries around the globe and attracts the largest international student population of any U.S. master’s-level institution. Situated on a 356-acre park-like setting in the heart of Los Angeles’ San Fernando Valley, the campus features modern educational buildings and world-class LEED Gold-certified performing arts and recreational facilities recognized as among the best in the country. CSUN is a welcoming university that champions accessibility, academic excellence and student success.