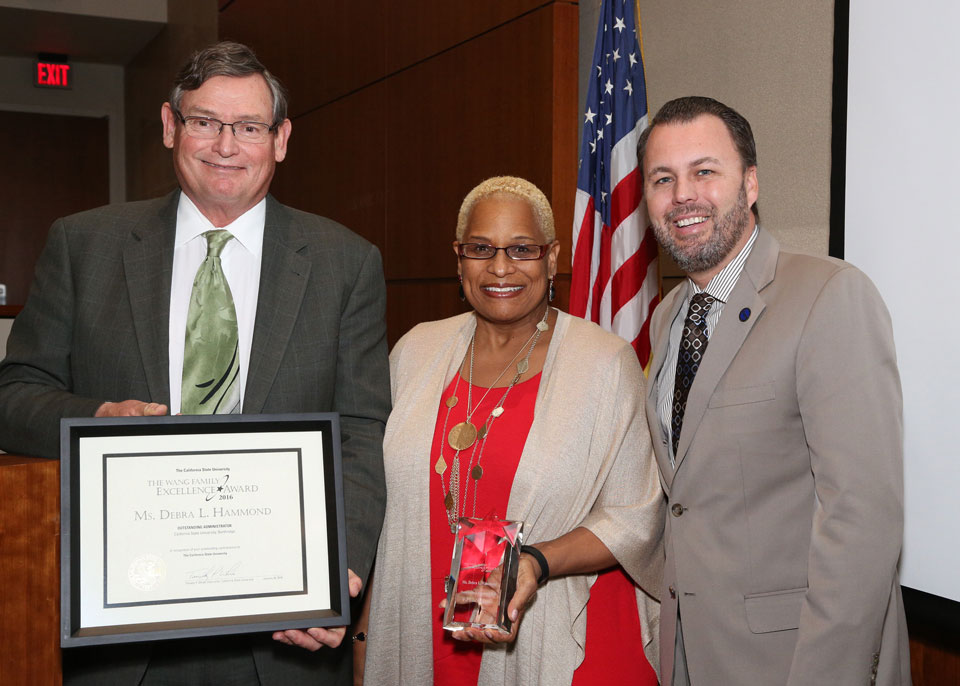 From left, CSU Chancellor Timothy White, Debra Hammond and CSU Board of Trustees Chair Lou Monville shortly after Hammond was presented with her award at a CSU board meeting in Long Beach. Photo courtesy of the CSU Chancellor's Office.

Walking across the campus of California State University, Northridge, you’d be hard pressed to find a student whose life has not been touched by Debra Hammond, executive director of the University Student Union (USU).

Whether they sit under an umbrella in the USU courtyard, run on a treadmill in the Student Recreation Center or attend a lecture in the Grand Salon, thousands of students over the years have been positively impacted by Hammond. For that, the California State University (CSU) Board of Trustees recognized her with its highest honor, the Wang Family Excellence Award, on Jan. 26.

The honor is given each year to five CSU faculty and staff members for their extraordinary commitment to student achievement and exemplary contributions in their fields. The awards, which include a $20,000 grant to each recipient, were established through a gift from CSU Trustee Emeritus Stanley T. Wang and are administered through the CSU Foundation.

“This is so surreal, overwhelming and amazing,” Hammond said. “It is wonderful to have your work recognized like this. There are a lot of people on campus who really care about the students, so I’m really honored and humbled to receive this award.”

This is the second consecutive year that the CSU has tapped a CSUN staff or faculty member for the award. In 2015, CSUN cinema and television arts professor Nate Thomas won the faculty award for his groundbreaking achievements and enormous impact on his students.

Hammond earned a bachelor’s degree from Rutgers University and a master’s degree in educational administration from CSU Los Angeles, where she also served as the USU director for six years, before coming to CSUN in fall of 1993. During her 22 years at CSUN, she has been responsible for the overall strategic direction and vision for the union.

Under her leadership, CSUN’s USU has become a central gathering spot on campus, where students deepen their connection to the university community and have access to resources that foster their progress to graduation. She said supporting students’ paths to graduation is rewarding because she knows just how much a college degree can change their lives.

“I love CSUN students,” Hammond said. “I love the fact that we serve so many first-generation students because they want to be here. I feel like they have a deeper appreciation because they know that by going to CSUN, it’s a game changer — not just for them, but for their families. It can change generations. We have the opportunity to expose them to concepts, ideas, thoughts, things they have not necessarily seen before, but they want to explore. What we do is important, and that’s why I continue to do it.”

Hammond has advocated for innovative ways to support student health. She led a team of 62 people in establishing the Student Recreation Center (SRC), which opened in January 2012 and has won 11 architectural awards for design. The SRC has more than 31,000 student members and serves 4,300 members daily. She also oversaw the development of the Oasis Wellness Center, which opened in 2015, to mitigate the impacts of students’ poor sleep habits and ineffective stress management on their academic performance. It is one of the first comprehensive wellness centers on a college campus in the United States.

Hammond said these projects came from “truly” listening to students and figuring out their needs, as well as engaging students in the facility development process.

“You have to keep asking them questions and be open to experiences and discovery,” Hammond said. “As directors of a department, we can have a lot of preconceived notions about what we think is right, and sometimes we are not right. We have to be open enough to really hear people, to listen at a deeper level and then ask questions. That’s the greatest tool we have.”

Senior Shataj Khan, chair of the USU board of directors, said Hammond’s ability to listen to students and support their growth fosters student success.

“I cannot think of anyone else who is more deserving of this award,” Khan said. “She has been a great mentor to me in my life. She always knows how to help you find the answer to any problem or situation that you are in. She has an open-door policy that makes anyone feel comfortable approaching her. The fact that she believes in us as students and holds us to high expectations gives us the encouragement we need to do the best that we can. She’s just a phenomenal woman.”

Hammond takes every opportunity to connect with students. Beyond leading the USU, she also teaches graduate students in college counseling and student services. Teaching future student affairs professionals after a long day’s work at the USU reinvigorates her, Hammond said.

Vice President for Student Affairs and Dean of Students William Watkins called Hammond a “giant” within the profession, bringing positive recognition and visibility to CSUN.

“It says so much that her nomination sprang from the initiative of her colleagues, who have had the good fortune of working alongside her as she has transformed the lives of students and employees, developed countless student leaders, been an innovator in the field of student affairs, and shown exceptional creativity and leadership in developing excellent programs and facilities at CSUN,” Watkins said. “Beyond leadership skills, one finds in Debra a person who deeply cares about lifting and enriching the lives of others. On more occasions than I can count, I have stood back and watched as Debra’s eyes filled with tears of joy upon witnessing a student or employee achieve some success to which she had contributed. Debra Hammond is an exceptional human being!”

Hammond gave credit for her success to the university.

“The passion of the people here — that’s what gets you out of bed in the morning saying, ‘I’m going to work!’” Hammond said. “I’ve always wanted a job that didn’t feel laborious. It should be something that you want to do, where you are being of service, having an impact, contributing to a greater good. I feel like I get to do that every day.”