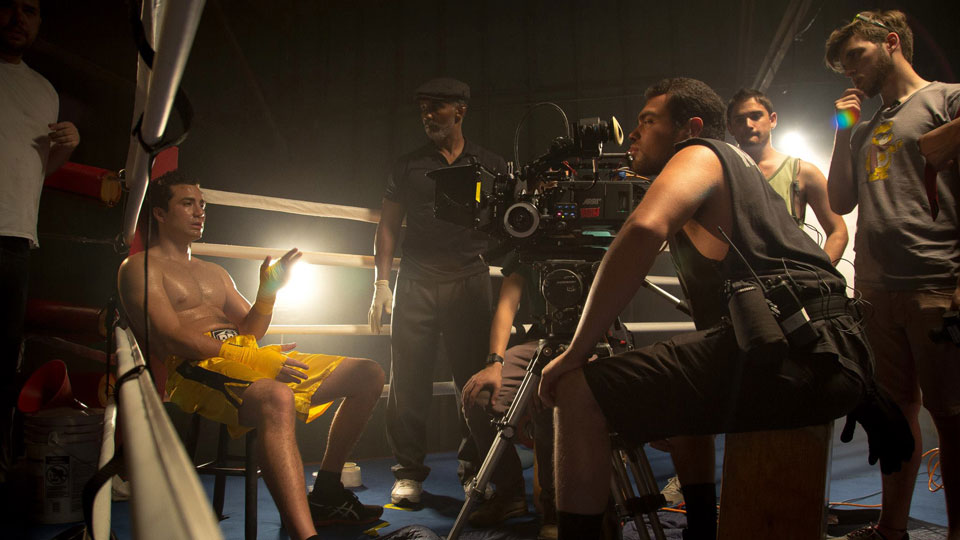 A scene from “Champion,” directed by Kevin Reyes, one of the works featured at CSUN's annual "Senior Film Showcase" last year. The Hollywood Foreign Press Association has awarded CSUN $2 million to support students in the university’s acclaimed Department of Cinema and Television Arts.

A portion of the grant will go toward creating endowed scholarships to support underrepresented film and television students in the industry. Scholarship recipients will be declared Hollywood Foreign Press Association Scholars and be mentored by department faculty and industry professionals.

HFPA President Lorenzo Soria expressed his enthusiasm and hopes for what the grant bestowed upon CSUN will bring.

“The Hollywood Foreign Press Association is thrilled to continue its relationship with CSUN, which now spans nearly two decades and has provided invaluable opportunities for deserving students to hone their craft,” Soria said. “We believe that by empowering the filmmakers of tomorrow, we can ensure that our industry is left in good hands. We hope that these gifts will open doors that otherwise wouldn’t have been there in the first place.” “The new $2 million from the Hollywood Foreign Press Association will allow a diverse group of underrepresented students to study with us and transition into the tough industries that make up the cinematic arts,” Thomas said. “The students selected to become HFPA Scholars will come from mostly working-class backgrounds. This gift will literally make the difference between mere artistic aspiration and actual fulfillment of dreams. The Hollywood Foreign Press Association is at the forefront of helping to attain needed positive change in the entertainment industry, and ensuring that tomorrow’s filmmakers reflect the wide diversity that their audiences consist of.”

Noting that the HFPA’s gift includes money for purchase and maintenance of new film and television equipment, Thomas said the gift “will ensure that the many students that we serve will cultivate their art and craft on state-of-the-art equipment, since no tools change as quickly as the tools of the film arts.”

To date, the HFPA has committed more than $23.9 million in grants, handed out over 1,000 scholarships and helped restore 90 films. Last summer, the HFPA continued their long-time tradition by awarding more than $2 million in grants at their annual Grants Banquet. The donations benefit a wide range of projects, including higher education, training and mentoring, and the promotion of cultural exchange through film.

CSUN’s relationship with the association dates back to 1996, with an initial gift of $500. Prior to this announcement, the association over the years has nearly given CSUN a total of $1 million to support student film projects and keep CSUN’s film program current with the latest technology. Students edit in the Hollywood Foreign Press Association Senior Film Edit Suite on campus, and work on sound design in a state-of-the-art sound mix facility made possible by a grant from the association.

“Everybody in this industry talks about diversity, but it remains mostly talk,” Thomas said. “The HFPA is willing to use its money to make change, and to train the next generation of filmmakers and industry practitioners who come from and reflect the lives of their audiences.”

Jon Stahl, chair of CSUN’s Department of Cinema and Television Arts, thanked the HFPA for its “remarkable level of generosity and support, and for the faith in us and our mission that this grant represents.”

“The HFPA grant will allow us to enhance and upgrade our production and post-production facilities, bringing them to a level commensurate with the excellence of our program,” he continued. “Additionally, this wonderful grant will allow us to provide direct scholarship support to several of our most deserving students, many of whom are the first in their families to attend a university.”

“We are grateful to the Hollywood Foreign Press Association for their generous support of our students and our programs,” he said. “This gift will provide much-needed scholarship support for our students and provide them with state-of-the-art facilities to go along with our exceptional faculty. Combined with our close proximity to the heart of the entertainment industry, this gift will allow us to offer an unparalleled educational experience in the cinema and television arts.”

Serving more than 40,000 students each year, CSUN is one of the nation’s largest single-campus universities in the U.S. and is the third largest in California. CSUN ranks 10th in the country in awarding bachelor’s degrees to underrepresented minority students, fifth nationally in awarding master’s degrees to Hispanic students, and it enrolls the largest number of deaf and hard-of-hearing students of any U.S. state university.

About the Hollywood Foreign Press Association:

Founded in the 1940s during World War II, the HFPA was originally comprised of a handful of LA-based overseas journalists who sought to bridge the international community with Hollywood, and to provide distraction from the hardships of war through film. Seventy years later, members of the HFPA represent 55 countries with a combined readership of 250 million in some of the world’s most respected publications. Each year, the organization holds the third most watched awards show on television, the Golden Globe® Awards, which have enabled the organization to donate more than $23.9 million to entertainment related charities and scholarship programs. For more information, please visit www.GoldenGlobes.com and follow us on Twitter (@GoldenGlobes) and Facebook (www.Facebook.com/GoldenGlobes).