At California State University, Northridge, the mission of the Younes and Soraya Nazarian Center for the Performing Arts (The Soraya) is to present performances that include new and original work from Los Angeles, as well as work from around the world that appeals to its diverse communities.

In a first since in 2011, this year The Soraya is engaging its first artist-in-residence, acclaimed violinist Niv Ashkenazi.

Ashkenazi’s residency is part of a collaboration between The Soraya’s Art Education program, which serves CSUN students and more than 10,000 K-12 local students, four Southern California symphony orchestras and The Violins of Hope – a collection of instruments rescued from and restored after the holocaust, in Tel Aviv, Israel. 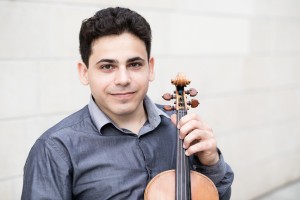 “It’s an honor to be the first artist-in-residence at The Soraya and to get to collaborate with them on their Violins of Hope programming this year,” Ashkenazi said. “I’ve had the opportunity to see firsthand how much care the team puts into everything they do and how passionate they are about presenting the most impactful performances in the best possible way. As someone who grew up in Northridge, it means a lot to me to have a venue of this caliber close to home.”

As the only individual in North America entrusted with a rescued violin on long-term loan from The Violins of Hope collection, Ashkenazi will share the stories of the violins with students in the San Fernando Valley in more than 30 in-school visits. During these visits, students learn the history of the Holocaust and the violins in the collection, listen to Ashkenazi play the violin and hear Anthony Cantrell, director of The Soraya’s Arts Education program, read aloud a story from the book Violins of Hope by James A. Grymes.

“Each school is a unique experience, because of the diversity in the communities that we are visiting, and also because we are working with a wide range of ages,” Ashkenazi said. “My primary goal is to represent those stories and that message in the best way that I can. I hope that our workshops are giving students a way to engage with a very difficult subject in a way that gives them a new perspective and a vehicle to continue to ask questions and learn from their teachers.”

“In my time here, this is absolutely the most significant, the most potentially impactful, and the most ambitious program we’ve ever done,” Cantrell said. “To have professional artists and Niv’s residency partnered with us to fulfill The Soraya’s mission, is extraordinary.”

Violins of Hope was founded by Amnon Weinstein, a master violin maker in Tel Aviv. For the past two decades, Weinstein has restored violins played by Jewish musicians during the Holocaust. His work is dedicated to the relatives he lost when his parents immigrated to Palestine in 1938. Although most of the musicians who played these instruments were silenced by the Holocaust, their voices and spirits live on through the violins Weinstein has restored.

For more information on The Violins of Hope, visit https://www.thesoraya.org/violinsofhopela.