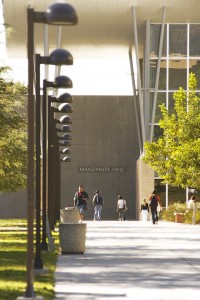 Thanks to a powerful combination of renowned faculty, industry-standard facilities and new strategic partnerships with Epic Games and Halon Entertainment, CSUN continues to be recognized among the top film schools in North America.

Once again making Variety’s “30 Top Film Schools in North America” list for 2022, CSUN’s Department of Cinema and Television Arts (CTVA) was commended for positioning students for leadership roles and nurturing their unique voices from diverse backgrounds.

The prestigious trade publication named CSUN along with renowned institutions such as USC, UCLA, NYU, Columbia University and the Centro de Capacitación Cinematográfica in Mexico.

“One thing that puts us up in the higher echelons of film schools [is] the stellar instructors — the degree to which the faculty really care about what they do and how devoted they are to the students,” said Jared Rappaport, chair of the CTVA department, in CSUN’s Mike Curb College of Arts, Media, and Communication. “We are fortunate to have students coming from diverse backgrounds who feel empowered to tell their unique stories. We have a reputation in the film industry, that our students graduate with a strong work ethic and are prized for their ability to work cooperatively.”

In addition to the Variety recognition in April, CSUN was named to The Hollywood Reporter’s latest “Top 25 American Film Schools Ranked” list, at No. 24.

The publication credited the program with acting as a pipeline to the industry’s executive ranks and for its expansion of virtual production, as well as its affordable tuition for aspiring film students. The ranking also named notable alumni such as Arielle Kilker, a two-time Emmy Award-winning editor, and Glenn S. Gainor, head of physical production at Amazon.

Breaking into the Top 20 for the first time, CSUN also was featured recently in The Wrap’s “Top 50 Film Schools of 2021” list.

The online publication commended the program for adding prestigious faculty including producer Christina Sibul (“Sideways, “Thirteen,” “House of Sand and Fog”) and producer Patricia Carr (“The Good Doctor”), as well as for joining the Green Film School Alliance — whose members are committed to sustainable production practices. The CTVA department continues to make a name for itself and its students, Rappaport said.

“[Recognitions like these] are important because it shows our standing in the world,” he said. “The fact that our students are coming out of a highly ranked and well-respected film school gives them an edge when competing for industry jobs. And that is our goal — to prepare students for life after graduation.”