In the 1980s, there was no album bigger than Michael Jackson’s “Thriller” — the biggest commercial hit in recorded music history. And there were fewer commercials bigger than the public service announcement “This Is Your Brain on Drugs.”

One can hear CSUN alumnus Brian Banks ’78 (Music) on both.

With an eclectic and highly successful career that has spanned five decades, Banks has contributed music and sound to some of the biggest names in music as a composer, pianist, keyboardist and synthesist and to the biggest brands in the world for advertising.​ Now Banks has embarked on one of the most creative works of his career.

“There’s one overriding story, which is: Who is going to save fairy tales, and hence, save the world? Because without these cultural tales, humanity doesn’t really exist,” Banks said. “Fairy tales are really important because they’re the stories that parents use to teach children about how the world works — what’s good, what’s bad.”

But behind the overriding story is Banks’ ingenuity — a trait that has followed him throughout his career.

Banks’ musical career can be divided in three verses:

1. He has been a session musician working with some of the biggest names in the business.

2. He has been a composer supplying music and sound for advertising. And now, 3. He is the musical wizard behind “Outta the Books.”

In creating music and sound for advertising, his client list included Apple, Visa, Budweiser, Mercedes Benz, Disney, and Mattel — the latter two recently gave him the spark of inspiration to envision a musical for children.

“I got really good at writing music for parents and kids,” Banks said. “I decided to do something for that market that wasn’t advertising-based but that was more entertainment-enrichment based.”

Banks began writing songs to retell the original stories of fairy tales, such as “Cinderella,” “Snow White” and “Little Red Riding Hood.” After playing the songs, including the Cinderella-themed “If the Shoe Fits, Wear It,” for colleagues and friends and getting positive feedback, Banks connected with Toronto-based writer Erica Ehm and finished a draft for a one-hour musical.

Then, COVID-19 swept through the world.

Knowing he had a strong idea, Banks, with the support of Ehm and his wife and executive producer, Sarah, adapted the concept to video form.

To do this, he and a global production and talent team used virtual technology to turn “Outta The Books” into modern-day storytelling that incorporates live acting, animation and music. 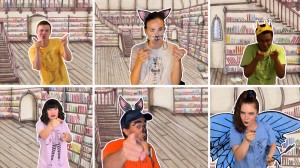 “How do you do it? We’re all on lockdown,” Banks said, explaining how it all came together. “I continued to cast with my director, Neil Fisher who is based in Liverpool (England). My writer, Erica, was in Toronto. I’m in Los Angeles. We cast this with nine actors from Northern England to Los Angeles. And we did the whole thing directed over Zoom. So, everybody shot themselves on their own iPhones. We sent them all green screens. We sent little shotgun microphones that plug into the lightning port of the iPhone, a little tripod, a little ring light to supplement whatever lamps and light they had in the room. And then, we directed everybody on their own bit, scene by scene.”

Additionally, Banks’ daughter Charlotte, a recent fashion design graduate of Manchester School of Art, made costumes for the actors and sent them to their homes.

The series debuted this year, and the music followed on Spotify.

Banks hopes to grow “Outta The Books” and distribute the series through other media. He also envisions incorporating fairy tales and folklore from Asia, Africa and South America.

“If I can show a Chinese fairy tale to someone in Omaha, they can see that those people are just like you. They just live over there,” Banks said. “They suffer and they aspire, too. I would hope it would help to bring the world a bit more together because we can see how these stories relate to the basic human condition.”

A third-generation San Fernando Valley kid, Banks chose to go to CSUN primarily to be near his mother and sister. After the death of his father in 1970, Banks’ mother raised the two children. She is a fine pianist and passed her talent and wisdom on to her son.

Banks studied classical piano at CSUN. His dreams of rock stardom or large-scale piano performances shifted during the time that Banks was a student at CSUN.  While attending the university, he was able to land a job at David L. Abell Fine Pianos. In Abell’s 2006 Los Angeles Times obituary, he was regarded as the “Piano Dealer to the Stars.” His clientele included Tony Bennett, Quincy Jones, Gene Kelly, Frank Sinatra, Elton John, Stevie Wonder, Andre Previn and John Williams.

“There, I met everybody,” Banks recalled. “I met every studio musician that played keyboard. And not only did we do pianos, but we did synthesizers, and in the mid-’70s, having a whole synthesizer department was esoteric beyond belief.”

A fellow salesman named Clark Spangler was also fast becoming one of the music industry’s top synthesists, having worked with Neil Diamond, Carole King, Wonder and Jones in the 1970s. For Banks, a side benefit of working alongside Spangler was receiving synthesizer lessons.

Banks became so adept at the instrument, including teaching himself how to use one of the most desirable and expensive synthesizers at the time — the Synclavier — that Spangler passed along session opportunities to him. Banks also became Synclavier’s sales rep for Southern California.

In 1982, Jones was working on an album for Michael Jackson and heard the Synclavier through Banks’ colleague, Tom Bahler.

“Oh, we got to have this all over the record. This is nice,” Jones told Bahler. Bahler called Banks up.

“’Would you like to work on Michael’s next record, because they want to use a bunch of Synclavier?'” Bahler asked, Banks recalled. “I said: ‘Yeah, sure.’”

That record became “Thriller,” the best-selling album of all time.

Banks also worked with synth-pop maestro Giorgio Moroder on numerous projects, and Jones again on the music for the movie “The Color Purple.”

Eventually wanting to focus on one area, Banks chose to specialize in sound and music for advertising.

By 1987, Banks had been doing work for an ad agency that held the account for the nonprofit Partnership for a Drug-Free America.

“The agency said, ‘Look, we’re doing this anti-drug PSA. Can you do us a favor? Can you give us a little bit of sound design and a little bit of music? We don’t have any money, it’s just a PSA,'” Banks recounted. “I said, ‘Sure.’ So we did that, and yeah, it was the ‘Thriller’ of commercials.”

In the “This Is Your Brain on Drugs” commercial, a low note hits as butter sizzles on a frying pan. Then, an egg drops and fries. Banks created the sounds.

In 1997, Entertainment Weekly ranked it as the eighth-best commercial of all time, and in 2019, Adweek listed it among “The 11 Most Memorable Jingles and Slogans From 1980s TV Ads.”

Over the years, the music and sound he created became associated with industry giants, creating connections from products to viewers.

“I didn’t realize you could [choose this path in music] when I was at Cal State Northridge,” Banks said. “I was going to be either a classical pianist or performing pianist, or a rock star.”

But Banks attained foundational knowledge at the university that has helped him write three verses of an extraordinary career.

“The best chunk of knowledge that I got that helps me on a daily basis today, I got from my music theory teacher, Beverly Grigsby. She taught my very first class of my very first day at CSUN. She challenged me and showed me how music works,” Banks said.

“I learned how to take music apart and put it back together. When you do this kind of work for a living, you have to be able to understand lots of different genres of music, because when you’re working in the media, people ask for different things. … I think that’s the biggest chunk of knowledge that’s put me in good stead today.”