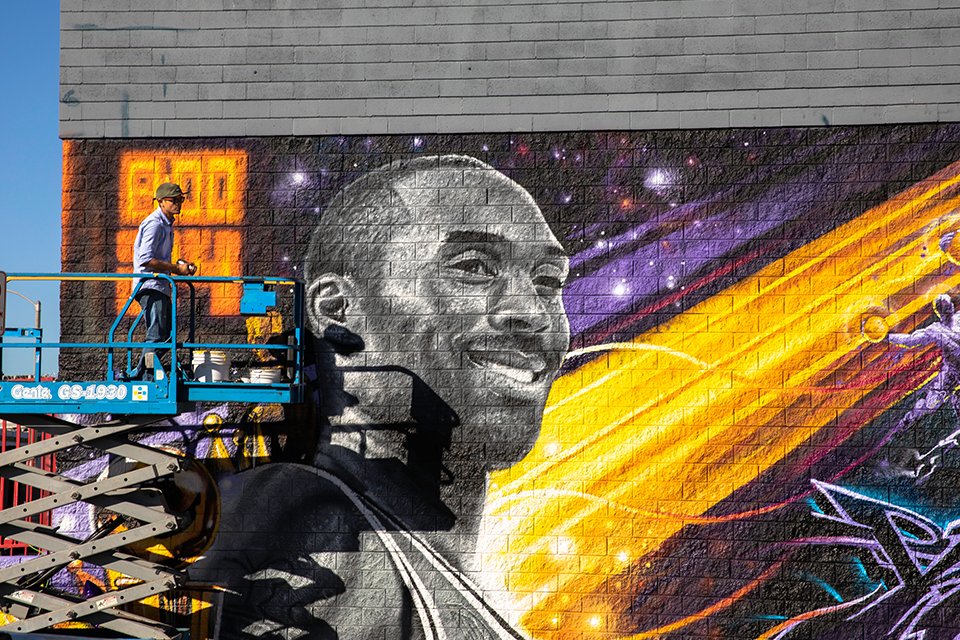 On Feb. 1, muralist and CSUN alum Levi Ponce completed this mural in the Fairfax district of Los Angeles to honor the late basketball legend, Kobe Bryant. Photo by Lisa Lee.

Bright streaks of purple and gold, a towering NBA championship trophy and the beaming face of the late basketball legend Kobe Bryant took shape on the formerly blank brick wall of a custom auto shop — stopping passersby and fans in their tracks at the corner of West 1st Street and South La Brea Avenue.

Artist and CSUN alumnus Levi Ponce sprung into action and completed this mural Feb. 1 in Los Angeles’ Fairfax district — in just three days — to honor Bryant, whose passing in late January struck a chord across L.A. The piece is one of many artworks Ponce has painted around the region, leaving a colorful and meaningful mark on the city and its diverse communities.

A homegrown Angeleno, Ponce ’09 (Art) has been painting murals since 2011. His (literally) towering portfolio includes murals of well-known figures such as Albert Einstein, Judy Garland, Salvador Dalí and Mahatma Gandhi, as well as his own designs. 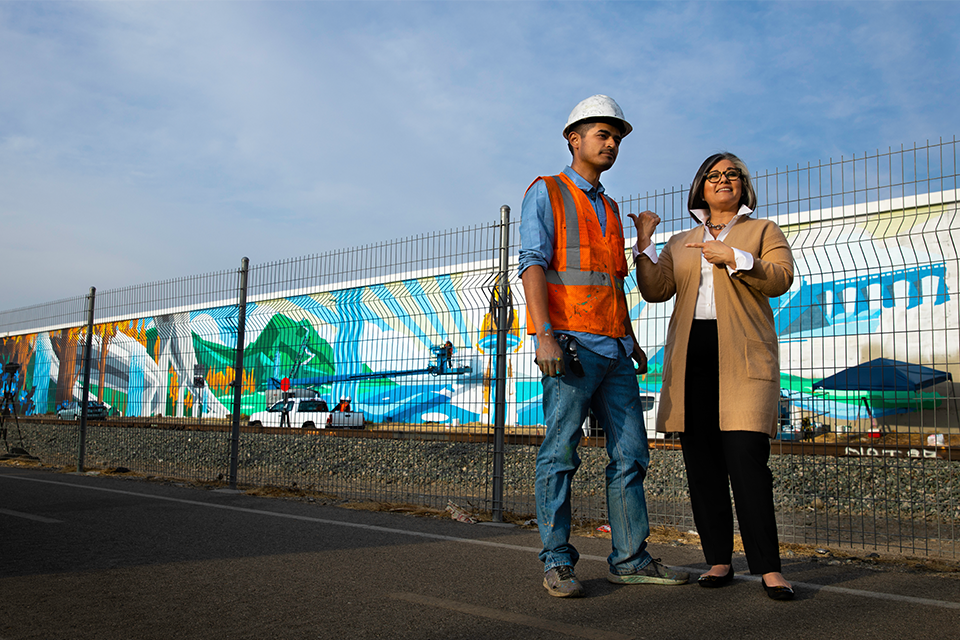 Ponce’s masterpieces have given him opportunities to meet with and paint murals of celebrities such as Quentin Tarantino, Katy Perry, Danny Trejo and Cheech Marin (who also attended CSUN), and have been widely praised by the community and media, including the Los Angeles Times and The Huffington Post.

After studying animation, with an emphasis on three-dimensional art, at CSUN, Ponce spent years continuing to hone his creative skills. His career went from designing characters and background art for animation, to doing visual and practical effects for films such as “Interstellar” (which won the Academy Award for Best Visual Effects) and “Star Wars: The Force Awakens.”

During the same time period, he completed work for Disney Imagineering, contributing to some of Disneyland’s and Disney World’s most-loved attractions, including “Frozen Ever After,” “Toy Story Midway Mania” and — Ponce’s favorite — the Millennium Falcon for “Smugglers Run.” Around the parks, too, he painted large-scale murals, which eventually became his top artform of choice.

Painting on the Streets

Often painting human subjects, Ponce said he gets to apply a lot of what he learned from CSUN art professor Ken Jones, who taught him a way to look at complex anatomy in a simpler way. Ponce said Jones, who was a humorous and lighthearted instructor, advised students to “see the bean” — that is, to find the small bean shapes that together form the larger anatomical form.

When asked how much of what Jones’ lessons Ponce still applies, he said, “All of it.” 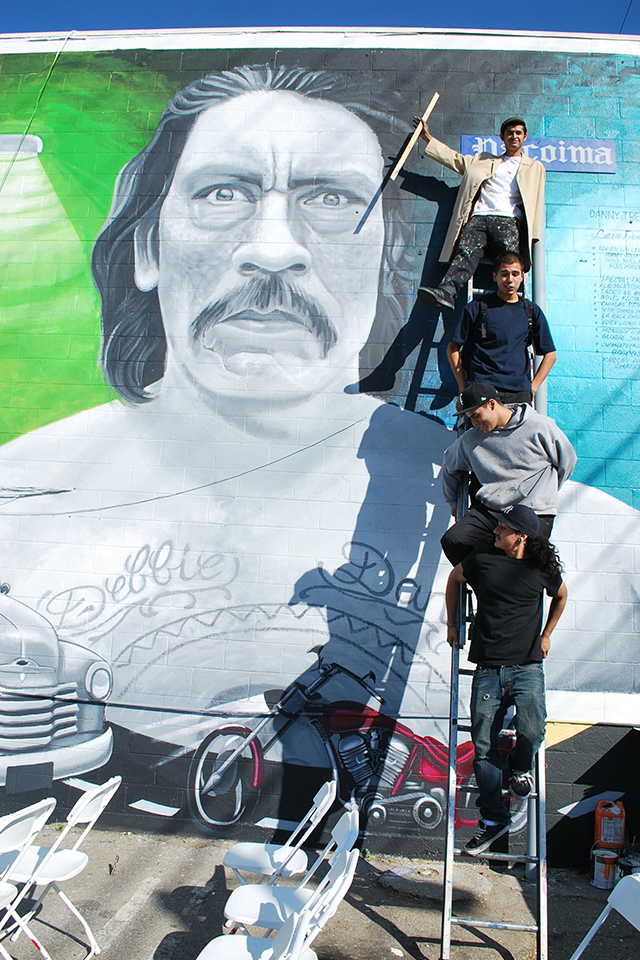 Like most of his murals, Levi Ponce completed this Danny Trejo mural in Pacoima along with a team of painters. Photo courtesy of Levi Ponce.

Ponce had been a student of the craft practically since he could walk. He learned from and worked alongside his father, who was a sign painter. The job entailed painting lettering on windows, signboards, storefronts and more. It gave Ponce a strong background in graphics and the ability to work in non-studio environments.

That knack for working in those environments, Ponce said, is what sets apart a muralist from other painters.

Mural painters have to endure city elements they can’t control — changing sunlight and temperature, rain and wind, which pose challenges for painters.

On top of that, Ponce said, muralists need social skills and the ability to talk to and work with the surrounding community. This entails handling complaints by some residents who may deem the work disruptive to the neighborhood, or even as simple as managing the foot traffic of passersby.

Painting with a Purpose

Ponce said the process of taking a pint-sized idea to a king-sized product often involves working with more than one pair of hands.

One of Ponce’s most significant works is a 10,000-square-foot mural along San Fernando Road in Pacoima. Titled “Rushing Waters,” it’s one of the largest murals in the San Fernando Valley. It took 12 days and 10 other painters to complete in November 2019.

He compared his team to a jazz band. Each member has a forte with their own ‘instrument,’ he said, whether it be brushwork, aerosol or other. As the designer of the artwork and the lead artist, he said, “I try to arrange ‘music’ where everybody has their moment to shine.” 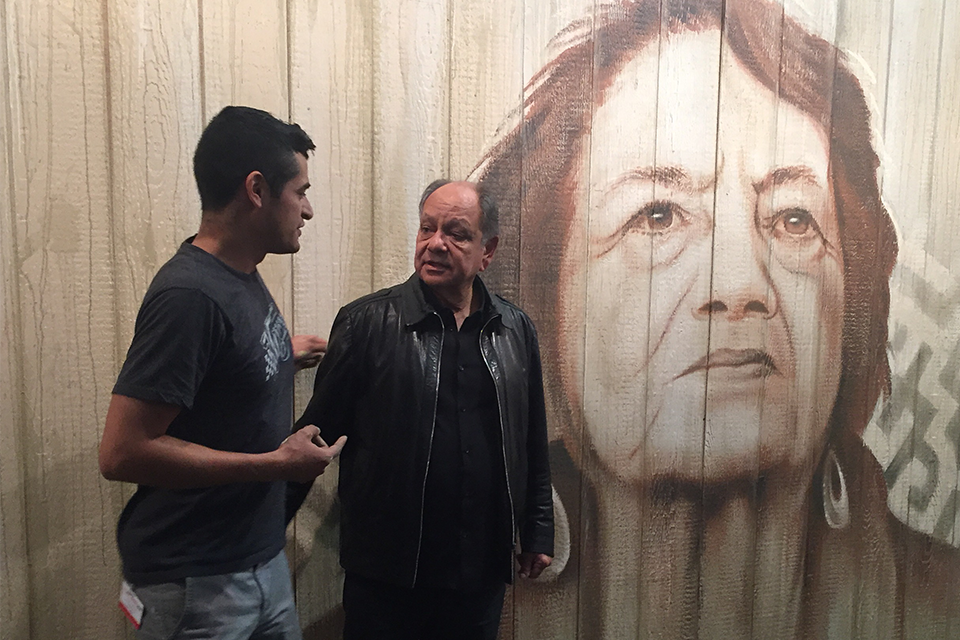 The success of his murals and his growing reputation has taken Ponce around the country and abroad. Beyond L.A., he has painted murals in New York, Florida, Tennessee, Ohio, Mexico and Guatemala.

However, the most important thing is not where his murals take him, but what his murals do for others, specifically for his fellow members of the Latinx community, Ponce said.

“I’m not a lawyer and I’m not a politician, but I’m a painter. And I can do my part to better represent our populace here in America, by way of paint,” he said.

In the future, Ponce said, he hopes to continue showcasing his artwork outside of his home city and bring his voice — and the voice of his community — to the world.

To other Matadors, artists or not, he said, “I chose paint because that’s what I did, so that’s what I worked with. But everybody has the ability to have a positive impact in their community and the areas around them with what they have and what they do now.”