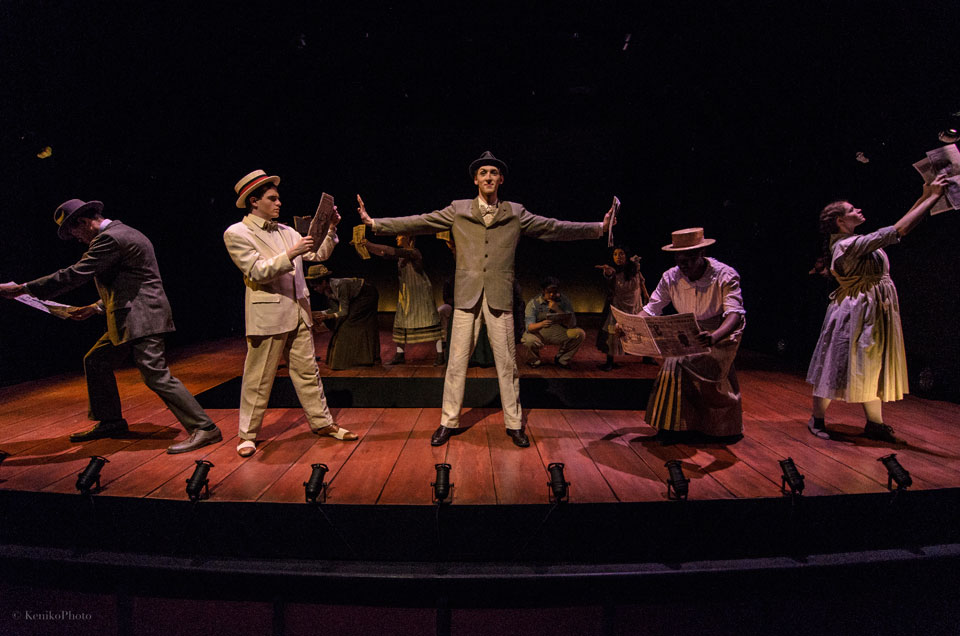 A scene from a production of "Parade" by CSUN's theater department earlier this year. Photo by Kenji Kang.

California State University. Northridge’s Department of Theater and its acclaimed Teenage Drama Workshop (TADW) will celebrate their 60th anniversary next week with a party to mark the accomplishments of their alumni, as well as celebrate the possibilities the future holds for both programs.

The celebration is scheduled to take place at 7 p.m. on Wednesday, May 11, in the Campus Theatre, located in Nordhoff Hall near the southwest corner of the campus at 18111 Nordhoff St. in Northridge.

“Sixty years is a long time, and a lot of students,” said Garry Lennon, former chair of CSUN’s Department of Theatre and currently special assistant to the dean of the Mike Curb College of Arts, Media, and Communication. “We figure that in the department alone, we’ve done more than 600 productions over that time, and that doesn’t even factor in TADW. If you add its productions, then we’re probably well past 800, not counting the ones the students put on themselves or specials events. That’s a lot of theater that has touched a lot of lives, both on campus — in terms of our students, faculty and staff—and off, when you think of the hundreds and hundreds of members of the community who have come to our productions.

“It’s kind of amazing,” Lennon continued. “But when you think about it, it demonstrates the rich tradition that theater and education have in the San Fernando Valley. In many ways, theater is the foundation of education — story telling, passing on information and sharing information. That’s what we do in the arts.” The theater program of what is now known as California State University, Northridge, started as part of the satellite campus of what was then Los Angeles State College (now Cal State L.A.) in 1956. A year later, as a way to foster a relationship between the community and the campus and to enrich the social and cultural life of the area, the department opened Teenage Drama Workshop to offer teenagers in grades seven to 12 a conservatory theater experience that included voice, acting and dance classes, as well as professiona-quality stage productions.

When San Fernando Valley State College officially opened in 1958, the two theater programs already laid the foundation for the institution’s ties to the community. TADW, now a summer program, is considered to be one of the oldest drama programs for teenagers in the United States.

“It’s exciting to see the aspirations of the young people who come through TADW over the years, and then see many of them enroll here at CSUN in our theater, music and other programs,” said theater professor Doug Kaback, TADW’s director. “It’s inspiring to see them become part of the creative community — not just in theater, but in all areas of the arts.”

“Our alumni work in all aspects of the business, whether they are on stage and in front of the camera or behind the scenes directing, designing the sets and costumes, working as technicians or in the front office,” said Ah-jeong Kim, acting chair of the Department of Theater. “Our alumni are everywhere.”

Lennon said he hopes to see many of the alumni next week at the anniversary celebration.

“It’s the perfect opportunity to reflect on all the things we as a department and our alumni have accomplished over the years, and to consider what the future holds, and where theater should be in 20 years and the role CSUN will play in that,” he said.