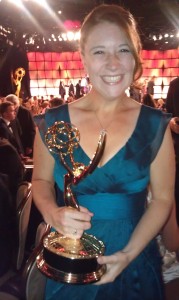 Lacey Dyer with the Emmy. Photo courtesy of Lacey Dyer.

Nearly four years after receiving her bachelor’s degree, she returned to the classroom to pursue a master’s in screenwriting, landed her first full-time writing job in television and this summer won a Daytime Emmy as part of the writing team for the NBC soap opera “Days of Our Lives.”

“It’s been one of the best and worst years of my life, but certainly a time I will never forget,” Dyer said. “I know that sounds cliché, but it’s true.”

Jon Stahl, chair of CSUN’s cinema and television arts department and a professor in Northridge’s master’s in screenwriting program, said he has been impressed at how Dyer, who will complete her degree this semester, has managed it all.

“She was working with ‘Days of Our Lives’ for a while,” Stahl said. “They work at a frantic pace, yet she managed to pull it off. She’d go to work during the day and then come to class at night. She is putting what she learns in the classroom to work in the professional world. She’s a professional and has been recognized by her peers for her work as a professional with the Daytime Emmy. It’s an extraordinary honor.”

Dyer, 26 of Glendale, grew up in a small Maine farming town, Presque Isle, not far from the Canadian border. After earning a bachelor’s degree in television and video production from Emerson College in Boston, Mass., she moved to the Los Angeles area to pursue a career in the entertainment industry. She soon landed a job with “Days of Our Lives,” one of the longest-running scripted television programs in the world.

“I started as an intern right after college, then hit a lucky break and was offered a position as a writer’s assistant,” Dyer said. “I did that for about three years when I decided it was time to move on and left for a new gig at Nickelodeon. As soon as I left, there was a big change in the writing staff. New writers were brought in and I was lucky enough to get my spec (script) to the new head writer. Thankfully, he liked it and I was brought on as a writer two weeks later.”

Dyer said her experience at “Days of Our Lives”—she left the show in April—gave her an invaluable toolset that will help her in years to come.

“Because of the grueling schedule—I was pumping out at least one script a week—I quickly discovered the importance of time management and self determination,” she said. “I also learned some hard lessons. Rejection is a huge, huge part of writing. You put your heart on the page and sometimes its gets ripped apart. But you learn to deal with it and grow a thick skin.”

Dyer said she enrolled at CSUN in fall of 2010 to learn to be a better writer.

“A few years ago, when I was a writer’s assistant, I realized that I was spending so much time fixing other people’s scripts that I wasn’t finishing a single one of my own,” she said. “So, in an attempt to force myself to write, and, of course, to better my skills, I applied to the CSUN screenwriting program. Although it’s been stressful at times, juggling work and classes, I am extremely grateful that I decided to apply. I’ve learned a tremendous amount and made some wonderful friends.”

With a degree soon in hand, Dyer, said she is looking forward to the future.

“I never in a million years would have thought I’d be writing for a soap, but it happened and I loved it,” she said. “I would be happy to continue writing soaps, but would very much like to have a successful career in primetime comedy.”

Stahl said he has no doubt that whatever direction Dyer’s career takes, she will be successful.

“She’s a fantastic writer, and we’re proud to call her one of our own,” he said.

Cal State Northridge’s Department of Cinema and Television Arts, housed in the Mike Curb College of Arts, Media, and Communication, has an international reputation for producing dedicated and talented entertainment industry professionals who recognize the value of hard work as they learn and continue to perfect their crafts. The department’s alumni work in all aspects of entertainment media, from writing, producing and directing to manning cameras and having the final say in what project is made.